In reading through all these Giant-related adventures and sourcebooks, occasionally some ideas sparked - things I would want to try, were I writing up some adventure sites for each of the classic Giants.

Early on, after reading Crypt of the Death Giants, I knew doing something with a giant tomb or burial complex would be a fun write-up.  For whatever reason, rather than thinking about the big giants, my mind went immediately to hill giants - in particular hill giants as mound-builders, late paleolithic or early Bronze Age, that sort of thing.  The trick here is how to make the site interesting without just saying "okay, undead hill giants".  You'd want some of that, yes, but unless it's a small site, there would need to be something else going on.   Maybe throw some modern-day hill giants into the mix, some internal strife or rivalry.  A question of royal descent, or rival ancestor cults, so "who is actually buried here" starts to matter more than the cool-factor of bashing undead giants (which is still cool, but benefits from some slight context).

Stone giants are more difficult for me.  We've seen several riffs on making stone giants memorable beyond the Monster Manual basics, and I think some of them (stone giant monks!) are a bit of a stretch.  How do you do novel stone giants without doing the same "talking to stones", stone shape, rock carving rune stuff?  Maybe this is the spot to indulge my love of "giants on huge beasts".  Purple worm?  Could we do a Mad Max gang of stone giants who ride small purple worms or other beasts through the ancient colossal worm-tunnels? 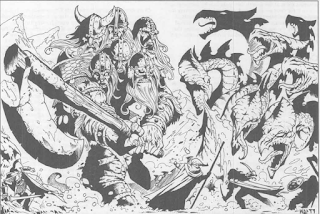 For the storm giant, I'd write up a single storm/sea giant who lives in a lake and really play up the tutelary spirit angle.  The giant is the lake and the lake is the giant, and the smallfolk of the fishing village treat him like the demigod he is.  Perhaps I'd make him a literal demigod, and truly tied to the lake - as in, he can't leave.  Maybe his ancestors could, back when the lake was better-tied to rivers and things, but with the changing landscape this isolated mountain lake is both the giant's kingdom and his prison.  You could do the whole thing where he needs a bride, that would be suitably fairy-tale.  You think the PCs want to be matchmakers for the lake giant?  What would they get out of it?  Things to think about.

I know for a frost giant location I'd want to eschew the traditional "frozen viking" thing and use a different skin for the frost giants - probably do a riff on cartoon Soviets.  Frost giants with ushanka and furred longcoats, then riff on either Soviet-era nonsense or Peter the Great type stuff as desired.  I have this mental image of a potemkin village sculpted out of ice, but I don't have a why yet, and that's what would have to drive the adventure.  But a setup with a Dear Leader/Burgomeister Meisterburger type, with limited troops, might suggest a scenario more appropriate for sneaking around by PCs of lower than standard level for dealing with frost giants, and that would have some value.

The idea of a vast subterranean fire giant city intrigues me, but I think that's too ambitious to actually write up in a shareable form.  Perhaps a mountaintop trading post where the fire giants interact with other giants, or other races.  What would such a thing look like, and who would visit it?  Maybe envision a mixture of frontier trading post and a stock exchange.  I like the idea of it, but I haven't figured how to weaponize it as a useful adventure site yet.

Finally, for the cloud giants, it has to be a cloud island.  In this case, I'm thinking of a cloud giant palace with a village on the large island, fallen into disrepute.  The previous ruler(s) are gone, and now the spendthrift, layabout son is in charge, and this new Raja is a mess.  He's turned the place into a debauched salon for all of his hipster friends where they lay around drinking fashionable beverages, talking petty trash, pretending to be philosophers, that sort of thing.  Is there something up there the PCs need?  Is it worth overthrowing the Raja?

I've jotted all these down in a googledoc and will keep messing with them.  Who knows, maybe they'll see full writeup here on the blog, or via another venue eventually.  The key to these things is to keep thinking, keep experimenting, and most of all - keep playing. 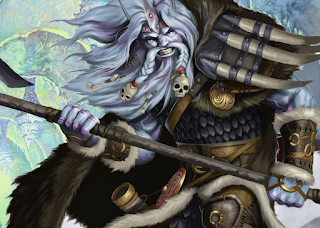