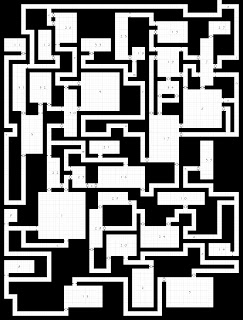 We had a good time with Jason's Sanctum, and it was fun to see him get even more frustrated than we were ("Another stuck door, yay...").  There was an NPC party we ended up tussling with, and they had some nice magic items, so it was all totally worth it.
Posted by Erik Jensen at 8:31 PM 1 comment:

As one does, I occasionally think about GMing and "how it's done" and that kind of rubbish.  This week's random GMing thoughts are here distilled into a terribly-pretentious student/Master dialogue, because that's what I felt like doing.  So nyah.  Let's be clear here - I make absolutely zero claims at being some sort of GM guru or the sort of person who ought to be dispensing advice.  This is what comes of an idle Sunday afternoon, I suppose.

A student asked the Master: "Master, I have been told I am skilled at a thing.  That thing is also something I greatly enjoy.  Now I wonder whether I developed the skill because I loved the thing, or whether I love the thing because I display talent at it.  Which is true?"

The Master replied:  "What does it matter?  The two are surely interrelated, this is natural.  Which spawned the other is meaningless rumination.  Be good at what you are good at, and enjoy it."

The student said: "There are also skills at which I fail.  I lack talent in those areas.  Should I no longer attempt these things?"

The Master replied: "Do not abandon your attempts purely because you do not succeed.  Giving up is the truest failure.  A wise man acknowledges both his strengths and weaknesses; he improves upon his strengths, and improves upon his weaknesses as best he can.  It is good to know who you are, and to be that - but do not make excuses for your failures.  Strive again."

A student asked the Master: "When I see something which I judge as successful, I try to puzzle out how it came to be, so that I may replicate it.  How may I do this?"

The Master replied: "Think less.  You see autumn leaves scattering on the breeze and judge it beautiful; your impulse is to diagram the winds, when instead you should spend time being a leaf."

The student said: "I do not understand, Master.  I see others do amazing, creative things - is there no way to understand their method?"

The Master replied: "Even if there were, their method is not yours, as you are not them.  You envy the creative impulse in another and seek to replicate it stroke-by-stroke, as a forger copies a painting.  Instead you must embrace your own creativity, and find your own strokes."

A student asked the Master: "The creative act seems chaotic, or to benefit from chaos.  To truly embrace creativity, must I embrace chaos?  Should I be driven by whim or randomness?"

The Master replied: "Do not embrace chaos; harness it.  You see the incomprehensible, passionate swirl of nature and presume you must be chaotic or random to replicate it; that is false.  Too many see the beauty of life and seek to imitate it in this fashion; but most of those who attempt reckless abandon manage only recklessness.  The goal is not reckless abandon, which smashes chaos against chaos, but joyful abandon which brings together many hearts in a single creative complex."

A student asked the Master: "I am afraid that if I participate with abandon, my friends will think me silly or no longer respect me."

The Master replied: "If your friends know you to be so fearful and untrusting, then they do not respect you now.  The display of confident vulnerability earns trust."

A student asked the Master: "I worry that my endeavors are poor, and may anger or alienate my teammates."

The Master replied: "If your teammates come back for more, your endeavors were good, and you will strive to make them even better.  If your teammates abandon you, then it is they who have been uncharitable - especially if they refuse to communicate to you how you have angered them."

A student asked the Master: "I understand in the abstract what I must do to lead my team, but I have difficulty applying those things.  How can I learn?"

The Master replied: "As I understand your group, you require communication and clear goals, and trust and mutual respect to succeed.  Who else needs these things?"

The student hesitated, then answered: "I have heard soldiers speak of these things.  And lovers."

The Master answered: "You speak truly.  There are your models."
Posted by Erik Jensen at 4:10 PM No comments:

Wampus Country is home to a number of defined tribes or family groups that can fairly be called 'barbarian', in that their ways are quite foreign to the civilized man.  Below are excerpts from the recent monograph A Civilized Child's Introduction to Savagery (various authors, Cobblestone Publishing, River-Town).

"CIVILIZED" TRIBES
When we refer to a barbarian tribe as 'civilized', we of course do not mean that they are any less potentially savage, or that they subscribe to the ways of rational men.  In this case the appellation is shorthand for recommended means of approach; to wit, a cautious man may trade and negotiate with civilized tribesmen.  This does not mean, however, that they should be taken at their word, and indeed many a merchant has spent the bulk of a transaction concerned that he should be clubbed or riddled with arrows long before he had gold in pocket.

CLOUD RABBIT
The most genteel of the barbarians, the Cloud Rabbit tribe span the length and breadth of the plains of Wampus Country.  Some families are semi-nomadic, while others maintain villages and farms.  Cloud Rabbits may be recognized by their characteristic long hair, colorful clothing, and partial adoption of civilized fashion (bowler hats seem to be in vogue of late).  The Cloud Rabbits worship a panoply of animal spirits, and have left their mark throughout the land by carving and erecting various totem poles depicting these heavenly beasts.

BLACK EAGLE
At the other end of the spectrum lie the Black Eagles, a tribe of bloodthirsty warriors of fearful mien.  Their tribesmen wear their hair in plaits, file their teeth to fine points, and often scar themselves during incomprehensible rituals saluting their dubious godlings.  Should you encounter a mixed group of Black Eagles - men and women - it is likely a family in transit, and may be safe to approach for trade or directions; but if you see a group of only young males on the next ridge, best to avoid what might be a party of braves out to prove their mettle against any convenient skull.

GHOST HORSE PEOPLE
To the north, the Ghost Horse people roam the steppes from the piney woods all the way to the glaciers.  They are accomplished riders, and cover both their own skin and that of their mounts with a bright white woad-like substance apparently made from clay.  Few merchants have had dealings with them, for the Ghost Horse will have no truck with civilized men who are known to deal with the Freeholders, who are their rivals.

FREEHOLDERS
Although they can be seen in northern towns, doing business and making merry, have no doubt that the Freeholders are a savage people.  Commonly bearded, with their fair hair braided and entwined with feathers, the Freeholders traditionally make their way by farming, hunting, and raiding those who settle too near their self-proclaimed boundaries.  And though they be drunken barbarians, do the Freeholders not, in their own way, embody the spirit of the frontier?  Freeholders worship a trio of sky-gods, and believe that their ancestors came from the heavens, and shall one day return thence.


MORIBUND TRIBES
Not every tribe once known still exists...

YELLOWSCALE
At the northern edge of Snollygoster Swamp, the Yellowscale tribe cloaked themselves in alligator-skins and attacked supply lines during Grandpa's War.  Although they were known merely to be opportunists rather than allied with the enemy, a punitive expedition was sent forth, and the Yellowscales were driven into the swamp and killed to a man.

CHEETAH PEOPLE
The quick-sprinting cheetah is very nearly an extinct species in Wampus Country, but we know they were once numerous enough to be worshipped by the putative 'Cheetah People', whose middens and artifacts we have found on the plains.  Dr. Hornapple suggests they may have been conquered by, or folded into, the Cloud Rabbit tribe, but the Cloud Rabbits themselves have no tale which reflects this.


"SAVAGE" TRIBES
Some barbarians should never be approached - their savagery knows no bounds.

BEETLE PEOPLE
Reports of a beetle-worshiping tribe to the east have not been well substantiated, but reportedly they wear horned headdresses and paint themselves green and purple.

THE DEATH-CLANS
During the tumult of Grandpa's War, three barbarian tribes allied themselves with the Great Desert Lich, and so live in ignominy - if they still live.  Different sources name the tribes variously, although one group was definitely the Rattlesnake People; all three peoples are suspected of worshiping fell powers long before the Lich got hold of them.