Smashing together some things the Boy came up with recently, with some lingering concepts adjunct to a session of (They Came From) Under the Waterless Sea I recently ran.  This isn't really Wampus content, although I suppose I could append it to one of the historical eras; I think it has more in common with the occasional DCC games I've been running.  Some of the implied setting there started when I ran Adrift on the Sea of Love at the beginning of the year, and later started banging together a DCC-appropriate late-Bronze-ish setting for running odds and ends (both adaptations of Goodman Games stuff, like Sailors, and classics like The Lost City).  It's floating around in the "Sinbad/Argosy, hoplites, and Polynesia" zone at the moment. 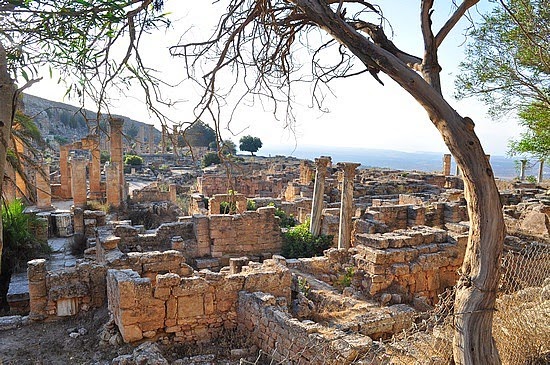 THE FALLEN PILLARS OF RAZZIOA

Those fallen pillars /scattered like gigant-bones by the furious hands of growling Gods, / the whispers of the rumor-mongering sea / echo through the rocky field of graves / where once stood proud Razzioa / the Lion's Hope reduced to dust

This is what most know of Razzioa - a small city-state, a colony founded by a noble family, which fell apart after its populace and rulers defied the Gods.  The city and its temples were destroyed in some physical cataclysm, and its people slain or scattered.  The ruins of Razzioa remain there, atop a windswept promontory, but few buildings yet stand; Razzioa is a scrambled mess of broken marble, rocks, crushed adobe, and rotten wood.  Among the rubble broken pieces of statuary stick out at akimbo angles - here, an alabaster hand reaches for the sun; there, a stern bronze head laid sideways upon a broken wall stares forever at the sea, as though waiting for a ship to come in.  The piers are long-gone, but Razzioa still provides a fine harbor, and may prove an inviting stop for travelers seeking adventure or a restock of food (persimmon and tamarind orchards now gone wild on the northern side of the colony; wild goats here and there in the ruins).

Razzioa was founded, those many years ago, by the Razzi line - a minor family of some nobility who had fallen out of favor, squandered most of their fortune, and were willing to gamble what remained of their money and reputation.  They piled into their remaining ships, flew their lion-and-dolphin banners proudly, and set off.  At first, Razzioa did quite well; the fishing was good, the land was nicely arable, and the weather mild.  The colony sat on potentially-lucrative tradelines between imperial lands and some of the stranger islands of the Sea of Woe.  The Razzis and their associates built up a respectable small city-state in a matter of a few generations - some say, aided by unsavory associations with pirates and slavers.

Eventually, things turned sour, as they are wont to do when a land is ruled by the greedy and foolish.  The governor of the colony, himself a Razzi, declared himself King - divinely-anointed by no less than himself.  Thus began the bloody reign of the god-king Malsippius, known in whispers as the Bootstrapper, and more poetically as The Demigod Who Invented Himself.  Malsippius ruled for thirty years with the aid of Razzioa's strong military and the now-quite-popular cult of Malsippius himself.  Mayhap the Gods could have ignored Malsippius as a curiosity, an object-lesson in the folly of mortals, but for the song.

Malsippius thought himself skilled at many arts - as is only right for a god and king - and composed a hymn to himself.  The lyrics of the song did more than praise Malsippius - they compared him favorably to several well-known Gods, and even disparaged some Gods as being less than the tales say.  Every citizen was mandated to learn the hymn, and practice it in preparation for the King's birthday; and when several thousand voices united to praise the god-king Malsippius at the expense of the rest of the Gods, the heavens opened up and the city-state of Razzioa was sundered.  By morning only rubble remained.


SOME PLACES TO SEEK ADVENTURE

The Marble Fields
What Is It: smashed ruins of the upper city
Of Interest: ruins to dig through for valuables; uneven ground
Threats: a pack of harpies led by a winged, brazen-clawed medusa; carnivorous animated statuary which lie in wait
A Thing To Do: restore one of the shattered temples to the Gods of Law to curry their favor

Smugglers' Caves
What Is It: wet cavern complex attached to harbor
Of Interest: former pirate hideout and all that entails
Threats: giant hellbenders, spectre of murdered pirate
A Thing To Do: assemble the clues hidden in the pirate cave paintings to reconstruct a treasure map

Cult Caverns of the Self-Made God
What Is It: dry caves hidden beneath ruins
Threats: a devil in chains which whispered to Malsippius and drove his rise
A Thing To Do: uncover the ancient cult-writings from which Malsippians cribbed and learn some forgotten clerical magic

THE VOICE IN THE PIT

Early in his reign, Malsippius put his uncle Balaranthus to death for some small offense, or the seeming of a conspiracy.  Balaranthus, who was a fairly accomplished sorcerer and speaker-to-darkness, was beaten with bamboo rods until his bones were powder; his corpse was then dragged by a jackass to the edge of a crevasse, where Malsippius kicked what remained of his uncle's corpse into the pit.

With his dying breaths, Balaranthus called out to certain small things in the dark, greasy squiggling things from discarded realms; he called out in whispers, and in silent shouts, and he made promises.  Thus was Balaranthus preserved - in a way.  The wizard did not die, but was instead changed.  In the years that have passed, the thing that was once Balaranthus - a boneless, quivering flesh-mass which has taken into itself various lesser life forms which thrive in the darker rock-rifts of this world - has grown to fill the caverns adjacent to the pit.  He lies there, unmoving save for the spiderats which skitter over his skin and crawl through his folds; extra eyes and fingers, some vestigial and some not, have sprung up across the vast expanse of Balaranthus.

Much of the time, the thing in the pit sleeps.  But when Balaranthus is awake, he knows many things, and his hollow voice rings upward out of the pit...

KILLERS IN THE DEEP

What became of the Razzi family and their trusted servants when the colony at Razzioa was destroyed?  Few now living know, but the answer is obvious to those with eyes to see.

In the waters around Razzioa, and out into the tradelanes of the Sea of Woe, swim dangerous packs of creatures which the tattooed island natives call koua.  The koua appear - if one squints - as the blending of the two banner-totems of the Razzi family, the lion and dolphin.  Indeed, the koua do seem to have catlike faces ringed by manes; wide maws with row upon row of sharp teeth; and the smooth green-grey skin of some sort of dolphin.  But they are indeed more akin to sharks, both in their need to breathe water and their predatory nature.  The koua do not speak, so far as we know, but they are nearly as intelligent as men, and very cunning when it comes to the hunt.  This fearful cunning is supplemented by their ability to scent both fear and innocence in the same way a shark can smell blood in the water.