#JULYGANTIC Over Hill, Over Dale

Hill giants!  Sometimes considered less sexy than frost or fire, hill giants are no less iconic - they are the great fairy-tale giants, the immense ogres who swing tree-trunks to crush thatched huts.  Great stuff, but there aren't that many adventures out there that highlight the hill giants, and that's a shame. 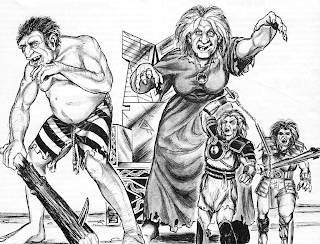 Polyhedron #21 yields this Carl Smith AD&D adventure for levels 8-12, which was an official tournament in 1983.  It's all about a tribe of hill giants, recently taken over by Mazaera the Mad (who pretends to have magic powers and has taken over the tribe via murder and deceit), which is going after the human town of Bywater.  The PCs are enlisted to procure a giant-slaying sword from a tomb and bring it back to Bywater to help fight these assaults.

The tomb, while small, is surprisingly nasty - some clay golems, a glyph, and a mummy!  The adventure provides a hexmap and some wilderness encounters - I suspect new-school design on this would've eschewed the map and just railroaded the "right" number of wilderness encounters to fill a con-slot etc.  We're also given the caves of the hill giants, of course - and in addition to the giants they feature doombats, some lizards, and tentamorts (which I'd forgotten were a thing).

I have no idea how this played out as a tournament adventure; we're not told in this for-home-play rewrite.  You could drop the situation (or adapt it) and still have a small tomb with a giantslayer sword in it, and a decent hill giant cave lair to use.

Dungeon #48 features this D&D adventure for low-level characters.  Hey look, Chris Perkins wrote this one, and on top of that (wonders never cease!) I've actually run it.  YEARS ago.

The halfling village of Wistil is famous for its apples, but the machinations of a rival apple-grower (involving a shapeshifter and a full page of exposition, because that's the era we're in) have left the orchard's trees poisoned and dying.  A party of halflings was sent (with considerable money) to go consult with the druids of the grove about what to do - but on their way back with the antidote, all the halflings (save one survivor) were bushwhacked and netted by a hill giant.  So that's the setup - confront the hill giant, rescue the halflings, grab the antidote to save the orchard.  Remember, you're levels 1-3.

The adventure provides some wilderness encounters, the hill giant's lair (luckily he's not at home when you first get there...), and the wildcard of the shapeshifting wood-drake who's sort-of responsible for all this in the first place.

Brufnu the hill giant is rather domesticated and refined for his species - thanks to his late wife's home training - and lives in a proper hill-giant-sized house rather than a filthy cave.  The PCs will have to deal with the wonders of the oversized house (which should be fun for low-levels), as well as Brufnu's ogre-sized daughters and their pet lion Kitty.  And they'd better do it quick, because before long Brufnu will return home with his new bride.

Although this adventure is unnecessarily verbose, it is a solid attempt at the kind of low-level, folklore-inspired D&D that is best embodied by Willie Walsh.  This might be a good one to adapt for kids, or to run in a con slot with pregens (halflings!) or as a DCC zero-level funnel or played for laughs. 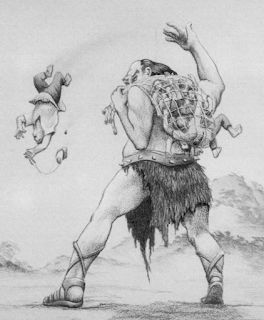