Back in the 3.x era WotC's website cranked out lots of short adventures, many of them designed to go with maps they had also shared.  Crumbling Hall of the Frost Giant Jarl is one such adventure, currently available on DriveThru.  Let's take a read through. 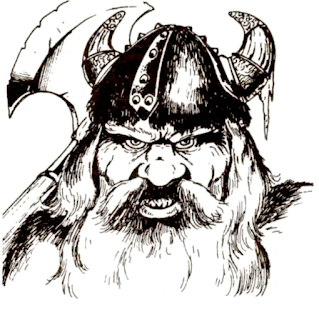 1. Self-styled Jarl Gungnir (a frost giant cleric of Thrym) and his band are using this ruin as an operating base.  Chiefly frost giants and their ogre servants.

2. Predictably there are winter wolves, a dire polar bear, and a cryohydra in here, too.  This homage is not trying to reinvent the frost giant wheel.

3. Oh, here we go - in a nod to Minos of Crete, and leaning hard into 3.x monster templating, Gungnir his hiding his bizarre son.  The product of Gungnir's youthful dalliance with a shapeshifted white dragon, the Nameless Thing is bound in a chamber and wants out so it can kill Gungnir.  Take a moment and absorb the Third Edition-ness of this phrase: a half frost giant, half white dragon, with Blackguard levels.  A clever party could exploit this (as well as Gungnir's mother's dislike of her son), so while we don't have factions in this site, there are definitely personality conflicts.  Why does the Nameless Thing have a sword in there, if it's imprisoned?

4. Note that if the PCs leave the Nameless Thing alone but kill Gungnir, the magical binding on the abomination dissolves.  Congrats, you've loosed this thing into your campaign world.

5. There's some decent treasure in this crumbling hall, and a few glyph traps that PCs might not be expecting.

Other than the inclusion of the Nameless Thing, this is a standard Frost Giant lair that could be dropped onto your map without difficulty.  If you're third-ed/d20 conversant and like converting on the fly, or running Pathfinder 1e, Crumbling Hall of the Frost Giant Jarl is an easy pickup for a buck at DTRPG.  If you're running anything older, you're better off crafting your own frost giant lair.