Giant’s Rapture is designed for 4-6 characters of 6th to 8th level, and is definitely an homage to Against the Giants.  Although there is an overall quest, the three sections of the adventure involve stone, frost, and fire giants respectively.  The author asserts that each section is designed to run in a three-hour timespan, since it was used for tournament play at GenCon 2013 - if this bears up, then they’re good for convention or public play.

Let's read through and see what we can see. 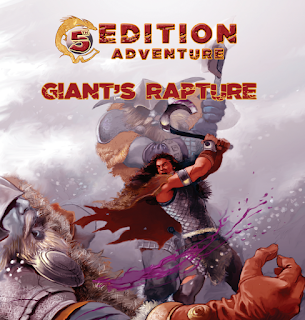 Overall?  It’s okay.  I could see yanking out the fairly-interesting stone giant encounter, or using the fire giant hall as a drop-in lair.  Giant’s Rapture is 100% an homage to Against The Giants, for good or for ill.  I can see how it was likely a fun tournament sequence at GenCon (although I note there’s nothing in here about scoring or running it as a tournament yourself).