Despite some formatting issues (still being hammered out), the current version of the Wampus Country Arcane Abecediary can be found here.  Next step is to fix the formatting issues and add all the various appendices and half-finished magic-related articles I wanted to add, then release the thing 'for real'.  Check it out and drop me a line (erikisarobot AT g mail dot KHAAAAN!) if you find typos, unwieldy grammar and explanations, etc.

What's in this bad boy?  78 new spells for Labyrinth Lord - that's A through Z three times.

Each and every spell suitably strange and full of Wampus Country.

Now to take a break and move on to something else for a bit... writing spells can be tiring.

S is for Spells: The Project and the Preview

Apologies for the dearth of posts lately - I've been toiling away (toiling, I tell you!) on spells.

For many bloggers, including a number of gaming-folk, April is a time for the A-to-Z Blogging Challenge, wherein they attempt to do a post for each letter of the alphabet throughout the month.  While I didn't sign on for that challenge, I did have an idea... why not do a new spell for each letter of the alphabet?  Rather than post one each day, the plan was to format them all together in a free-to-download pdf.  I asked some G+ pals to help by suggesting names for some of the spells (thanks Reynaldo, Ashe, Jez, and Scraps).

The whole thing - now dubbed the Arcane Abecediary - has taken on a life of its own.  What was once 26 spells has now morphed into 78 new spells.  That's right, three for each letter of the alphabet, each spell name alliterative and most of them composed of deliberately obscure words (which might tell us something about what the wizards of Wampus Country are like).  And while I'm tap-tapping away on the keyboard, a handful of artists have started throwing spot art my way for inclusion in the pdf!  I could not be more excited.

I'm hoping to have it all put together before the end of the month (fingers crossed).  The spells themselves are a mix of the interesting, adventure-useful, and just plain odd, but there's a definite Wampus flavor there: strange transformations, wilderness travel, witch-curses, that sort of thing.  I think I'm praying that of the seventy-eight spells, most folks will find a handful they'd actually like to use in a game.

Here's a preview of some of the spell names - these are all spells which did not appear on the original G+ thread.

Of the spells named above, one conjures an armadillo valet, another dissuades pickpocketing by the cunning use of flamingos, and one turns rats into beer.  That's pretty damn Wampus-y, far as I'm concerned. 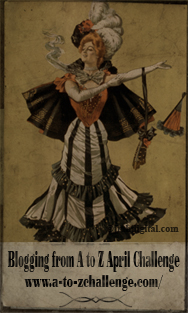 Is there anything cooler than original art meant for your own campaign?  I don't think so.

I'm high as a kite because today I received not one, but two pieces of art for Wampus Country.  The first comes to us from Melissa Richmond, who was very kindly soliciting requests for character illustrations.  I asked for a man in a three-piece suit and bowler hat, maybe he's a wizard with an unusual familiar.  And this is the result!

I think the monocle and fingerless gloves - not to mention the koala in all his glory - put this one over the top.  Fantastic stuff, Melissa, thank you!  Now everyone will want a koala familiar with a top hat.

And speaking of koalas, Doomsdave was inspired to sketch after reading the post about reskinning hybrid monsters.  He brings us this rendition of a cardinal/koala, the "koardinal-bear"! 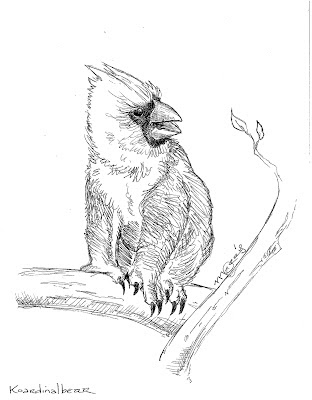 Awesome sketch, Doomsdave - I guarantee I won't be the only one using a koardinal-bear after seeing this artwork!

What is it with koalas this week, anyway?
Posted by Erik Jensen at 10:33 PM 1 comment:

Email ThisBlogThis!Share to TwitterShare to FacebookShare to Pinterest
Labels: art


No two ogres are exactly alike.  All ogres are assumed to generally be moderately fuzzy, with big eyes and mouths.

Email ThisBlogThis!Share to TwitterShare to FacebookShare to Pinterest
Labels: monsters

No Resurrection Is Perfect

Riffing from a discussion about raise dead and the like on the RPGSite, here's a table of a hundred "Resurrection Quirks" -- weird things (some bad, some good, some just strange) that might affect a character who is raised from the dead or resurrected.  How this table interacts with system shock or anything like that is up  to the DM.  Part of my continuing quest to push the creative bits of my brain by doing a d100 table at the drop of a hat, I suppose.

The layout on the pdf is pretty crap, I know; I should have formatted the thing differently in the first place, but it was either three pages like this, or seven pages all in a single column. 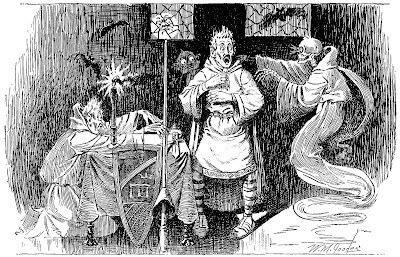