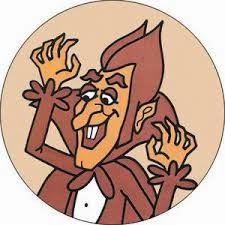 Have you ever been running way late on blogposts, and then you get a pretty dumb idea and run with it anyway?

The Haunted Mills is the skeleton (ha!) of a Halloween adventure.  Mostly it's jokes.  But at least it's out of my system now.

Presented nice and early so you can flesh it out in time for a Halloween one-shot.

Recently some PCs took a trip to the City Behind the Moon, a faerie tradestation hung amongst the stars.  During that visit, they saw all manner of shops hawking strange goods, including several which offered odd liqueurs, strong drink, or potions of the magical variety.  One shop in particular - the Apothecary Most Legendary - was essentially the multiversal faerie equivalent of an "As Seen On TV" store in the mall, and it had goods such as these on the shelves...

Takhisian No-No Juice - A foul-smelling liquid distilled from the innards of naughty and self-important dragons, Takhisian No-No Juice - known as TNJ to its fans - has three distinct effects.  1) When an entire bottle is consumed by an evil, sapient creature, TNJ acts as a healing potion, restoring 2d8+2 hit points.  With each use, there is a cumulative 1% chance of draconic mutation.   2) When TNJ is used as an oil for gears, it magically enhances the functioning of vehicles which run on tracks, such as locomotives, mine-carts, and roller-coasters, improving their speed by 20% for about an hour.  3) TNJ is a deadly poison to certain halfling subspecies.

Pocket Fish-Or-Man? - This palm-sized device is a wooden box with a spinner on top, and two icons representing a fish and a human; there is also a small square on the surface which seems to contain some kind of gauze.  When a drop of bodily fluid (blood works best, but spittle also functions) is placed on the gauze, the little brass arrow spins rapidly for a moment, then settles on either fish (source of the blood is a fish) or man (source of the blood is a mortal humanoid - anything from human to dwarf to orc, etc).  Liquid from a creature which is neither fish nor man (a chicken; a demon; a vampire) will cause the arrow to spin wildly, then point off at nothing.  Placing the blood of a mermaid or similar creature on the device will break it.

KaBlam - A small packet of crimson powder which may register as magical and/or 'good' to some highly-attuned detection techniques; the paper packet is decorated with a drawing of an exploding angel, and the salesclerk insists the powder is mostly "genuine Throne plasma harvested by the haemogoblins of Thrux".  If a packet of the powder is mixed thoroughly with a flask of common lamp oil or other mundane flammable, any explosion caused by said oil will do double damage to creatures susceptible to "holy stuff" - usually devils, demons, undead in some realms, etc.  Heavenly creatures of substantial power will be able to smell the powder from some distance, and may be less than pleased at its use.

Pajama Plate - This comfortable neck-to-toe bodysuit has the appearance (sort-of) of a full suit of plate mail, and conveys protection like studded leather, but is soft and stretchy enough to sleep in.

Jinnsu Stake Knife - This steel dagger has been specially enchanted by earth elementals such that the entirety of the blade counts as wooden for the purposes of staking vampires.

Jaxlalan's Power Juicer - A whirring, clunking machine the size of a small cart, the Power Juicer was invented by the Muscle Wizard Jaxlalan.  Magical items go in the top, and the Power Juicer breaks them down into healing potions (of the 1d8 variety).  Each "plus" of a weapon recycled, for example, will generate six draughts of healing potion.  Other miscellaneous magical items will generate 1d30 draughts, irrespective of gp or xp value of the magic item, for Jaxlalan was insane and his Juicer is fickle.

The Sluggie - A warm, hooded length of mottled green velvet, the Sluggie functions as an all-weather cloak.  When worn backwards, however, the Sluggie casts its enchantment upon the wearer, who now appears to be a man-sized garden slug.  The illusion affects all five senses, and lasts until the wearer reverses the Sluggie, or touches salt (which will disenchant the device).  Most Sluggies have cute little antennae on the hood.

Spray-On Beard -  A tin canister which allows the user to quickly generate a beard (color of hair matches color on top of can) for disguise, for fun, or for holy rites like the Feast of Saint Zizzytop.  One can is enough to generate three reasonable beards, or one Amazing Wizard Beard.  The magical liquid turns to hair upon contact with the face, but it will only do beards - no unibrows or top-of-head hair.  It does, however, function just fine on females and creatures who don't normally grow beards (such as lizard-men or stone golems), producing a luxurious man-beard with a simple press of the button.

Sheikh-Weight - The size and shape of an oversized metal coin, the Sheikh-Weight attaches itself to a target when thrown and immediately weighs a hundred pounds; however, it only functions on nobility and royalty, hence the name.  Now a curiosity, the Sheikh-Weight was a decisive invention during the Gentry-Slaughter of the city-state of Plarg, and even some current models are emblazoned with that old motto, "We are the 18/00 percent".

The UroBlade - Ever find yourself in the middle of a dungeon with no-where to relieve yourself?  Don't trust your party members or henchmen?  You could use a UroBlade.  This fully-functional longsword (okay, not really, it only does d6) has a secret - the pommel flips open so you can take care of your business inside the sword and empty it out later.  Also available in "shortsword" (for halflings) and "glaive-guisarme" (who are you trying to impress?).  A UroBlade which has been, ahem, utilized has a 25% chance each round of popping open during subsequent combat and spilling all over you and your melee opponent.

The ChopSlap - It slices!  It dices!  The revolutionary ChopSlap replaces all your melee weapons.  Basically it's a handle that can manifest a dagger, shortsword, longsword, or ten-foot-pole depending on the button pressed.  All these modes work pretty great, doing the usual (nonmagical) damage; but the ChopSlap doesn't stand up to repeated use.  After 10+1d20 rounds of actual combat with the darn thing, the buttons start to get a little wonky, and the weapon produced will be totally random each time (including weapons not listed above, like a battle-axe or main-gauche, and even some improbable implements such as a rake, trowel, gaff, or marital aid).

The Sham-WoW - A small fluffy square of fabric which, when held over the eyes, impedes most sight but places a golden aura around passersby who may be in need of help or have work you could do.