Apologies for the cheesy post title; I pretty much had to do it.

So Nevermet Press has challenged folks to come up with Krampus-related posts or other uses for their Krampus holiday artwork this year.  Having just had twenty-four hours of last-minute Santicore madness...let's go for it.

First, the art, which is from Steven Austin and used under Creative Commons: 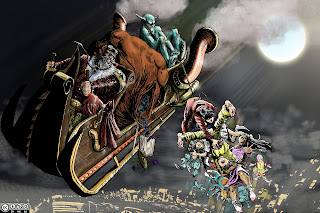 But what to do with the Krampus?  Stat him up? Already done (here and here) - granted, those are Pathfinder versions, but down-converting or coming up with stats for the Krampus for B/X or LL should not be a big deal.

Obviously, the thing to do is to adapt Herr Krampus and some other Christmastide lore for Wampus Country.

The krampus-kinder are a cultish band of several dozen dark fauns who lurk in the pine forests of the mountains, usually keeping to themselves except for once a year at the Winter Solstice, when they all journey down the slope in a massive, whooping war-party.  This excursion continues - with much singing, yelling, and the burning of torches with strangely-colored flames - until the krampus-kinder reach a settlement.  There, they set about looting, torturing, and killing all in their path.  Houses and barns are set alight, livestock are hobbled or torn to shreds, and, most disturbingly, children are kidnapped.  It's all over before dawn - the krampus-kinder return to their hidey-holes on the mountain, or else disappear in the morning mist via fell magic.

Children kidnapped by the war-party, who are usually stuffed into sacks to be carried off, are brought to the sacred wellspring high in the mountains which is the focus of krampus-kinder faith.  Buried by the spring is their progenitor and god, in whose image they themselves are shaped.  Each child in turn is submerged in the hot spring as a kind of baptism, and rises a new krampus-kinder.  This is the only means of reproduction available to the 'kinder.  The process works best on children, as the transformation sublimates their personalities entirely; but an adult who bathes in the spring will also become a krampus-kinder - physically at least, and perhaps with a minor alignment shift toward evil or chaos; the wellspring itself can only perform the transformation for twelve days following the solstice.

The remainder of the year the krampus-kinder frolic, hunt, and work in several small gemstone mines, the fruits of which they trade with certain other insidious races or with nomadic barbarians.  On occasion, a 'kinder comes down from the mountains and finds work as a mercenary or enforcer amongst gentler folk; one such is "Ruprecht the Hill-Devil", a skilled swordsman and archer who fought (for pay) at Cadaver Canyon and has occasionally appeared as part of Thunderbolt Black's Amazing Action Show.

A massive, lumpen and furry creature with flaming crimson eyes, the Badalisc, though impressive of visage, is generally considered harmless and even beneficial.  There is, we presume, only one Badalisc, and he roams seasonally the lands between Thistlemarch and Eagle Mountain, grazing on leaves and small game.  A curious creature, the Badalisc has been known to receive visions from beyond - whether these are true dreams sent by the divine or the Badalisc has eaten something improper is not known.  When he learns of this good news from on high, the Badalisc stomps into the nearest village or farm and recites an awkward rhyming poem to convey what he has learned.  The locals do not always understand the import of the Badalisc's visions, but they are grateful for the effort and traditionally feed him roasted chestnuts, honey, or barbecued rabbit.  After gulping down this meal, the Badalisc trundles back into the woods and will not be seen again for months.

A sorceror of indeterminate age and probable fairy ancestry, the dour Ded-Moroz dwells in a tower of ice in the far mountains. Also known as 'Father Frost', he is assumed to be a powerful wizard with great knowledge of the old ways.  Ded-Moroz occasionally appears in the more civilized areas of Wampus Country on one errand or another, blowing in on a cold wind and departing just as quickly and mysteriously.  Sometimes he sends one or more of his several daughters, the Snowmaidens, out as well, usually to trade or negotiate with merchants or giants.  The Snowmaidens are all incredibly beautiful and pale, and Ded-Moroz is extremely protective of their person and honor.  It is said that there was once a popular joke which referred to the Snowmaidens, but Ded-Moroz soon heard wind of it and has since cast a spell allowing him to know if the joke is ever told, so that he can appear and slay the jokester.  The joke is terribly ribald and full of nasty double-entendres; the only surviving piece, possibly the punchline, is "because Frost's daughter was a Hoar".
Posted by Erik Jensen at 3:25 PM