Warrens of the Stone Giant Thane appears in Dungeon #198 - it’s by Chris Perkins and aimed at a party of levels 14-16.  It’s Perkins’ stone giant adventure meant to be part of the 4e-version Against the Giants sequence, between Hill and Frost.  My familiarity with 4e is low, so I’ll be eyeballing all of this.  Let’s read! 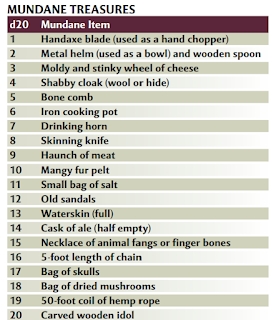 Nothing inspiring in there, nothing linking to anything else in the adventure.

Okay, filtering out the 4e-isms and my own biases on this one as much as possible, I think it’s a solid adventure.  Potentially combat-heavy, and a difficult adventure.  Your PCs might be tired of stone giants and earth creatures by the end of it.  Kudos to Perkins for tying this into both the 4e Against the Giants redux, and Temple of Elemental Evil/Forgotten Temple of Tharizdun. You could use it with 4e Revenge of the Giants as well.  I don’t know if it’s worth the work to convert Warrens of the Stone Giant Thane into 1e/OSR, but sliding it into 5e might be easier and worth it… if you’re playing out the 5e Against the Giants, or the 5e conversion of Temple of Elemental Evil; or you could use it with Storm King’s Thunder somehow, or Princes of the Apocalypse.  It’s not constantly redoing the same stuff, it’s marketing synergy!