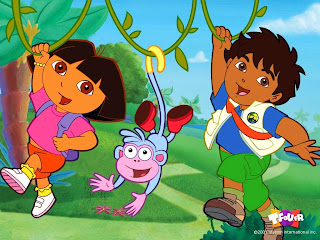 The Candy That Kills

In the Halloween spirit, some scraps about candy... 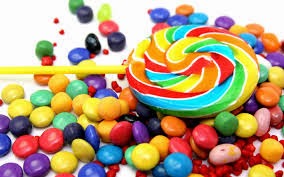 THE CANDY THAT KILLS

(The below excerpted from The Candy That Kills, a propaganda pamphlet which occasionally turns up in Wampus Country, origin unknown)

In the distant east, the punishing heat of the rising sun bakes the land dry and makes brittle the hearts of men.  There lies the harsh realm of the Witch-Queen, her bizarre sorcerous creations, and the put-upon Kandylanders.  Who is this dire harridan?  What does she want?  How can regular folks like you and I protect themselves from her depredations?

The Witch-Queen of Sugarplum Castle is a horrible faerie of some sort, immortal and dark and cruel.  Do not be fooled by tales of her beauty, for she wears an elegantly-sculpted face of fondant over her true, daemonic visage.  Her castle, constructed of confections and chocolate, perches like a buzzard on a high basalt cliff overlooking the impoverished villages of Kandyland.  The Kandylanders themselves are like unto slaves, toiling day and night in the fields and mines, digging defensive trenches for the coming war which their regent believes to be inevitable.

Once before, her armies marched out, cutting a swath of devastation seaward into the marches of Khelibesh before she was driven back, at great cost to the southlanders.  It is only a matter of time before the call to conquest sounds yet again, and the Witch-Queen unleashes her full fury on the frontier settlements of the Wampus Country!

Beware the Witch-Queen!  Her spies are everywhere!
-----

There are many dark, odd, or nearly-forgotten magical lores floating about the Wampus Country, but none of them inspire as much whispering as sucromancy, the magical manipulation of sugar.  Most wizards - and some well-traveled adventurers - have heard of sucromancy, perhaps in connection with the semi-mythical Witch-Queen of Sugarplum Castle.  Perhaps the unschooled believe the dark art to be solely involved with crafting weapons or constructs of sugar, candy, and chocolate; but, in truth, these manifestations are but the first circles of sucromancy, as practiced by the Witch-Queen's many mage-vassals and those independent wizards who stumble upon the art via experimentation.  The true secret of sucromancy is not the manipulation of sugar crystals, but of carbon itself - and through it, all life.  An initiate of sucromancy can create a peppermint sword, or sculpt a marzipan golem and bring it to life, but a true master of the art can kill with a sidelong glance.

Apprentice sucromancers - who are already wizards of note before being accepted into the order - tend to specialize in a particular manifestation of sugar: hard candy, peppermint, ice cream, bubblegum, chocolate, etc.  The type of candy is not chosen by the mage, but comes to them naturally, as a representation of their understanding of both magic and life itself.  A spiteful sucromancer may command the bitterness of dark chocolate, while a fun-loving homebody embraces the pillow-like wonder of marshmallows.

Through the centuries, the immortal Witch-Queen has groomed many sucromancers (some of whom were perhaps also lovers); she tired of many of them, tossing them aside or slaughtering them for tactical failures, personal offense, or imagined slights.  The lure of secret magic is great, and there are always more wizards looking to learn, no matter how dangerous the apprenticeship.  Notable sucromancers in years past include the wizard Rheez (chopped into pieces, parts of his corpse are said to be enchanted; survived by his own apprentice, his daughter Marie-Jeanne), and the Triumvirate of Swordsmen (all of which were slain by righteous rabbitjacks).

RUMORED CREATURES OF THE KANDYLANDS
as reported by Sweet Jimmy Peppermint

Sugarfather - A huge, gloppy caramel monstrosity which spawns a swarm of halfling-sized sugarkinder as it charges into battle.  Possibly related to some vanilla-filled caramel minotaurs spotted on the grounds of Sugarplum castle.

Balloonheads - Able to inflate their taffy-like heads and float about, these vile humanoids are known to descend on their prey from above with a fusillade of rifle-fire.

Wailing Infants - Tumbling ever-forward as a mass of screaming toddlers, this hiveminded monstrosity cries out with a hundred mewling voices as it denudes the countryside of plant and beast.

Gummy Owlbear - Perhaps too horrible to think about, this beast blends the worst parts of a ferocious predator and a gelatinous cube.