I Want My Mummy

The other day, frolicking in the pool, our six-year-old was going on and on about some kind of imaginary Egyptian adventure, with pyramids, mummies that tried to eat him, and 'ancient autographs' (I presume he meant artifacts, but what do I know).  The result, of course, is this blogpost.  First, some cannibal mummies... we tend to associate flesh-eating with zombies, and blood-drinking with vampires, but then there are those great scenes in the modern version of The Mummy where Imhotep regenerates himself by absorbing those who desecrated his resting-place.  What if more mummies could do that? 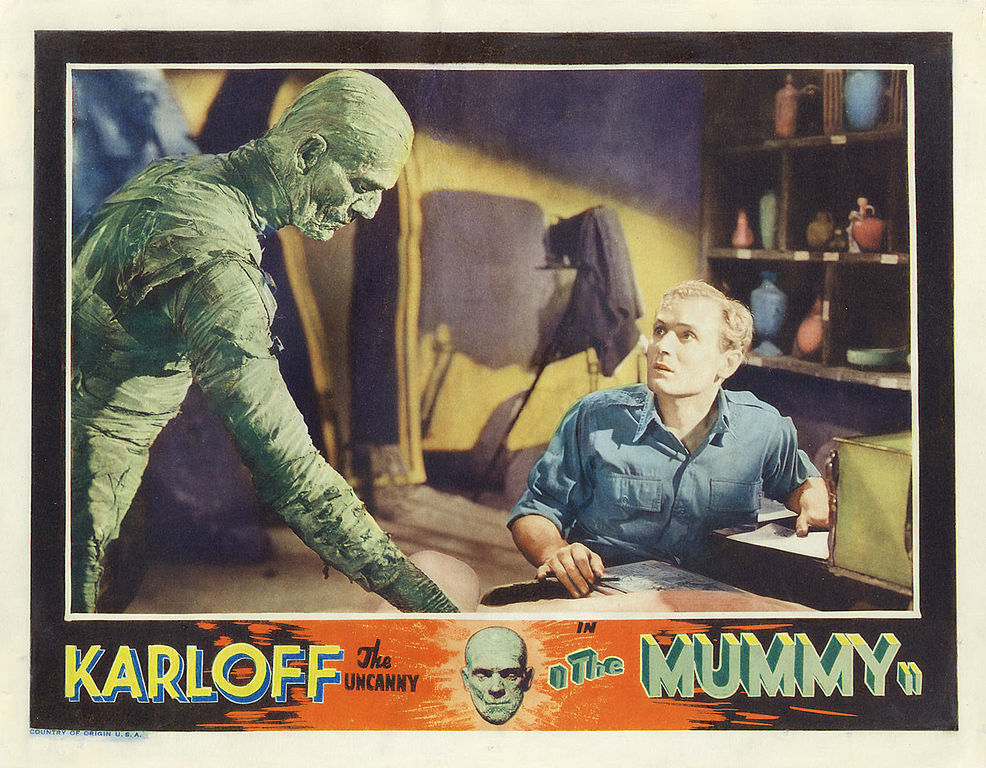 The necromantic arts of mummification may predate human civilization, but surely they were mastered by the dark sorcerers of the Painlands, in particular the kingdom scholars today know as the Eye culture.  The fabled Hul Thazzar, known to poets as the City of Stars, lies buried in the sands to this day, but its rulers, princelings, and priests wait patiently in hidden sarcophagi that dot the entire face of what is now Wampus Country.  While it is thought that the practice of mummification was first practiced on the ruling Sky Pharaohs, by the end of the Eye civilization a thousand years later, even the lowliest thunder-priest was likely to be so entombed.  It is these lesser, later mummies so often encountered by today's tomb-robbers and adventurers.

On occasion, however, an older, more powerful mummy is awakened - one who bears undiluted the blood of the Sky Pharaohs, perhaps, or dates to an earlier age.  Such a mummy wakes with insatiable hunger, and consumes the living in order to grow hearty and more powerful.  A mummy or mummy lord like this might have one or more of the following abilities.

Grave-born Hunger.  As the mummy slays and then consumes the living, it grows more powerful.  For every hit die of intelligent life it eats, the mummy gains 1d6 hit points (either healing damage, or gaining new non-temporary hit points).  If the mummy eats a spellcaster, it will "learn" 1d4 levels of spells which it can then cast (this may be four 1st-level or one 4th level, etc, depending on what the caster knew).

Solar Strength.  Mummies from a sun-worshipping culture, once awakened, may strive to reach daylight.  A sun-fueled mummy, upon bathing in real sunlight, will heal 1d8 damage per hit die and lose its vulnerability to fire until nightfall.

Storm Fury.  Mummies from a storm-worshipping culture (like those of late-period Hul Thazzar) will seek out rainstorms (a good soaking will heal 1d6 damage per hit die), and attract lightning strikes.  A storm mummy struck by lightning from any source (watch out, wizards) will convert the damage to healing and/or temporary hit points and become electrified (+1d4 electrical damage to its touch or slam attacks).

THE SHIELD OF THE SLEEPERS

These enchanted shields were once carried by the war-brothers of a life-affirming order of priests who sought to destroy undead and return whatever portion of human soul remained within those abominations back to their eternal rest.

The shield of the sleepers is in all respects a shield +1 until borne by a cleric or paladin who destroys an undead creature.  Thenceforth, two powers manifest:

The Power of Life Compels You.  The shield manifests imagery similar or compatible to the cleric's holy symbol on the face, and may serve as a holy symbol in all respects.  Further, the cleric enjoys a +2 saving throw bonus against the ancillary powers of any undead (paralyzation, charm, mummy rot) while the shield is in hand.

Ancient Autographs.  Each time the cleric, bearing the shield, destroys an undead creature, that creature's name in life appears in very small script on the inside of the shield. When the cleric has personally accrued 100 hit dice of undead destroyed (and names recorded), the shield becomes +2.  Clever clerics will have other uses for the names of the undead as well.

If the owner of the shield fails to carry it for three days, it resets to being a shield +1.