Nestled in the pages of Dragon issue #90, Aesirhamar by Roger E. Moore is an AD&D adventure for characters of 9th or higher level.

Seeking revenge on Thor for killing his brothers, the mighty giant Hargnar kidnaps the dwarf Brokkir and bullies him into agreeing to forge a weapon as mighty as Mjolnir.  Brokkir returns to Midgard and works with his brother Dwalin to forge the weapon they call Aesirhamar.  Unfortunately both brothers covet what Hargnar has promised - Thor's house as a reward once the god lays dead - and scheming begins.  Dwalin curses the weapon such that any non-dwarf who wields it will kill the first dwarf they see, and reward the second one they see.  You can guess where this is going - Brokkir, concerned about just such a betrayal, throws a curse on Aesirhamar so that the wielder will reward the first dwarf, and slay the second.   The game is afoot, and Moore gives us a suitably Wagnerian setup here.  Brokkir heads across Bifrost, and his treacherous brother Dwalin follows invisibly.

Heimdall thinks Brokkir is acting sketchy and of course he can see Dwalin...so he sends a valkyrie to Midgard to check things out, and soon learns that the dwarves have likely been forging a major weapon.  Heimdall tells the Aesir, but none of them can locate the dwarves by magic, and Odin's not around.  Wanting to stymie whatever's going on with the dwarves, but cautious about a potential god-slaying weapon being out on the streets of Gladsheim, the gods come up with the obvious ploy of getting some mortal heroes to find the dwarves...Interestingly Moore tells us the adventure is designed for three or four 9th level (or higher!) characters.  That's a small number for a classic table, but I can see why you'd want to do "trio of heroes" for something like this.

PCs are contacted by the gods, hike up Bifrost, and meet Heimdall, and get the exposition and the quest.  If they're reluctant, there's always geas.  Here's a map to Jotunheim, crossing the river at this ferry is recommended.  TIME TO QUEST!  Hopefully the PCs don't attack the two giants who run the ferry, because like many giants in Gladsheim, these guys have caster levels in addition to being whoopass Jotunheim giants.

Once across, PCs can try to track the dwarves through the desert and into the mountains.  Interestingly, the adventure spends some time talking about these locales and hiking among them, but doesn't provide a particular encounter chart.  You'll want to work that up ahead of time if you want it to be suitably Asgardian and not just your "usual" desert and mountain tables.  You'll be pleased to hear that you make it to the giant community of Smoke-Top two days after the dwarves regardless.

Brokkir has already given the hammer to Hargnar, and the dueling curses ("random curse") has taken effect.  Hargnar slew Brokkir, then wounded Dwalin.  Dwalin high-tailed it out of there and hopes to find an ally to help him escape Jotunheim.  When the PCs make it to Smoke-Top, they have a choice of passes by which to enter, each with a different encounter (a fire-wyrm, trolls, two different groups of giants).  Once you're on Smoke-Top, there are a mess of caves and settlements around - this is where we find our obligatory encounter table, featuring everything from wild ettins to frost giant kids at play. 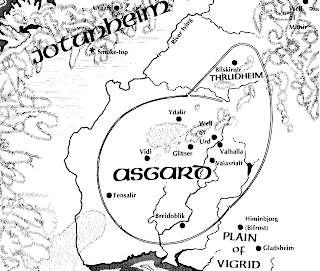 Also on that encounter table is our boy Hargnar, looking for dwarves to kill.  Hargnar is only as strong as a storm giant (!) but with the extra powers of Aesirhamar - to include spell-stealing - he's going to be quite an encounter if played right.  Fight too long or too loud and other giants will surely come to his aid.  Dwalin the dwarf lies on the encounter table, too.  But chances are you won't encounter either of them immediately, so we're supplied with details on a whole mess of giant-halls and caves and a temple to Thrym and all that sort of stuff.  There's lots to do (and slay, if you're so inclined).  Regrettably all of the giants' magic gear was Gladsheim-made and thus will lose its enchantment if brought back to Midgard.  LAME.  Obviously you can't keep Aesirhamar, you're supposed to bring it back to the Aesir and be suitably rewarded - potentially with up to two wishes per PC.  That's no joke.

Aesirhamar is an outline of a scenario, with a map and a mess of locations on it.  It's funny that it looks anemic compared to so many modern adventures (bloated or otherwise), but there really is plenty to work with here.  Everything you need to run the adventure is here, it's just lean and mean without boxed text and hand-holding.  If you have a couple Aesir-worshipping PCs in your campaign who might make it to name level, take a look at Aesirhamar as a possible vacation to Gladsheim. 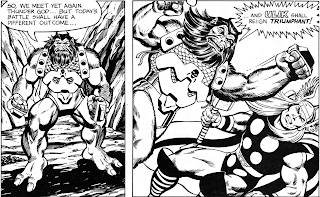 Thunder Over Jotunheim is a solo adventure for Marvel Super Heroes, in which Thor goes to Jotunheim (duh).  The book contains all the stats up front, both for your hero Thor and the baddies; then there's a guide to running MSH combats solo, with some randomization for actions NPCs will take, or spells they might cast.  The whole thing uses the MAGIC VIEWER (ie a red piece of film - you remember these from your Transformers perhaps) to reveal encounter numbers on the map, as well as text in the book.

The plot: Loki has stolen Frey's magic sword and is raising an army of giants.  Boom, time to roll.  You don't need any more exposition than that.  Stop Loki, prevent the giants from marching, bring back Frey's sword.

Thor's journey begins with a waking-dream of Karnilla, who offers you a one-use magical item, one of six, to aid you on your journey.  This is where the replay comes in, gang.  From there the encounters are out of order like a Choose Thine Own Adventure saga; you have to pointcrawl across the map and reveal which encounter to read. 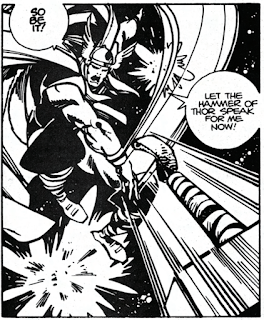 There's plenty to do on the map.  Fight trolls, giant wolves, lava-men, a stone golem.  Encounter a mysterious hag, a giant spider, a talking lizard, and the Swamp of Endless Flame!  All kinds of neat stuff, all perfectly themey.  Not a lot of actual giants, though.  Lots of choice-points for Thor throughout, complemented by a little bit of new art and some selections from Walt Simonson.

I have no idea how well this module - or any of the MAGIC VIEWER experiments from that era - sold for TSR.  But this one is a solid amusement, even if it needs more giants.  There are a couple encounters in here where you might say "oh fun, I'll absolutely steal that for D&D". 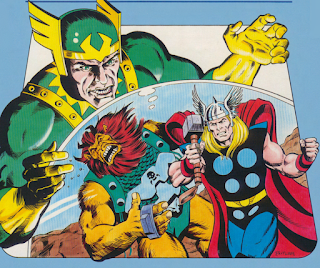