#JULYGANTIC Up in the Sky!

Cloud giants!  Storm giants!  Today we take a look at some more adventures featuring the sky giants as well as cloud islands. 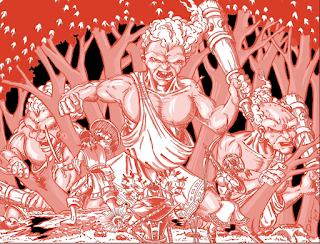 AERIE OF THE CLOUD GIANT STRATEGOS

I'm partial to cloud giants, so Joseph Browning's Aerie of the Cloud Giant Strategos was an easy pickup.  It's an OSRIC adventure for levels 9-14 - let's check it out.

Aerie is meant to follow G1-3 as an alternative path, avoiding "the Drow thing" and moving the action into cloud giant territory.  The adventure location is the immense cloud island Synnefonisi, and the castle which rests upon it.  The island is currently anchored to a volcano (just like the one in Shadow of the Storm Tyrant), but in this case the anchor is a branching beanstalk providing access to different parts of the island.  The adventure provides a rundown of how the cloud island works, and its inhabitants, at the very beginning of the book - the various cloud and fog giant commanders, the dragon, and so forth.  The Strategos has several human wizards in his employ - if this were a later edition we might've seen a cloud giant with caster abilities fulfilling this role.  As is traditional with Against the Giants homages, there are visitors/ambassadors present - in this case, a pair of noble lamia with an Egyptian theme.

The cloud island is several miles across, and half of it has been nurtured with soil and allowed to turn into grazing-land for cattle, and a verdant forest.  This provides PCs an interesting opportunity - you could hide in that forest a long time, making scouting runs and strikes at the castle.  In fact, there's been a druid living in this forest for the last six years, doing precisely that.  The druid, Bodhmal, can serve as a patron and ally for the PCs.

Castle Nephothantos, demesne of the Strategos, isn't the biggest castle map you've ever seen in D&D, but it's pretty darn big with plenty of encounter locations.  The setup is as old-school as it comes: encounters in locations, occasional NPCs with short motivational notes, but none of the "ongoing intrigue/metaplot" you'd get from a modern version.  It's not a trap-laden dungeon (although the magical pillars are pretty cool), it's a lived-in castle, so the majority of the challenges here are the inhabitants.  In addition to the myriad cloud giants, the several nasty high-level wizards, and the lamia, there are other things here and there - mihstu, elementals, etc.  Plenty of monetary treasure, some killer magical items, and even spellbooks are to be had by a thorough party.  Also of note are some original magic items that look fun.  Enchanted shuriken that turn into spiders when they hit!

If you're running the original Against the Giants with an old-school system and looking for another step on the giant ladder, this might be the one to grab.  Given the choice to call the leader a Strategos, and his lieutenant the Hypostrategos, I do wish there was more Classical stuff in there. 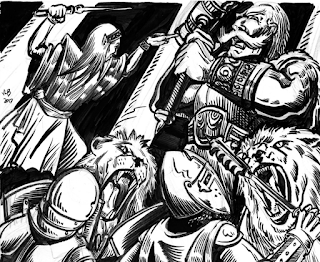 PALACE IN THE SKY

Dungeon Magazine #16 gives us Palace In The Sky for levels 7-10.  The setup here is that livestock go missing, there are giant footprints that just end...so cloud giants.  PCs will have to track and deal with these cloud giant raiders, their wizard ally, and their bugbear guards.

The raiders' cloud island is a decent size.  There's a landing dock with some flying rowboats, commanded by voice, and a bugbear guardhouse.  A cloud dragon!  More mihstu!  Definitely jam all cloud-related monsters in a cloud giant adventure!  Snark aside, I've never used or fought a mihstu, so I guess I need to rectify that.  They drain CON, so that could be pretty snazzy.  This island also has a forest on it, which the cloud giants established as a hunting preserve, so it's full of critters.  Ditto the lake.  If they can steal this island, the PCs will enjoy a very fine headquarters indeed. 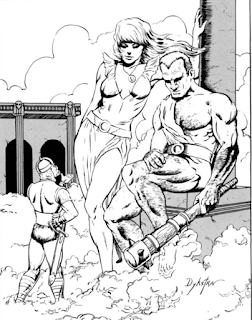 There actually aren't that many cloud giants on this island; but they all have names, and goals, and personalities, and there's some friction going on between the leader and his cousin.  The giants keep an insane monk as a jester.  Lots of nice little details here - for example, in the Game Room it notes that the cloud giants love chess and would be happy to play the PCs using this giant chess set.  There's a gnoll butler!  In the dungeons beneath the castle, there are some prisoners you can free from their two-headed troll jailer, and assorted other monsters, some of which I was surprised to see (the thessalhydra, the beholder).  The wizard Sazor Stratos maintains his own tower on the island, but there isn't much to it.

All in all, Palace In The Sky is a solid location for its era.  It hits all the "I wanna run a cloud island" marks pretty well.  I'll note that there's an 'Adventures in Filbar' module out, Lofty Pursuits, with a very similar gimmick, but I haven't read it.

Storming the Clouds is one of the scenarios in Dungeon Delve for 4th Edition.  As such, we can expect it to be heavily focused on staged combat scenarios rather than exploration.  And indeed, it's just three combat encounters strung together by an overarching goal - in this case, disrupting the ritual of some storm titans trying to return a primordial to the world.  It's an Encounter Level 27-29 thing, which is spectacularly high-end.  There are a few bullets suggesting how to expand it.  Let's see if there's anything worth stealing.

The first encounter is with some storm giants and some bluespawn defenders, which look like some kind of huge blue-dragon-derived humanoid, so we're keeping with the storm theme.  There are "ice clouds" in the area providing concealment but also causing cold damage if you start or end your turn in them.  You can really see that these 4e delves are meant as tactical exercises, and I don't say that to deride - it is what it is.  And there's opportunity here - if you're the sort of DM who maybe isn't great at always scratching that tactical itch for your players, perhaps lifting encounter setups from a 4e adventure might help out.  Read through something like this and see how painstakingly they've put concealment, verticality, choke-points, environmental hazards on the map; and see how the monsters they've chosen potentially interact to shape the battle.  This is an aspect of the game that I know I'm not great at, so sometimes I need to read this sort of encounter with my wargamer brain turned on, and be willing to learn something.

The next room, accessible via the rune-circle in the previous one, is fire-themed.  You now face a Superior Fire Titan (478 hp), some dragonborn, and a Great Conflagration, which is apparently an immense air-fire elemental.  This is pretty cool stuff, it's just so high-level that you might have to look at this entire set of encounters for ideas and then dial the thing waaaay back to suit your needs.  For example, you wouldn't want to drop this encounter in King Snurre's palace as-is!  Jets of fire spurt out of the walls, there are lava cauldrons to kick over, and a floating dais.  See what I mean about environments to play with?  The final encounter is storm-themed, and it's a colossus, two storm titans, and two storm gorgons.  Storm gorgons have lightning & thunder breath, of course.  There are lightning rods that shoot lightning at anything in range here.

I can't recommend this scenario as an adventure, it's too short and too 4e for easy conversion in either direction.  However, if you come across a copy of Dungeon Delve cheap, there's plenty in it worth looking at for ideas and general adaptation.

Dungeon #9 presents this level 8-12 adventure that involves tracking an archmage through the jungle (eventually to a cloud castle) to rescue a cloud dragon.  There's a page of backstory, but the bottom line is that you're working for cloud dragon Cirria to rescue her mate Cumulus, who's been taken by the archmage Ezoran (in a prison of Zagyg, no less).  You have a vague map from the archmage to assist you in tromping through the jungle.  There's a hexmap for the jungle, and it's populated with good tropey jungle stuff - killer piranhas, a yuan-ti temple, a cyclopskin lair.  Enough stuff here to get extra sessions out of for sure.

The cloud fortress itself, which Ezoran took from a cloud giant, is pretty standard.  Vapor rats!  Some good little details here (there's a girdle of giant strength, but it's in the form of a yellow silk sash).  The castle has a rotating-room gimmick with plenty of traps.  There's also a golem about, but the real threats are Ezoran and his partner Draxella, both of whom are formidable mages.  Ezoran is a worshiper of Fraz-Urb'luu, but you could swap in any demonic association here to tie the adventure to your campaign.

I like this one, it has some neat stuff in it and you could likely get multiple sessions out of it if you ran the overland travel portion.  If you go look at Bryce's review of this one at Ten Foot Pole, you'll note he found it 'tedious', but the one guy in the comments who actually ran the adventure had a blast with it.  Funny how that works, huh.