Although I ran the entire Parnast sequence from DDAL's Season 5, I didn't run any of the other stuff save this first adventure we'll talk about below.  The Tier Two (levels 5-10) sequence deals with Hartkiller's Horn.  The valley of Hartsvale was the scene for major conflict between giants and humans in antiquity, when the giant demigod Hartkiller rallied the human side against his kin.  These adventures all take place in that region (including the village of Stagwick and Hartkiller's old castle, Hartwick), and play off that history.  Let's take a look at these and see if they're worth running or stealing from.

The frost giant Jarl Ryndolg and his army of giants and ogres seeks the artifact Hartkiller's Horn.  Some dwarven soldiers are trapped, under siege.  Time for PCs to go rescue them!  Regrettably these adventures tend to have the same "your Patron tells you to do it" opening.  Alas, organized play!

Some time is spent discussing cold weather and travel in the Icespire mountains - the eighteen miles you have to go will not be easy given the snow and storms.  Flight is not a good option.  The adventure offers a selection of optional wilderness encounters and events.  As you get closer to the rescue site, you come across a frozen dwarf's remains.

Once you arrive, the DM must figure out how late you were in arriving and how many dwarves are already dead.  Kudos to the author for using actual passage of in-game time as the measure here rather than some artificial construct.  How shall we get past the besieging ogres to extract the dwarves, who lie at the bottom of a gorge?  The adventure offers some pretty interesting stuff at the ogre camp - ways to sneak around, things to interact with.  There's also the classic "challenge to ritual combat" option.

No matter how the PCs get down into the gorge, there's a timer here - hill giants are coming.  You're given a full roster of the dwarven soldiers, complete with names, and a table to generate personalities as needed.  The dwarves at the bottom of the gorge found a holy runestone relic thing and an open giant-sized sarcophagus - that may be important later.  I really like that the author does not prescribe a particular way of solving the issues, and addresses several more likely courses of action the PCs may take.  There will certainly be combat with ogres, giants, and winter wolves, but more interesting is trying to scale the gorge.

There is a "set-piece escape" offered in which the characters cause an avalanche and use the sarcophagus lid as a toboggan to slide down the mountain.  Certainly memorable, and it's the ending I used when running the scenario at a convention.

Blood Riders eager to whack a giant have kidnapped a young frost giant and claimed that they were attacked, breaking the uneasy peace in the region.  What a bunch of liars.  While internal factions of Blood Riders argue about whether to kill the giant, the giant's mother is searching for him and informs a frontier scout.  This is where the PCs come in - can they locate the kidnapped giant and solve this situation before it breaks into further hostitilies?

The scenario begins with frontier scout Wum Burdun introducing the Frost Giant Mom and explaining the predicament.  This would be far more effective if Wum were someone the PCs had met before, and trusted.  To get to the Blood Riders, you have two paths - fast and dangerous, or slow and less-dangerous.  At least the PCs get a choice here!  There is risk of exhaustion either way (and exhaustion is no joke in 5e).  Better to move at a heroic pace through the perils of the Icespires.  When they find the abandoned camp, they grab some clues and continue on the Riders' trail.

The trail takes you to a river befouled with pixie dust (magic ensues) that also features a random encounter and the potential discovery of the corpse of a Blood Rider, killed to maintain order.  Really the interesting bit here is the river's random effects, and the fact that the random encounter (be it treant, ettin, hag, or orc) know about the river and will take advantage of it.  The treants and hags here are interesting and have their own goals - I can't help but feel these types of encounters would have more resonance if the PCs at least knew of these named NPCs.

Eventually the PCs make it to the new Blood Rider camp, where they can assault the place, stealthily free the young giant from his cage, or try to talk the Riders into freeing him.  The negotiation is essentially a skill challenge, as-written.

Interestingly from a DDAL standpoint, there's a note in the rewards section about characters who might have a story award from a Tier One adventure in the Parnast series.  Totally possible, even likely, that a character would play through Uninvited Guests and then later, having levelled-up, play this scenario.  Nice to see that interplay, since the Tiered sequences are often treated as very separate things.

Note that the last two adventures are tagged as two hours in length!  You have to keep a serious pace moving on these if you want to hit that goal.

PCs are dispatched to meet with a stone giant, and discover the location of ancient Hotun-Shul complex, where they will learn more about rune magic and what's going on with this Jarl nonsense.

The Halls of Hotun-Shul are a small dungeon with pockets of wild magic and dead magic.  Much of the place alternates traps, magic stuff to interact with (watch out for the elementals!), and artwork that serves as an expository dump.  There's also a giant ghost you can talk to.  Very little combat during this exploratory phase, but the PCs can't leave Hotun-Shul without tangling with the Rune-Forged Guardian.  This critter is a tough fight, and sure to be a memorable set-piece if your PCs survive.

I like that this scenario has lots of options provided - alternate traps and encounters to use.  There are encounters you're supposed to substitute if certain faction members are present, as well.  This looks like a good trap-focused dungeon for dropping in. 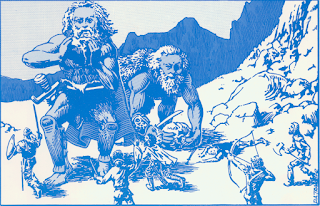 PCs are sent north to find an ancient redoubt to view the strength of the Jarl's army, but their appointed scout has been killed by ogres.  What do?  Why, work your way through several giant encounters along the way, that's what.  The encounters as offered are pretty vanilla other than one featuring a rope bridge across a chasm.

The scout's notes can be deciphered to help this whole process.  When the PCs get to the redoubt of Ise Festing, there's a fight with some ogres there, then the PCs can use the enormous ancient spyglass to look at a distant plain and see the armies gathered there.

That's it, that's the whole adventure.  You return to your Patron and report back what you saw.   I feel like any party that runs through this one without doing the next one would rightfully feel like they lacked a conclusion.

Jarl Ryndolg, claiming to possess the Hartkiller's Horn artifact, finally attacks the Hartsvale.  Giants and ogres from all over have answered the call of the Horn, gathering for war!

King Hartwick wants the PCs to go investigate a particular area of weirdness, but before they can pack up and leave, Ryndolg issues a challenge.  Three days hence, Jarl Ryndolg will do battle with the lord of the valley for ownership of the place - thus potentially foregoing the bloodshed of the valley's residents.    King Hartwick has no expectation of being able to win that fight, by the way.

The PCs head out, and along the way clash with a giant search party from whom they might learn a few things about who Ryndolg is and what he seeks.

Next the PCs find Hartkiller - who is risen from the dead and slowly regenerating.  Hartkiller is of course the true lord of the valley...but he also envisions a world in which the smallfolks serve giants, so maybe we don't want him to win this fight either.  For Hartkiller to regenerate properly, the PCs will have to hunt on his behalf - either something more mundane like a remorhaz, or perhaps the legendary Beast of Talos (a super-remorhaz).

The next chapter is the showdown, and it can go down several ways: Hartkiller can challenge the Jarl (and based on what he ate, things will be different), or Hartwick can do it, or one of the PCs can do it.  I am relieved that the PC option is in here, I really believed they were going to mandate the NPC theatre.  Once the fight starts, minions join in to attack the champion's allies.

The payoff to this adventure requires PC investment in the region and the lore.  It would be best if they've heard of the Beast of Talos before, for example.

Overall, I think the Hartvale stuff isn't as interesting as the Parnast sequence, and there's less to cannibalize.  I do believe you could take these scenarios and hammer them together into something cool for your game table, but it would require some work and a meaningful map.  Come to think of it, nothing in this sequence really relies on the 'shattering of the Ordnung' metaplot from SKT, which is a blessing.  All you need is one upstart frost giant.