If you hop over to DriveThru, there's a lot of giant-related content available.  Lists, stock art, battlemaps, and of course adventures.  I've selected a few to look at here; being a sucker for cloud giants, it's mostly cloud giant stuff.  Are all published cloud giant flying-castles basically the same?  It turns out...pretty much yes.

Raging Swan Press has a whole series of these supplements with different themes; obviously I chose the cloud giant one as a representative sample.  The intent of the product is to provide ideas and tables themed around a certain kind of lair, which you, the harried DM, then use to plus-up a published scenario or something from your own addled brain.  It's really only two pages of content, the rest is the OGL and an ad for Patreon, etc.  The lists include features outside the castle, items to spruce up rooms, appearances for some cloud giants, trinkets, and more.  I think the lists are pretty good - especially when they lean toward fairy-tale stuff.  If you're running a published adventure that already has a lot of good details and intriguing "toys to play with", these lists will be less useful to you, but if you're starting from scratch, or using something bare-bones, tossing these two pages in your DM binder might be worth it.

Bugbear games offers this cloud giant castle as part of its series of largely system neutral short adventures.  This is a quick-and-dirty sky-castle in which Baron Cirrus has abducted a princess (because that's what cloud giants do in fairy tales).  The castle's pretty generic, which is good or bad depending on what you're looking for.  The Baron employs ogres, hobgoblins, and goblins, and there's also an ettin and a mage.  The stables may contain up to ten wyverns!  The hand-drawn maps look like maps you drew yourself.  So this whole thing is very basic, but because of that could be run without having really pre-read it.  Could be good for keeping around for when 'cloud giant' turns up on the wilderness encounter table.

Castles & Crusades produced this four-page James Ward adventure!  The gimmick here is that the cloud giant is in ill health and has lost control of his cloud-island.  There are a mess of orcs, a dragon to bribe, an elf to rescue, lots of treasure (some of it cursed), and a few minor twists.  I question a few things about this adventure, such as why is there a fountain of deadly poison in the room where the giant sleeps?  Is this why he's sick?  Why didn't James Ward bother to give the giant a name?  The giant is the only one who can move the tower, via mental command, and when he kicks the (large) bucket, the tower will crash to the ground.  It's almost like the author doesn't want PCs to steal the cloud giant tower, which is LAME.  They should at least be able to try, and to make things worse!  The giant is so sickly that he's easy to coup de grace -- which means we've been given an adventure containing a dragon you don't fight, and a giant you don't fight.  Enjoy the orcs, I guess? 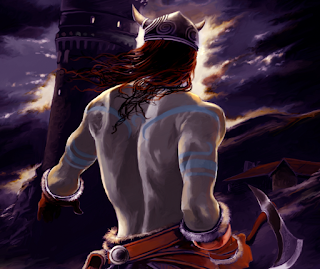 Castles & Crusades again, this time a full-length adventure for levels 3-5.  It is unrelated to Giant's Rapture.  Time to go to sea and stop the rapacious raids of the Fomorian Sea Giants!  From an island in the Otherworld, a mage called Stormgazer leads the giants and dark fey in their assaults on the mortal world as he searches for his missing children.  PCs will engage with some raiding fairy forces and then head to the Otherworld via the sea.

A Celtic-themed journey into the seas of faerie sounds GREAT, and this adventure looks pretty good, but I wish the writing were a little trimmed back.  It's a big verbose and not presented in an easy-to-run way.  There are a couple suggested island encounters for en route - you could definitely do a whole Dawn Treader or Odysseus vibe here.  Once you get to Stormgazer's isle, you can make your way through his fortification (good mix of monsters here, and some nice treasure).  The adventure assumes once you get to Stormgazer, you are assumed not to fight him (he's kick your asses, I guess), but instead to hear his motivations for the raids, and then agree to seek out his three children lost in the mortal world, and return them to him.  Fairy tale goodness!  The adventure nicely notes that disproportionate time may have passed in the mortal world, depending on how you want to run your Otherworld.

The heroes return to the world of man and head to Caerleon, home to Arthur.  Yes, that Arthur.  The three faery children are there, among other orphans, having been hidden in the mortal world by their mother for fear of their mad father Stormgazer.  There's an elf spy in the court who spirits away the kids, and at the same time the faerie forces lay siege to the place, so the PCs fight in that big battle, then head out to locate the kids' mother.

Once they have the mother in tow (there's a hag involved in that), it's back to sailing to the Otherworld to give Stormgazer the business.  Good thing it's a whole trip, because this NPC has a page of exposition to throw at you.  Fight Stormgazer and you earn the faerie mother's rewards, and of course the raids stop.   I am confused and disappointed that the magic items she gives you are bog-standard out of the DMG rather than Cool Celtic Things.

I think Giant's Wrath would make a good adventure, or adventure framework, for a Celtic-heavy game or a pseudohistorical one.  I'd probably add more "on the seas of faerie" stuff and more Arthur action, but the structure of this adventure is sound and should produce robust Celtic myth pastiche. 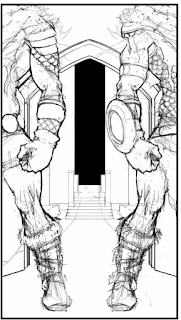