Colossus, Arise is a Dungeon Crawl Classics adventure by Harley Stroh.  It's ostensibly for Level 8 DCC characters, which might mean something like level 15ish AD&D characters or the equivalent.  It's a suitably high-level jam.  Let's read! 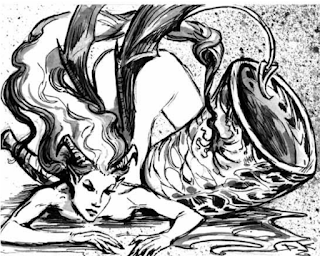 Short exposition: the temple-city of Stylos, long-buried and home to some giant post-Atlantean types called the Ur-Lireans, is back. The Ur-Lireans want to conquer, destroy, and bring about the Fourth Age of Man (pssst, that means you Third Age types need to die).  To do this, they're going to raise up an army of uplifted giant half-breeds (the Sons of the Second Age), let them purge the world so the titans can return, and in the mix is the fact that the baddies' HQ sits atop the corpse of the gigantic chaos champion Cadixtat, the eponymous Colossus, who was put down by titans in a previous age.  Got that?  Evil giant Atlanteans, half-giants, Colossus.

The adventure starts with some reasons the PCs might care about what's going on, and notes that we're presuming the Ur-Lireans have been active for a bit, so all the random wilderness encounters around Stylos will be themed to this adventure at this point.  I'll point out that all of this Ur-Lirean and Cadixtat stuff will pay off far better if you seed it in the campaign earlier - but you already know that.  Colossus, Arise isn't one of those DCC modules that lends itself to being run, trimmed and fast-paced in a con slot. 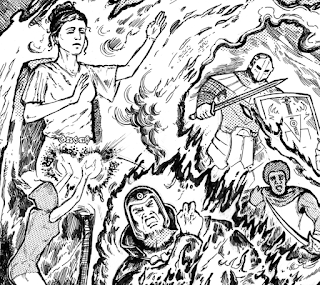 The ruins of the city of Stylos are crawling with Sons of the Second Age, but the only building really standing is the baddie HQ, the House of Cadixtat.  We're given a random table but not much more on the ruins themselves - you may want to use something here to plus-up the ruins if you think your group is going to want to really skulk about them.  But of course if they're mission-oriented, they're going to want to immediately sneak to the House of Cadixtat.  The only Sons allowed inside HQ are Master Goat and his seven animal-themed pals, but they each get a cool bestial helmet; unfortunately they're all identical dudes other than the Master.  I figure some players will expect the guy in the wolf helmet to fight differently than the guy in the hawk helmet, and so forth - might be worth jotting down some notes on ways to implement that during the fight.  The dude in the bull helmet should absolutely charge the PCs.

The encounters in the House all have "play value" in the sense that there's something special going on.  Here, the guys chained to the walls have a chance of busting out each round and changing the combat entirely; there, we have some prayer beads that grant a vision (complete with a handout).  Drink the wrong thing, fall asleep for a century.  DCC modules are often very good at giving you these toys to help create memorable moments at the table.  One of the big things here is an Ur-Lirean metal that has antimagic properties - surely your team's wizard will want to mess with that...

Level two is where things get weirder.  First of all, the veil between life and death is thin here, so there's a neat mechanic whereby the ghosts of dead PCs, henchmen, and so forth might show up to offer a warning.  Again, this module demands regular campaign play, not a one-shot.  PCs can tangle with a prophetess enshrouded in magical flames, and then there's the hel-ooze, which is the cerebral fluid of the dead-not-quite-dead colossus.  There's an ossuary with some nasty runes, and a secret door that you'll probably find (but what if you don't?). 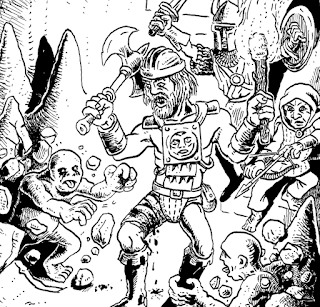 The Ur-Lireans are busting open Cadixtat's canopic jars and using his bodily fluids for foul purposes, and thankfully we have a whole sidebar on what happens if PCs drink those fluids.  And there's plenty of this hel-ooze around, including in the room where the army of Fourth Men are waiting to hatch from eggs.  Lots of weird sword-and-sorcery imagery in this one, and a lot of Law versus Chaos stuff that permeates many of the DCC modules.  The lead Ur-Lirean, the Handmaiden, is performing the ceremony that will end the Third Age, awaken Cadixtat the Colossus, and so forth - can the PCs stop her in time?   You're going to hope they can't because dealing with the Colossus is the payoff here.

The first important bit is fighting off the colossal brain and the living hel-ooze.  Once this is taken care of, the PCs might think they've won, but unfortunately there's still the body.  Undead, headless titan corpse, anyone?  Without the controlling force of his brain, the resurrected Cadixtat proceeds to attack everything in sight (well, not in sight - you know what I mean).  There's a table for it and everything!  A couple possible ways to kill this horrible thing are suggested, but PC ingenuity might find an even better way.

Colossus Arise is a good DCC adventure by several measures - it uses the themes common to that line (including Law vs Chaos, corruption, and obvious weird tale inspiration), it has "toys" throughout that encourage lethal experimentation and/or thoughtful play, and it's pretty linear.  In a sense it's a good high-level bookend to Sailors on the Starless Sea.  It would definitely be fun to run or play, but absolutely will benefit from being used as the high-level capstone to an ongoing campaign. 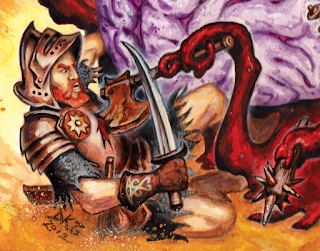