#JULYGANTIC: Curse of the Riven Sky

This Pathfinder module for 10th-level characters is by Monte Cook.  Does that mean we’ll have a convoluted backstory?  YES.  Let’s read!

And that’s that.  If you don’t mind some choo-choo, this adventure looks like possibly a fun romp against giants.  There’s a good bit of backstory, and it will come up in the adventure - or should, if you want to appreciate what’s here.  I don’t know, it seems like the armored triceratops and the possessed giant who can pull devils out of himself are the best part. This is nowhere near the best Pathfinder module I've ever read. 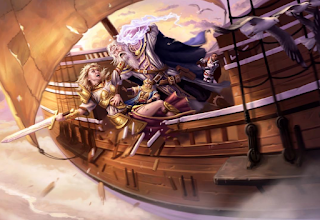