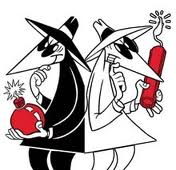 THE REQUEST:  An anti-PC/anti-party concept.  Why do these evil adventurer NPCs want to to undo or ruin everything the PCs do?  What sort of people are they?

Our answer comes from Martijn Vos - thanks, Martijn!

Of course the PCs aren't the only adventurers in the world. Other adventuring parties with their own goals, their own motivations and their own patrons may end up in conflict with our heroes. So who are these people, and why are they in our way?

Choose one or roll d20. The lower numbers are more generic and the higher numbers more specific and detailed, so you could also roll d12 or d8+12 depending on your needs.


1: Friendly rivals -- The anti-party has the same goal as our heroes. They want the same treasure, the same McGuffin, reach the same place, talk to the same people; and they don't want to share. They're not particularly hostile, they just want to get there first. They might try to misdirect the heroes, but they won't be the first to attack. They just hope to be smarter, better and faster.

2: Nasty rivals -- The anti-party has the same goal as our heroes. They want the same treasure, the same McGuffin, reach the same place, talk to the same people; and they don't want to share. They want to get there first, and they don't like having competition. If they're ahead, they might set traps or ambushes. If they're behind, they'll follow the heroes' trail and do everything they can to catch up, including ambushing them when the heroes return from achieving some (sub)goal.

3: Rivals for the same boss -- As 1 or 2, but they've been hired by the same patron as the PCs. He may be hedging his bets or doing this for entertainment. In any case, the rivals never intended to be rivals, but now they're after the same thing. Fight? Cooperate? Or team up to pay the doublecrossing patron a visit?

4: Secret rivals -- The anti-party has the same goal as our heroes, but they're a lot more devious about it, and the heroes aren't aware of them being rivals. They'll try to befriend the PCs or act as temporary allies, but inevitably, the betrayal will come. If the losing side survives, you can bet they'll be out for revenge.

5: Unwitting rivals -- The anti-party has the same goal as our heroes, but both parties are unaware of this. They just keep running into each other in various places, and neither wants to explain why they're there. If the anti-party figures this out first, they might turn into Secret Rivals (4).

6: Defenders -- The anti-party has something the heroes need or want. They have the McGuffin, the key to the next adventure, or vital information, and while they're not using it themselves, they don't want to share it either.

7: Hired defenders -- The anti-party has been hired to defend a place against intruders, and the heroes insist on going there. Sure, you could use monsters or undead for this job, but sometimes a party of highly trained adventurers will do the job better.

8: Thieves -- The heroes have something the anti-party wants. They'll first try to figure out if it's really our heroes that have the thing they want, and then they'll try to steal it. If successful, and the heroes want it back, they'll turn into Defenders (6).

9: Robbers -- The heroes have something the anti-party wants. Lacking the subtlety to steal it, the anti-party will try to rob them, ambush them, harass them, until they get what they want, and until they do, they'll keep coming back.

10: Challengers -- The heroes are top-dog (or perceived as such), and the anti-party wants to boost their reputation by defeating the heroes. Preferably in a fair fight.

11: Nasty Challengers -- The heroes are top-dog (or perceived as such), and the anti-party wants to boost their reputation by defeating the heroes. But they're not sure they'll actually win in a fair fight, and don't want to take that risk, so they'll try every trick in the book to gain an advantage.

12: Revenge -- The heroes wronged the anti-party somehow (possibly as the result of any of the other results of this table), and now they're out for blood, or at least a very sincere apology.

13: Thugs -- The anti-party has been hired to harass and intimidate the heroes in order to scare them away from their quest. The BBEG (or a lieutenant) behind this quest is aware of them, and doesn't want them interfering with his plans, so he hopes to scare them off early, and take them out if they don't back off.

14: Mistaken Thugs -- The anti-party has been hired (or has taken it upon themselves) to harass and intimidate the heroes in order to scare them away from what they appear to be doing. Someone unrelated to the heroes' actual quest mistakenly thinks they're about to interfere with their plans (which might be nefarious or benevolent). Of course their attempts to stop the heroes may eventually lead to the discovery of those plans.

16: Avenging Monsters -- The anti-party are relatives of creates that the heroes assumed were okay to kill. Turns out even goblins, kobolds and gnolls have relatives who love them, and who will avenge their deaths. They might even be reasonable enough to accept repayment for their loss, or to bring them to trial. Or maybe they just want them death. But they certainly won't sit there waiting while the heroes wreak genocide on their species.

17: Pure coincidence -- The anti-party is not remotely interested in the heroes or what they're after. They have their own goals which are completely unrelated. It's pure coincidence that makes them constantly cross paths at inopportune moments. They were expecting to fight someone else, and so were the heroes, and yet here they both are.

18: Saving the World -- The anti-party is trying to save the world from terrible disaster. A child has been prophesied to doom the world, or it has been discovered that the child is developing weird powers that will ultimately allow it to threaten the fabric of reality. The child has to be captured or killed. The anti-party will explain this to the heroes, but they're not very patient; they've got a world to save! If the heroes try to rescue the child, then they are also indirectly a threat to the world, and will be dealt with appropriately.

19: Destroying the World -- The anti-party is hatching an evil plot to take over or destroy the world. A child has been prophesied to play a vital role in this, or the child has unique powers, and the anti-party has to capture it in order to bring their evil plans to fruition. They will tell the heroes they're doing this to save the world (see 18: Saving the World), and that they will have to kill the child if the heroes interfere, but they will go to extreme lengths to prevent the child's death.

20: Keeping tabs -- The anti-party are just keeping tabs on a child that has developed unique powers. Possibly a powerful dragon or similar powerful entity has hired the anti-party to do this. The child is not to be harmed, but keeping it safe might require abduction. The anti-party won't explain why they need the child, and would prefer to keep everything secret. They might agree to have the child raised in a suitably safe environment. Or they might decide the heroes know too much. If any party messes up, terrible retribution looms.