And now, a fine example of how a Santicore request can take on a life of its own.

THE REQUEST:   A page of troll jokes, either as told by trolls or featuring the abuse of trolls, illustrated or written.  If a page is too much, maybe fill them out with orc, elf, halfling jokes as well.

Jason Kielbasa and Janis Lilly of The Only Successful One have responded to this request with a handful of jokes...and an entire adventure location complete with NPCs.


The Dinner Theater
by Jason Kielbasa and Janis Lilly


Drinks at the bar are bog standard for your setting. Although, Gargle-guh is known to make fine Manhattans, 7 and 7s, and high balls.


Denizens of the Theater

Bee -- Ticket-vendor
0-level hobgoblin
Bee is a female Hobogoblin with pink beehive hairdo who obsessively chain-smokes. She speaks to no one if it does not involve their ticket or anything theater-related and even then, does so with disdain. Will be staring at a tiny magical box w/ pictures on it she has sitting in her lap.

The Servers
The waitstaff is a family of acrobatic Russian imps who were abandoned at the theater when their manager had a heart attack. Only 3 feet tall with skin brown and creased like an old leather satchel. They balance the tarnished silver trays over their heads. They serve your food with a professional flourish before disappearing down the dumb waiter-shaft.

A rundown 2 story theater with a broken and chipped marquee out front. There is a ticket window which is staffed by a small froglike creature (Bee, above).
Lobby- Long mahogany bar in front with brass railings. Alcohol available. Sign over bar reads “The more you drink the prettier we get.” The owner is regularly seen holding court here. To the left and right of the bar are archways leading to the theater. Dinner menus are prominently displayed on the bar.
Theater- Entering you see a proscenium style stage with decrepit red velvet main rag and matching legs. Backdrop is a faded and peeling battle scene. In front of the stage an orchestra pit that once held a house band, but is now stacked with piles of rubble and theatrical ephemera.  On the walls there is peeling red and gold-flocked wallpaper and gaudy gold sconces w/ flickering illusory light.  Above you are balconies holding stage lights, ladders, and rolls of backdrop oil cloth left over from the theater's heyday. Directly above the stage is a giant ornate wrought iron chandelier that once held 50 nubile Elven dancers in tableau but now lurks menacingly above the performers like a guillotine blade. All of the seats have been removed and replaced with four-top café tables and chairs. Everything is covered with a fine powder of dust and regret.
Through the stage left leg you can see a dressing room door and beyond, a wall of mirrors rimmed with globed lights. The mirror is covered with lips stick prints and smudges. On the wall above the lights you can see a torn and faded poster for the twin elven sister act “The Splendid Serowyn Sisters and their Seductive Saber Dance of Death".
The bathrooms have been given over to decay. The once-elegant marble sinks are now weathered and beaten. The water has a 1 in 6 chance of running and a 2 in 6 chance of clogging when it does. It smells of rotten eggs. The toilets have a 3 in 6 chance of flushing; the management tries to keep them up as best as they can, not that you’d notice. Toiletries are kept up to snuff. 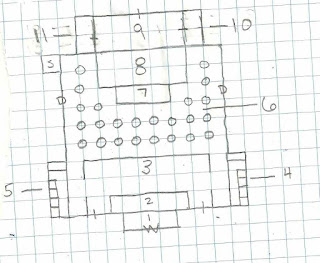 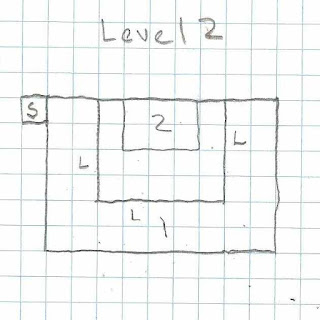 And Now, Some Troll Jokes

I encourage readers to add even more awful Troll jokes in the comments below.
Posted by Erik Jensen at 12:01 AM