Throughout their careers, adventurers wield and encounter lots of strange and powerful enchanted items.  Below, Tom Hudson reminds us that not all magical items need be the stuff of legend. 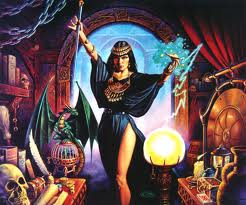 THE REQUEST: A list of magical items that seem useless but aren't (or have very situational uses).


Sandstone Bactrian: the possessor of this friable statuette of a camel will not be attacked by wild camels, and can spit prodigiously twice per day. The figurine itself - being made of sandstone - will degrade over time with rough handling.

Withered Branch: this gnarled wand, covered with near-dead lichen, will infallibly lead the wielder to the nearest source of nonpotable, contaminated, or poisoned water.

Speckled Cloak: once an unjeweled broach is used to close this cloak, the wearer will have +4/+20% to conceal their movement through sandstorms. They also leave a thin trail of sand which makes them easy to track over wood or stone floors and similar surfaces.

Cross-Staff of Inestimable Brilliance: a hardwood navigator’s tool with thin inlaid gold bands near the ends of each arm, the subtle enchantments on this item give a navigator who can see the sun certain knowledge of their location but leave them blind for 2-5 hours. With multiple uses in the same day, save vs. permanent blindness.

Carnelian Whistle: if this loud whistle is sounded between dusk and midnight, 40-240 crickets will show up before dawn.

Shangarf Powder: anyone who eats this cinnamon-scented powder risks having their internal organs turned to stone, but scattering a handful of it over sand will create a medium-sized patch of quicksand in 1-4 minutes.

Tariq’s Staff: this flimsy, ivory-tipped 8’ wooden pole will dry any fabric hung from it in seconds.

Thresher: this oversized magical flail does double damage to plants but half damage to all other targets.

Homeknife: the foot-long serrated blade of this knife never dulls; when used while cooking food, it increases the number of servings produced by 10%. Any missed attack against a target who is fighting back requires a save or the wielder nicks themselves for 1-3 hp of damage.

Ebony Whisk: most flying insects will not willingly approach within 10’ of the wielder of this item’s densely-engraved black handle or two-foot-long bundle of white horsehair. Its powers are only active while it is held.

Mottled Wafer: whomsoever eats this red- and green-marbled biscuit fails all saves vs disease for the next week.

Portal Charm: when nailed to a door or a doorframe, the door is mundanely unopenable so long as somebody is touching the charm and reciting an appropriate passage of scripture or myth. Magic will open the door, but also cause a backlash harming both the charm’s invoker and the opener.


Whitespike: so long as this unique scrimshaw dagger is driven into the ground, snowfall within 120 yards increases significantly (at least double, often more)

Noor’s Doomcaller: while this huge horn of an unknown beast is blown into, the user finds themselves unable to move their legs; if there is any overhanging or unstable mass of snow nearby that could avalanche towards the horn, it will, and in such case the user must save to be able to stop blowing before the slide settles.

Frost Queen’s Ornament: this shimmering opal-carved locket, meant to be braided into a fall of hair, causes the wearer to suffer double any effects from cold environments. Staring into the opal hints at snowglobe-like visions of faerie.

Surefoot Boon: a simple wooden prod, warm to the touch; if used by the rider of a yak or other shaggy mount to guide their beast, the beast slows down 15%, but becomes stolid (+2 morale) and steady (+4 appropriate saves).

Arvicoline Belt: made of pleasingly supple, tawny fur, this belt has a less than pleasing influence on their wearer: every dawn, he must save or feel compelled find a high place to throw himself from or a wide body of water to swim across, as appropriate to the local terrain. The wearer does gain a +2 reaction adjustment from rodents.

Irthuq’s Pick: this small, one-handed climbing pick has a wooden handle and a blade made of blue-green ice; if taken into warm climes, the blade will melt and the enchantment dissipate. As long as it stays in the high mountains, it isn’t much good at digging into rocks or ice, but it easily finds purchase in ethereal surfaces.

Essence of the Final Season: three drops of this potion cause any evergreen tree to drop all its needles; six to drop its branches and stand as a bare trunk; nine to slough off its bark in a single joined sheet; twelve to explode in a fatal storm of splinters.

The Last Blue Ribbon: throwing one end of this 30’ thin silk ribbon across a snow crevasse will cause an ice bridge to form - obviously too thin to bear human weight.


Somnambulist’s Ease: the wearer of this heavy wrought armband of a curious silver metal takes -4 to all saves against sleep and similar enchantments, but is completely protected from nightmares.

Polyniscent Stool: a folding wooden camp stool with silver inlay in the seat. Touching the inlay produces a mildly disturbing shock. A spellcaster who meditates or studies while sitting on it only gets half benefit (8 hours of time pass to learn 4 hours of spells), but cannot be surprised by visible, audible creatures.
Posted by Erik Jensen at 2:12 PM