Sometimes a Secret Santicore request is deliciously vague - something that could potentially be satisfied by a map, a random table, some adventure hooks, who knows?  Today's offering is one such kernel.

THE REQUEST:  A series of moonlight pathways throughout the multiverse.

Florian Hubner answers the call with these tables and seeds for several different cross-dimensional pathways. 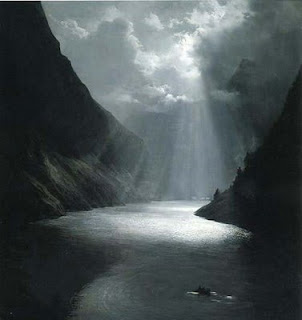 The Way Over The City of Dreams

Walking on top of the clouds above the city of dreams, every cloud a different dream. The peaks of the houses poke trough the clouds and weird little fish swim trough them, brushing past the legs of those that walk above.

Random encounters
-1: Floating dream matter dissolving everything in its path
-2: The red warlord of the kingdom of Aum
-3: The child witch Yrsa with her murder of raven
-4: The dream-stealer, a huge purple spider
-5: A swarm of rats, agitated by the Piper
-6: Snagbar the goblin alchemist with his floating gondola of wonders.

Random Dream
-1: Help the dark emperor to raze the white Kings citadel.
-2: Search for the lost child in the witch wood
-3: Climbing the endless tower, using long hooked staves
-4: Race on top of big wild boars through the mushroom forest
-5: Repairing the rampaging clockwork tower of the dwarven Machinist
-6: Escape the Fire Giant prison that was built in the crater of an active volcano


Random event
- 1: The awakening: The cloud starts to fall apart as piece by piece it gets replaced with the reality of the dreamer.
-2: The nightmare, an enormous black horse with burning hooves races over the heads of the dreamwalkers. In its wake, creatures sprung from horrible dreams.
-3: A building or part of a building springs to life and attacks the dreamwalkers
-4: a cold whispering mist creeps out of the ground, trying to eradicate every source of heat.
-5: Two dreams collide and merge, roll again on the random dream table.
-6: Dream shuffle: The roles of the dreamwalkers in the current dream get shuffled around or reversed.

Hundreds of little shrines, sepulchers and imposing temples seam the way up this treacherous mountain, the way going around, under and sometimes even over some of the buildings. Gods new and long forgotten are worshiped here but there are also countless temples that have fallen into disrepair, posing quite a hazard for pilgrims and other visitors.

Random encounters:
-1: Wind wraith
-2: The crazed monk
-3: animated pages of a holy book
-4: The false Avatar
-5: A group of frightened pilgrims
-6: The stone guardian, covered with moss and lichens

Random Events:
-1: An inscribed golden gong of unusual size comes crashing down the mountain.
-2: A rickety bridge between two temples collapses
- 3:The wind rotates ancient prayer wheels and the ancient prayers:
- curse the ones who dared to defile the temple with a withering curse
- bless the visiting pilgrims, granting them a longer life by
making them younger
- make the wheels rotate faster and faster till they break apart
into hundreds of whirling pieces.
- have no noticeable effects but disorient the travelers, making them to go back to the previous temple.
- make the trees and other plant life grow with an unbelievable
speed before granting them a will of their own for a short while.
- Try to put the trespassers into a century-long sleep.
-4: The long dead priests of the temple rise again to continue to serve their deity
-5: The current temple seals itself, forcing the trespassers to find a way out
-6: An ongoing schism is about to turn violent. two factions in the temple are ready to fight for the true beliefs


Through The Ships' Graveyard in the Sargasso Sea

Within the bowels of a deep sea canyon lies the ship graveyard of the Sargasso Sea. Blue moonlight filters trough the water above where a strong current makes travel impossible.
Random encounter:
-1: The one eyed barracuda
-2: a huddle of small skeletal Hammerhead Sharks
-3: A huge but slow Anglerfish
-4: Ghost of a drowned pirate still seeking treasure
-5: The Sea Dragon on his way back from plundering the galleon of the king.
-6: A group of merman and mermaids

Random places
-1: The carrion fields: an open space between the ships where the current collected floating corpses.
-2: A gigantic sunken Man-o-War from the Kingdom of Latem
-3: A coral reef full of sentient plants
-4: The sunken remains of a pirate fleet
-5: An old underwater ziggurat
-6: The lair of the water spider queen


Random events
-1: A freshly sunken ship comes down, some of the crew still alive
-2: An earthquake shakes the canyon, huge cracks appear on the ground letting out gas and scalding go water while large chunks of rock fall down from above
-3: The massive swarm. Countless little silvery fishes swim trough, obscuring the vision of all divers. From what are they trying to escape and what are the darker shadow that hide within it?
-4: The Kraken floats over the canyon, making all sea life hide as quick as possible.
-5: Dark clouds obscure the little bit of moonlight that was filtering trough, plunging the canyon into the blackest pitch.
-6: A strong current catches the swimmers at a bad moment.

I could totally see replacing bog-standard planar travel (portals, "poof") with something that required a short journey like one of these.  "I can get us to the Abyss, but...the path I know takes us through a pretty strange place..."  -E
Posted by Erik Jensen at 12:46 PM