Schism is the normal state of organized play groups.  Whether it's a national-level D&D thing, or a Vampire LARP, or something else, eventually it's going to fork. There will be a rules change, or a change in leadership, or in population, and a group will break off and do their own thing (often while continuing to do the old thing as well).

A couple years back some changes in D&D Adventurers League were controversial enough that we saw some attempts at splinter groups.  One such was led by a guy I knew from work (and a couple other dudes), so I was invited, and I showed up to check it out.

The concept was that they wanted to do mostly-DDAL, but rolled back to the last iteration of the org-play rules (with a couple other small changes).  Ostensibly they wanted more DM freedom, and better-interlinked stories.  All laudable goals.

The issue was, they didn't know how to get there (in my opinion).  I asked lots of questions and didn't get answers to many things - the airplane was being built in flight.  How much vetting does a DM or an adventure need before being run?  If this is Forgotten Realms, what year is it supposed to be (players will care), and how tight is our canonicity?  How do we deconflict DM usage of published material?  Are we soliciting only pick-up groupings of PCs, or can stable tables evolve naturally?  Some conflicting answers on these throughout.

There was a Discord server as the hub of recruitment and play - this was really my first in-depth use of Discord for this sort of thing.  I still think it has both advantages and disadvantages years later!  Immediately it was apparent we had a lot more players than DMs.  A lot more.  As in, this is going to be a problem.  For the couple months I was involved, I only saw two other people running games at all (and no, this did not include the couple people in charge of the whole show).

The first thing I ran was Ruined Tower of Zenopus, which I was eager to try in play after falling in love with it.  It plays as well as it reads, has great old-school feel despite being for 5e, and I continue to recommend it.  I had plopped the ruined tower down somewhere down the road from Waterdeep, near Illefarn, where I was planning to stake my claim to run the area.  Two session of Zenopus in, the PCs in question hadn't gotten very far and weren't enjoying themselves as much as I would've liked.  They were pretty passive and wanted a "mission" to go on, and they wanted things to be wrapped up by the end of the session.  This was going to be a continuing playculture problem with this splinter org - the DDAL model was strong in their minds, and most of them had never played anything besides 5e.  They had certain  playstayle assumptions baked-in.  I kept trying to be the guy running classic-leaning content...

Next I ran several sessions adapting material from Under Illefarn - updating the NPC lore in case anybody was enough of a Faerun-head to care about the time discrepancy, etc. These sessions went a little better, as they were more self-contained and mission-y, but nobody bit on exploring the larger dungeon despite pointers and hooks aplenty.  The idea of spending several sessions (and sorties) into the same dungeon didn't fly with this crowd.

At this point I knew for sure I was in the wrong place.  The organization wasn't very organized, and despite dozens of game-hungry players none of them seemed to want what I was selling.  I had a talk with a couple of the organizers about my observations, made some suggestions, and we parted ways.

I presume the experiment failed and the splinter group faded away.  Sometimes that's what happens.  Enthusiasm and good intentions don't keep an org-play program running. 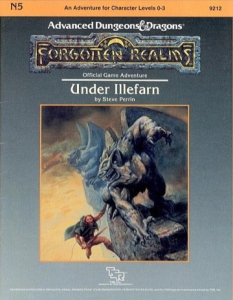