I don't claim to be much of a cartographer.  When I need a map for a Wampus Country session, I usually just draw it.  Yes, there are plenty of resources out there for dungeon and cave maps and things like that, but far fewer for buildings.

Here's a map of South Street in Thistlemarch, which was used for a holiday-themed adventure. 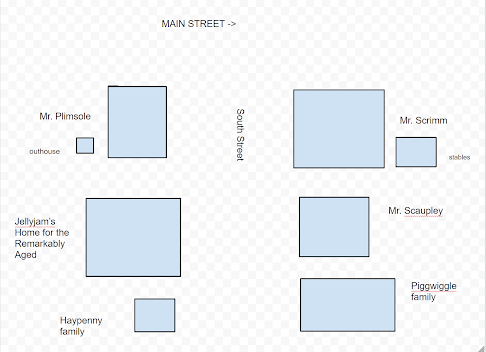 Very basic, but in this case what I cared about was the relationship between the homes, as I knew the PCs would be interviewing residents and there was a likelihood of a chase.  The Piggwiggles are a terribly fat, upper-middle class family; their across-the-street neighbors the Haypennys are slight and impoverished.  Further up the street lives dashing duck bachelor Drake Scaupley (yes, he's a duck, and he's still searching for the Legendary Duck Tower, as no PCs have taken him up on the quest).

Mrs. Jellyjam's Home For the Remarkably Aged was the most detailed location for the adventure, not counting Mr. Scrimm's kitchen help who was eaten by a Christmas Pudding.  The old folks' home contains a number of potential PC resources in the form of elderlies with lore, people who could perhaps train you, and even one sweet lady who counts as a sage for certain subjects.  There's also a gentleman who lives on the third floor who is probably a death knight but nobody's rude enough to say anything about his skeletal pallor.  The proprietress Mrs. Jellyjam herself is, as the name might imply, a woman of ample rump.

This next map from the archives is from a sequence of sessions in which the PCs were dealing with the Rat Emperor and the Cult of the Black Rat. The School for Wayward Girls, in River-Town, was the perfect place to hatch the cult's evil plan, which involved cursing these poor young women to become pregnant with were-rats.  Gross.  Anyway, the PCs foiled the experiment before it bore fruit (or rats).  The NPC notes on the map are the entirety of the personality sketches of those NPCs, presented here on the map so the PCs could keep them straight.  The only thing not on there is which of the wayward girls was secretly sort-of-in-league with the Cult (and I don't remember now which one it was).  You will be pleased of course to hear that the PC wizards noted that Abigail, upon graduation, would be strong apprentice material.

You don't need a fancy map most of the time.  You need a map that does what you need it to do.