Not long ago I participated in a "game jam" focused on OSR stuff.   I like community stuff when I have the time to participate, I sometimes like writing under time (or subject matter) pressure, and I figured why not - so I went for it.

My contribution was Vague Elephant Project, which has some elephant-themed monsters and spells of a Wampus mien.  It's free on itch.io, or you can find it on DriveThru in a pay-what-you-want status.  I must credit the game jam with shoving me out of a writing lull.  I don't know that I'd hurry to do it again, though - I didn't see authors talking to each other about submissions, cross-pollenating etc, and I wish it resulted in more downloads and comments than it did.

The submissions for the jam were a mixed bunch - as is rather the point, I think, to encourage people to contribute and create in ways they previously hadn't.  Of the submissions, I want to call out The Queen of Decay and Walkers & War-Wagons.

The Queen of Decay by Brian Rideout is a very nice adventure which you could drop into any swamp region in your home campaign.  Brian does a fine job of giving us an ongoing situation (Oneera the dream priestess kidnapped by Volara the witch) and plopping it amidst some good swamp hexes that are worth plopping on your map.

Every NPC has motivations and likes/dislikes.  Much of the stuff here is linked to lore from the World of Weirth campaign setting, but explained quickly in sidebars (I don't have the cult of Yig-Noss in my world, but I can see it's an evil snake cult, and I certainly have one of those).  While the default tone is sword-and-sorcery, you could squint and read it all as fairy tale as well.

Walkers & War-Wagons by Mr. Triceratops is a brave attempt at vehicle rules for OSR systems, in particular post-apoc/sci-fi vehicles (cars, mechs, aircraft) for the in-progress Red Ares game.  I have no idea if the rules work well in play, but it's an admirable attempt - perhaps more influenced by non-old-D&D than I would like, but that's me.  Triceratops uses damage reduction for vehicular armor, for example.  Also STRICT SPEED RECORDS MUST BE KEPT.  I want to hear more about how this works in play, bolted on to some other system.

Head over to that game jam page and download whatever looks interesting - that's the point. 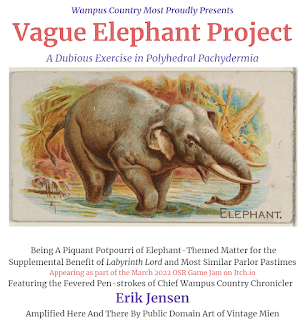