East of Thistlemarch lie the lonely stones and broken walls of a small city which once represented the edge of the frontier: the ruined city of Crumbledown.  Two generations back, during the beginning of Grandpa's War, the allied forces of Law built a small castle upon a defensible motte, and soon a large camp city sprung up in the surrounding fields.  In another world, perhaps that city could have become something permanent, a shining beacon of civilization - but it was not to be.

Several months after the castle was first constructed, earth tremors destroyed fully half of the walls and buildings.  Although these areas were rebuilt - in some cases, larger than before - parts of the city collapsed again that winter when the seismic activity returned.  Again, the defenses were rebuilt, bigger and more complex than ever, in expectation of a siege by the forces of the Great Desert Lich.  However, that siege came in the form of flaming bombards and hideous flying creatures rather than ground troops, and Crumbledown once again earned its nickname. 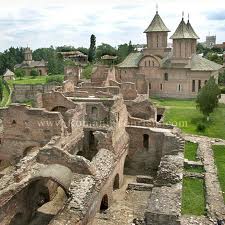 Today, Crumbledown is considered cursed and haunted; the ruins of the old castle sit atop the hill, with a series of concentric walls spiralling outward from the base of the hill.  Many city buildings, stone and wooden both, remain in various states of destruction and disrepair, overgrown by two generations' neglect. 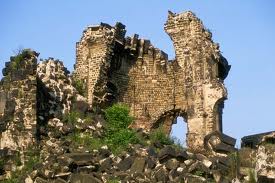 * The castle was originally called Brambledown, as evinced by the vast growth of thorny plants in the valley east of the city.  Only after disaster struck did wags begin to call the construction "Crumbledown".

* The hill upon which Crumbledown castle sits is not a natural hill, nor was it built up by the architects; it is some kind of burial mound or nest, under which sleeps something massive whose occasional stirrings sundered the city.

* Many residents dropped everything and fled during the siege, never returning.  Who knows what riches and rarities remain within the ruins?

* Within the courtyard of Crumbledown castle, a union of allied priests had constructed an impressive cathedral, in praise of the various gods of Law.  Although the cathedral itself was all but leveled during the siege, the blessed altar and any number of holy items may still lie among the scattered stones.

* Much of the ruins are overrun by hideous giant insects, including acid-squirting beetles, massive spiders, and several nests of rapacious skullwasps.

* The southern approach to the hill of Crumbledown is claimed by a coven of devil-fairies who leap upon passersby with cannibalistic intent.  Devil-fairies are wicked fey who long ago traded their essence to demonic creatures of the Midnight Sea in exchange for magical prowess; as such, they combine the mischievous nature of faeries with the simmering evil of nightmarish devilry.

* Even the fields around Crumbledown are unsafe, prowled as they are by at least one pack of where-wolves.