Hokum: A Game For Gentleman Bastards

Although a number of card games are popular in Wampus Country, by far the most iconic of local games is Hokum.  Utilizing multiple decks of standard cards and a set of domino-like tiles, Hokum is easy to play but very difficult to master.  Bluffing, betting, bursts of aggression alternating with defensive play, trading of cards and tiles with other players, and eventual backstabbing all contribute to the strategic depth of the game. 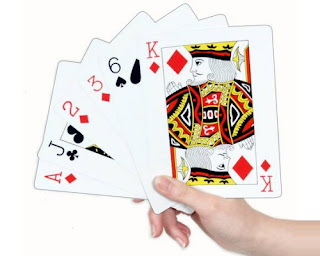 "Naw, I don't play Hokum anymore.  If I want to get screwed over, I can do that in real life."

In the classic version of Hokum, five players (no more, no less) and a dealer sit around a table.  Each player represents the head of an army or other influential force, all of whom are temporarily allied together against an external force (the dealer, representing the House).  The goal of Hokum is to continue to win against the House each round while building up your defenses and stockpile of money up until the inevitable moment when the players begin attacking each other's holdings (represented by the tiles and stacks of chips), and the whole thing descends into chaos.  At the end of a full game of Hokum, there are only three possibilities: 1) one player has defeated the others subsequent to the destruction of the dealer and claims the entire pot; 2) two players remain in stalemate or cold-war, splitting the pot; or 3) the players all fall before the dealer.  In a multi-round Hokum tournament, players eliminated during a game lose their stake completely and are out of the tournament; surviving players (either via victory or stalemate) move on to the next round.

"The trick to being good at Hokum is timing, pacing yourself.  You want to be just bastard enough, and at precisely the right stage in the game."

Hokum uses standard poker cards, but "Hokum decks" are also manufactured, which are a double poker deck decorated in accordance with the themes of Hokum.  The tiles used for Hokum are typically wooden, although fancy gamblers sometimes own an ivory set; the tiles themselves contain numbers and abstract markings dividing them into seven 'suits' or 'types', representing things like fortifications, supply lines, natural resources, magical sponsorship, and the like.  When playing in upscale casinos or sponsored tournaments, table dealers will be masked as a lich, demon, or other threatening monstrous character; when the dealer is defeated, he lays the mask upon the table, and it is customary for spectators to applaud quietly at the defeat of the monster.

"When Billy told us he got a job at the casino dealing Hokum, we all chipped in to get him a mask that looked just like his wife.  Freaking hilarious is what it was."

Skilled Hokum play requires patience, a sense of opportunism, the ability to read ones' opponents, and to keep track of what cards and tiles have been played - as well as the odds as to what is likely to occur next.  A combination of intelligence, common sense, and interpersonal skills go a long way to making a strong Hokum player.

SIMULATING A GAME OF HOKUM

There's a Hokum tournament coming up in my online campaign, in which one or more PCs are going to participate.  Obviously, playing out games of Hokum isn't going to work within the context of a roleplaying game, and it's the exciting bits we care about.  To simulate the game-within-a-game, I'll use a series of rolls which are modified by the players' INT, WIS, and CHA at various points, complemented by their declared playstyle as selected from the below.  Each tournament player may declare their playstyle to include two of the below adjectives:

Aggressive - the player attacks early and often.
Balanced - the Hokum player attempts to juggle all portions of the game equally.  (This is the only playstyle trait which may be selected twice)
Chaotic - this player is all over the place, and sometimes makes moves that appear to make no sense initially.
Conservative - the player does not like to lose or risk losing money or tiles, and plays accordingly.
Defensive - the player focuses on contributing to the early "team game" portion while maximizing their own defenses for the later, chaotic portion of the game.
Diplomatic - the player tries to maintain balance between the players in the early game, and aim for stalemate in the late game.
Gambler - the player is willing to take dangerous risks for high pay-off.
Patient - the player waits for just the right "sure thing" before striking.
Sneaky - the player makes small, unnoticed moves which add up in the long run.

We'll see how this works out.