Keith wrote something about 'allodial systems of inheritance/fealty' and I briefly parsed it as 'colloidal fealty'...which led directly to this post.

The recent southward expedition of Messrs Heartley and Roundtree returned to River-Town bearing a number of unusual floral samples, a living specimen of a giant four-horned death-ibex, and an amazing account of the explorers' time spent in a small, previously-unknown settlement known as Djelu.

Situated in the center of a small caldera, Djelu is simultaneously an above-ground town, a subterranean complex, and a series of canals and tunnels running between the two.  The reason for this strange construction is simple: the residents of Djelu are almost entirely slimes, puddings, and jellies, those bizarre amorphous creatures which slop about like great whopping amoebae.

The learned Doctor Hornapple has been telling us for years - chiefly in his controversial monograph My Bones Are Shackles: Amorphous Intelligences and Cultural Bias - that the scum-sucking wall-sliders we recognize as 'slimes' may in fact be possessed of at least an animal-level intelligence, comparable to rats or cats.  Now, with the evidence provided by Heartley & Roundtree, if it is to be believed, then at least some specimens of these genera are blessed with human-level intelligence, or something approximating it. 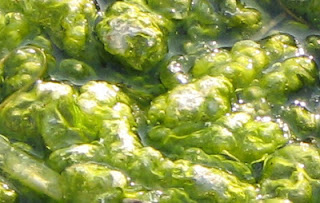 Within Djelu, innumerable subspecies of puddings and slimes not only coexist peacefully but cohabitate, interbreed, and work together on community projects such as repairing collapsed tunnels and carving out new canals or 'buildings' (typically hollows in the rocks).  While we outsiders know each phenotype by a handed-down etic designator such as 'black pudding', 'green slime', etc, the residents of Djelu refer to themselves all as 'meebs' or 'meeblings'.  Very few meebs can speak in a way that we understand, but they communicate with one another via a combination of shapeshifting, pheromones, and tactile empathy.

The meebs told Mr. Roundtree that their ancestors came to Wampus Country from another world [1], crashing to earth in a meteor ages ago; for his part, Roundtree suggests that the caldera is not a volcanic remnant, but the remains of the blast crater from a massive collision event sometime around the fall of the Owl civilization.  Meeb faith and tradition suggests that their cosmic purpose is to share knowledge with other species: "When there is ignorance below, the slime must descend from the heavens."

Heartley and Roundtree and their entourage spent a fortnight camped at the edge of Djelu, trading simple goods with the meebs and learning to communicate with them via hand signals.  As the touch of some meebs is at best painful, and at worst fatal to humans, very little cultural exchange was achieved over such a short time period, as the meebs speak most clearly when they are touching you.  And what a quandry!  A race of gregarious chatterboxes who touch to speak, and yet their touch kills.  Mr. Heartley wrote in the Gazette of the experience, and he posited that due to the need for the social reinforcement of tactile telepathy, a lone meeb encountered in the wild may be literally hungry for attention and desperate to give passersby a tragically fatal embrace of brotherhood.  Many meebs seemed enamored of the very concept of human comedy; Heartley goes so far as to suggest that a well-delivered joke might stop a slime or ooze in its slithering tracks as it attempts to understand the humor [2].  While meebs can be found throughout the land, it seems that distance from Djelu, and other meebs, is detrimental not only to their mood, but also their intelligence.  The oozes found in distant mountain caverns are the meeb equivalent of slavering savages relative to the genteel and culture Djelubians [3].

The explorers were shown, briefly, a metallic stone bearing meeb historical pictographs, something referred to as the Agar Codex.  Interpretation of the writing and artwork of wholly different species is something of an art form, but if the Codex is to be believed, the meebs were granted dominion over Djelu during the early days of Man, under the reign of the Peacock Throne, when the wise Huxt of Koz parcelled out the caldera, signed peace treaties and trade agreements, and named the meebs' leader an ethnarch under the contemporary empire.  It is for this reason most meebs refer to Huxt as the Father of Puddings, with great respect and bowed pseudopod.

To this very day, the meebs of Djelu are ruled by a hereditary king, currently one "Doobleep Kamoob", a massive lavender-colored pudding [4].  Beneath King Doobleep is a byzantine overlapping hierarchy which determines which meeb answers to which; color and viscosity are not sound indicators of caste, as centuries of interbreeding and shifting political relationships (not to mention fashion and social prestige) have ensured that only a native even has a hope of understanding who is whom [5].  Some of the younger meeblings actually attempted to hold a vaguely humanoid shape while the expedition was in town; perhaps, in time, we will see bipedal meebs gracing the streets of frontier towns as they wander forth to seek their fortunes and find this legendary thing called 'whiskey'.

Social forces within Djelu include the Church of Liquidity, a zen-like faith which encourages its followers to "go with the flow", and its counterpoint the very conservative Cult of Conformity, which demands its faithful take the shape of their surroundings (such cultists are known as 'cubes', a parallel to the human term 'square').  A number of more recently-budded meebs have demonstrated interest in swearing additional fealty to foreign lords and becoming vassals elsewhere in Wampus Country.  Curiously, while all meebs are hermaphroditic, from a cultural point of view Djelubians acknowledge seven different genders, some of which are adopted only during the holidays.

In the months and years to come, it is hoped that other brave explorers will return to Djelu and continue developing a relationship with the meebs, including rekindling the old trade agreements.  No, I don't know what we'd want from them, either, but it's the principle of the thing.


[1] - according to subsequent research by Dr. Hornapple, this homeworld likely sits in the northern sky as part of the visible nebula known in Wampus Country as the 'Stellar Marches'.

[2] - Rule: Telling a joke to an ooze of any sort forces the slimey thing to make a Save vs Paralyzation (bad puns apply a -2 to the save); if the meeb fails the save, it pauses for exactly one round.  This only works once, sadly, as a meeb who has failed to understand a joke becomes enraged and murderous in a fit of low self-esteem.

[3] - "Djelubian" is the accepted scientific and cultural term for a resident; some civilized meebs refer to their backward, underdeveloped cousins as "Djelibabies" to highlight their infant-like intellect.

[5] - Plus, not to be racist or anything, but all green slimes look alike, etc.  Until the communications issue is surmounted, meeb society will remain a frustrating puzzle.


OOZE-THING GENERATORS!
For making and naming new ooze-things with which to terrorize and surprise.

Roll a random ooze-thing name to replace the next boring old green slime in your encounter table and either just re-skin the stats or tweak to reflect the new nomenclature.  "Gods above and below, it can't be...it's an immense bloodsludge!"


Yes, yes, I know you want to play one of these, you can stop shouting.
Posted by Erik Jensen at 10:46 PM