In the course of providing (sometimes unsolicited) DMing advice to a friend, I have been forced to confront the "why" behind some of the things I do and don't do as a DM.  Years of playing and running build up habits, and sometimes we have a good idea why we do things, other times...not so much.  Now, I don't claim to be any sort of expert when it comes to DMing, but I like to think that I know a thing or two about what works and what doesn't work for me, at least, and there's nothing wrong with trying to translate these lessons for the absorption of others.  This is the first post along that theme...

I love to cook and am a bit of a foodie, so you'll have to forgive all the cooking analogies that are about to come tumbling out of my mouth.

D&D (and similar games; same applies to many sci-fi rpgs) is a glorious mish-mash of times, places, genres, and cultural pastiches.  It's a recipe for success, and has been since the game's inception.  It's also a potential pitfall when talking about setting design with a new DM.  There are so many wonderful options, you might be tempted to throw them all in there.

Just because you have a million options doesn't mean you need to use all those options; and, in fact, if you do use all of 'em, you're going to get a nasty mish-mash of garbage instead of an elegant mash-up.  Think back to the Teenage Mutant Ninja Turtles (the first cartoon version) and how they'd pile bacon, ice cream, anchovies, and gummi bears on a pizza.  It's amusing, but disgusting.  Would you go to a buffet and dump literally some of everything on your plate, then stir it all together into a gloppy slurry?  I sure hope not.

Awesome plus Awesome does not automatically equal SuperMegaAwesome.  Stacking everything you think is cool into a setting all at once is going to do several things: first, it's going to make things look and feel messy.  Second, your players are going to be paralyzed by the vast amount of crap laying around (or paralyzed by the choices when they roll up characters).  And third?  The original awesome vision you had for your setting is now buried under a bunch of other junk, all because you couldn't tell yourself 'no'.

If you're going to make a pizza, make an awesome pizza.  Use classic ingredients in the right ratio.  If you're going to make chicken tikka masala, do that instead.  Later on, when you're more experienced, if you want to try to make a "tikka masala pizza", go for it.  But start small and start clean.  That's the takeaway advice.  When you have more experience you can get crazy and play the DM equivalent of Chopped and mix weird stuff together just as an exercise.  Don't do that right now for your first campaign.

Start with an initial concept that you can state plainly.  Often this is a "LIKE/EXCEPT" statement - "It's like Renaissance Venice, except with noble houses of wizards in charge".  Other times it's just a general concept: "Hardscrabble rogues in the big fantasy city."  Write that concept down, because even though it might change a little during the setting creation process, you need to keep coming back to the vision statement as a reminder.

As you come upon things you think would be awesome to add to that setting, think long and hard about whether they fit your vision.  Maybe they do, maybe they don't.  You may come upon (or come up with) stuff that doesn't quite fit your vision, but is so inherently cool that you decide to tweak your vision to accommodate - and that's fine, too.  You're going to have some 'setting drift' as you go on.

Don't assume that your setting needs to have everything that's legal in the game.  Restricting races, classes, and spells isn't screwing your players, it's determining the initial flavor of your game.  If you're running a 3.5 game and tell your players "anything from any book", you're hanging yourself - not only will they arrive at the first session with all kinds of weird crap that might not 'go with' your setting, but they're going to roll up characters with powers you haven't read yet!  That will not help your confidence or control at the table.  If you don't know psionics, don't let 'em be psionicists.  Saying "no" is not cruelty, it is a mercy.  And don't shoehorn every monster in the damn book into your campaign, either.  Limiting the sorts of monsters you use is also controlling the palette of your setting.  If you want the classics, great - reskin 'em to fit your setting. (We'll talk a lot more about reskinning in a later advice column).

Don't assume that your setting needs to have stuff that everybody else uses.  Cthulhu cults?  Demons?  Drow?  Druids?  Only if they make sense in your setting.  When in doubt, leave it out - you might get inspired down the line (especially once the game is 'live') and find a good way to incorporate something later.  The start of your campaign is the first course of the meal - there might be some flavor shifts later and that's fine.  Yes, steal good ideas mercilessly and without remorse; but don't feel like you have to do "what everybody else does". 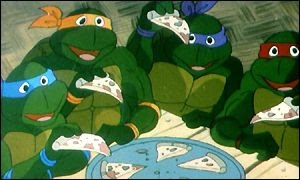