Unless your internet has been living under a rock lately, you're probably aware that the Marvel Heroic Roleplaying (MHR) game line has been cancelled.  You've probably also seen some commentary here and there - on the Plus, on various fora of ill repute - regarding this modern-day tragedy.  This industry development - and the fact that I sat down with a copy of the core rules directly after it - brings us to this post.  I don't usually do "industry stuff", but here 'tis, my (uninvited) thoughts on the matter.

I love superheroes, so it only makes sense that I enjoy the idea of supers rpgs - and I like Marvel Super Heroes (MSH, the FASERIP game) the best, for a number of reasons - chief being ease of use.  I disclose that now, for fear of appearing unduly biased moving forward with this post. 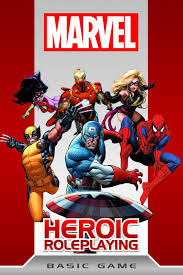 Here's the thing about the MHR cancellation: people straight-up freaked out.  Wailing, gnashing of teeth, the sort of thing we often see when a game line (or beloved television show) gets cancelled.  We also saw some individuals getting really grumpy at Marvel (and in some cases, Disney by extension), for apparently being horrible corporate meanies focused on profit instead of genius (see also: Firefly fandom and Fox, and all the good it did them).  Let me be clear about this: be mad at Marvel if you want, but it takes two to tango.  Margaret Weis Productions (MWP) signed some sort of contract and licensing agreement to get use of the Marvel IP for rpgs, and they knew full well what was in whatever agreement they signed.  Period.  Was MWP too ambitious?  Did something go wrong with the rollout of the line?  Short of getting MWP staffers really drunk, I'll never know, and that's fine (and it's none of my business anyway) [1].  Speculation is probably more fun than knowledge, that's a human nature thing.

I had flipped through the core book when it first came out, and put it back on the shelf.  It didn't seem to be for me.  Rereading it in the last week, that judgment stands - MHR isn't what I want in a supers rpg, and that's okay. Now brace for the compliment: MHR is exactly what MWP wanted it to be [2].  What do I mean by that?  It's a narrative-driven rpg affixed to an Event-driven marketing scheme (which mirrors the way Marvel's been doing comics for some time now).  MHR has lots of clever bits in it, I'll gladly acknowledge that (much in the same way my wife, allergic to cinnamon, can appreciate the beauty of the latticework on an apple pie, I suppose).  There is an elegance to the mechanics that even I can see, and I've no doubt that it does precisely what it was meant to do; but what it's meant to do isn't what I want a supers rpg to do.

Things that jump out at me about MHR that signal it's not a game for me:

* The narrative nature of it - plotting character arcs - doesn't scratch my itch.  Some folks dig that, and good on 'em.  I'm not going to whine that it isn't an rpg - but it's certainly on the avant-garde end of the spectrum, that's fair, right?

* The game is not laid out in a way which is friendly to new roleplayers whatsoever; it's full of fiddly bits which are not explained in a matter that makes it easy for an inexperienced rpger to pick up the concepts.  This dovetails into the (now well known, and only sort-of-accurate) complaints that MHR lacks 'proper' character creation.  I don't see the point in arguing about whether it does or doesn't, I think it's safe to say that the game certainly does not put the creation of original characters front and center.  Nor would it, as that wasn't a design goal (that much is evident).  I've seen some people complain about the "same-ness" of PCs, and I can see that, but I think that, too, was a design goal.  MHR is intended to be about the characters as ...well, characters in a story arc, not as PCs.   They're PCs, too, but they aren't measured by their ability to interact with the game world, they're measured by their ability to interact with the story which takes place in the game world.  There's a difference there. [3]

* The solo/buddy/team mechanic is clever, and is obviously in place to emulate certain aspects of comics writing-physics, but since I haven't actually played the game, I have no idea whether they actually work.  The core rules don't really address solo play, and I think a supers game that calls out the difference between "Spider-man in his own book" and "Spider-man when he's in an Avengers book" probably should - missed opportunity there.  This is just one feature of the game that I don't think gets enough explanation.

* The Event-based releases and marketing really turn me off, because they highlight the fact that the game is designed to default to 'theme park' rather than 'sandbox'.  Believe me, if there were better terms than those two, I would use them, but that's pretty much what I'm getting at.  The Event marketing is a big reminder that MHR is, at its heart, not about creating your own characters.  Would MWP have ever gotten around to releasing something that covered gadgeteer characters and building a superhero HQ?  These kinds of things are, to me, central to the supers rpg experience.  They take a back seat (like, three miles back on the highway) in MHR.  I think that strikes a mighty blow against player investment in a campaign.

We can ruminate all day on "what went wrong" with MHR, but really, it's not about what went wrong -- MHR does everything the designers wanted it to do.  It just isn't much of a supers rpg, in a wider sense.  Now, don't get me wrong, I know lots of people love the game and have run successful campaigns with it, and that's awesome (and I hope they continue to get good use out of the material post-cancellation).  But MHR is not for newbies, and it's not for kids.  And, again, that's the point.  A supers game like Marvel Super Heroes (FASERIP!) emulates the comics of its era (light, fun, four-color, action-driven, easy to pick up); whereas MHR, instead, emulates the comics of the last few years, after the advent of Bendis et al (dark, "adult", talky, character-driven, "serious", not as easy to jump into).  Which means I can easily (maybe too easily) make the same complaints about MHR that I tend to make about 21st-century comics and the seeming decline of that industry. [4] 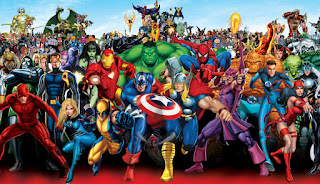 And that, my patient rant-readers, brings us to the "what would I have done" part of the show.  What good is speculation without woulda-coulda-shoulda, right?  A very natural exercise, and one in which we certainly must partake - especially given the success of the Marvel movies.  It's totally reasonable to look at the MHR run and think "How could anybody have the Marvel IP and not make money?".  (Side-note: presumably MWP did indeed make some money with the IP - the situation is more complex than armchair quarterbacking, I get that - but second-guessing strangers on the internet is a thing we do.)

Okay, armchair quarterback helmets on.  How to do a Marvel rpg "right"? [5]

* Choose your target audience and design accordingly.  Note that MWP did this, they just chose a target audience of experienced hipster roleplayers (or maybe Quesada's people mandated that they target current comic book aficionados between 25 and 40, I don't know).  I would instead aim for a younger crowd, and design a simpler game.  If the simple game is successful, you can add complexity in degrees later.  Put it in a smallish box, call it the Avengers Adventure Game or something, and go from there.

* (Probable pipe dream) Work with Marvel to market your product as widely as possible.  The shelf at Wal-Mart and Toys-R-Us is your goal, not the shelf at the FLGS (sorry, FLGS).  If you have a younger-skewing intro type product, this looks more possible (but still a pipe dream, I know, I know).  Don't aim for people who have reserved boxes at the comic shop, you'll get them anyway.  Aim for the kids who watch Earth's Mightiest Heroes and Ultimate Spider-man.  Aim for the kids who were reading Marvel's (really quite excellent) all-ages books. [6]  Hell, you could do it all with art recycled from those books if you wanted, and you'd have a nice multicultural Avengers to play with instead of the "why is there only one girl and she has no powers" version we have in the movies; although tying-in with Earth's Mightiest Heroes (which is still published) would be awesome.

* I'd go boxed, given the option (this lines up with the Wal-Mart argument), and I'd put dice in there and little plastic superheroes and/or paper fold-ups, and a fold-out map to go with them.  Lots of different boxes (Iron Man, Thor, Hulk, Spidey, whatever), matching six-siders (red with gold pips for Iron Man, you get the picture).  Different box art and titles, but they all have the Avengers Adventure Game logo in the corner, and the basic rules (VERY SHORT) in the box, plus a book of adventures and villains, and the assorted doodads.  Collect 'em all.  If my Mom buys me Iron Man: Revenge of the Mandarin, and Johnny gets Captain America: Against HYDRA for his birthday, we're compatible and ready for a team-up immediately when we go over to Suzy's house and she runs the adventures from her copy of Incredible Hulk: Gamma Planet for us.  Bing-bang-boom, roleplaying game for kids, or for nerd-parents to play with their kids.  Put a Marvel comic (reprints, of course) in EVERY BOX.  Keep the price point as low as possible.  Do up a website with new content (an adventure, or villains with fold-ups, or assorted proper-scale papercraft) every week.  Think long and hard about how many people have incredibly fond memories of Heroquest as a gateway to 'proper' roleplaying.

The bottom line is that the future of Marvel fandom is not held by people my age arguing about how awful the Sentry is. [7]      It's here: 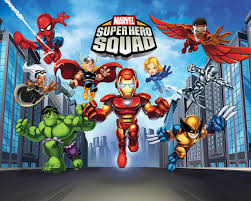 The MHR fans will get their Cortex Plus, and they'll be fine, and I wish them all years of great gaming with whatever system and setting they love best.

[2] - The horrible snarky version is, of course, "MHR is everything MWP wanted it to be, except wildly profitable".  But that was on the mean side, so it goes down here in a footnote like some kind of confessional.

[3] - Again - and I guess I can't say this enough - MWP was very successful in achieving their design goals, that much is evident.  It's just that I don't (apparently) share any of their goals, so I don't get anything out of MHR.

[4] - MWP staffers, when we get trashed together, you'll hear this rant, as well as my Quesada impression.  Nothing to write home about, but probably pretty funny once we've been drinking.

[5] - You'll note how much of this resembles choices TSR made with MSH.  Complain about TSR all you want, but for a stretch there they really knew what the hell they were doing as far as riding the wave of the rpg fad and marrying that to a good license.  (You hush about Indiana Jones, obviously that's the counterpoint, but also look - the Indy game also made the suspicious choice of presuming you would play canon characters and not make up your own, which was surely a death-blow to WAITAMINUTE)