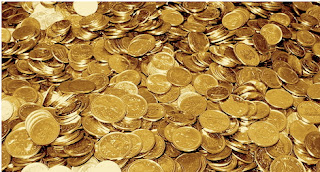 Although in many localities barter is common, it is the dollar which makes Wampus Country go 'round.  Gold, silver, and copper coins are in circulation, as well as paper notes with a value equal to multiple gold coins.  Most frontier adults are savvy enough to recognize obviously fake or clipped coins; don't be surprised if some of your gold pieces have bite marks in them.

COINAGE is minted by multiple concerns, including the Silver Scorpion Casino in River-Town - which, as you know, is run by religious-types.  The Red Bear Lumber Company also mints its own coins.  Some mercenary groups or other collectives mint their own coins as well.  Any coin which is 'known' to be of the proper weight and value is generally accepted throughout the Wampus Country; counterfeiters have a tendency to meet with grisly ends.

Coins from the Western Kingdoms don't last long in Wampus Country without being overstruck or melted down.  Just as it is considered rude to even discuss the 'old countries', it is bad luck to carry Western coinage, and a grave insult to attempt to pay using it.  Strange foreign coinage (from Khelibesh, or Kax Ak, or someplace weirder or possibly off-world) is acceptable in most places so long as it's the proper weight - but even extraplanar money will eventually be overstruck by someone, or melted down as part of a $30 gold bar.  Some merchants keep a scale handy - if necessary, they can bite every coin, pile them onto the scale to get the total weight, and then discount the gold based on the vibe presented by the customer.

GOLD PIECES (1gp, $1) are minted in yellow or reddish gold, and are about the same size and weight of a modern American dollar coin or quarter.  The Silver Scorpion Casino (and associated Scorpion Cult) strike dollar coins with a scorpion on the obverse and varying designs on the reverse.  The Waterfront Collective (a merchants' guild in Frogport) issues gold pieces which are clad on the reverse in copper with the image of a frog; these pieces tarnish rapidly, as copper is wont to do, and are known as 'greenbacks'; despite this decoration, they are still valued at a single dollar each.  Several years ago, a fad arose whereby ladies and gentlemen of means would purchase (via catalog) a hand-crimping machine and contract a local artist to sculpt and cast a personalized die, so they could overstrike coins themselves.  This development has led to a wondrous proliferation of gold-coin designs recently, and helps explain some of the stranger ones seen in circulation.  Wealthy individuals may go so far as to strike commemorative birthday coins or the like, which they then hand out to party guests as a sign of their largesse.  A hand-crimp for overstriking, along with two custom dies, will set you back about $200.

SILVER PIECES (10 to the dollar) are similarly minted in silver or some amalgam; occasionally "silver" pieces which are primarily nickel or some other metal turn up, and these are typically valued at twenty to the dollar if they have appreciable silver content.  COPPER PIECES (100 to the dollar) are often well-worn copper slugs with little or no ornamentation.  Most are circular in shape, but those pennies flattened into oblong novelty talismans - at places like Thunderbolt Black's Action Show, or the Diamond Peacock bordello - are still considered acceptable currency.  Pennies are only rarely called "pence" in Wampus Country.

PAPER MONEY is fairly common on the frontier as well.  Several large businesses print their own paper notes, redeemable for coin, as a means of settling debts or paying their employees.  Paper money has some advantages in terms of portability, and tends to be printed in larger values.  Most paper notes are horizontally-printed on cotton paper and are of comparable size and shape to the modern American note.  Intricate and grandiose designs in colorful inks are common for paper money.

The notes vary in value (usually $10, $20, $50, $100) and color; many issued notes have acquired nicknames based on their value or appearance, such as the "lobster", "loon", "beaver", etc.  The "Fin", for example, is a five-dollar bill printed in blue and yellow and bearing the image of several fish.  The "Saw-Buck" is a crimson and orange paper note, worth $10, issued by the Red Bear Lumber Company and in use widely throughout the north.  The obverse depicts two loggers using a massive two-man saw to fell a tree; the reverse shows a majestic ten-point deer.  Although not often seen these days, there was previously available a hundred-dollar bill which showed a galleon at sail upon a raging ocean (a "sea note").

MONEYCHANGERS, as a profession, are quite rare in the Wampus Country, as they are culturally superfluous.  There are businesspersons who will gladly melt, mint, or overstrike someone else's coinage for a small fee, however.  PRIVATE BANKS are a new concept on the frontier - there are two young banking establishments in River-Town, both of which have begun issuing their own currency - which, of course, is in line with customer expectations as far as size, shape, and value of the notes.
Posted by Erik Jensen at 8:21 PM