The G+ game of Wampus Country has been going pretty well of late, and I hope it'll continue to get better and better.  At this point I pretty much have a 'core' group of four players, with other FLAILSNAILS PCs joining on a rotational basis.  Just last week, we had another new player and PC, a Wampus-native illusionist of all things, so we'll see whether Abel (a failed novelist) ends up as part of the perceived-to-be-core crew or what.

The central focus of the party so far seems to be the lovingly-named Charnel Caves of the Necronauts, an old tunnel complex full of catacombs and such, one entry to which was hidden beneath the zombie beaver dam.  They've made two delves into the Charnel Caves - one into an ossuary where they faced a skelemental (quickly dispatched thanks to James Ironwall's magic spear vs undead); and the second, into the catacombs where they faced the Ghost Brides.  Now, the Ghost Brides themselves were all mortal death-cultists, but their leader, one Phineas Gristle, was a quite insubstantial gentleman.

Like all wise first-level-average adventurers, they ran the hell out of there.  But not before the cleric, Ornibus Jones, (rightly) thought it wise to use a scroll they'd just found - a scroll which seemed dedicated to banishing all things ghostly - at least temporarily - but also contained an unspecified curse effect.  Ornibus intoned the ancient syllables, and the spirit of Phineas Gristle hot-footed it out of the room.  Wary of his imminent return, the PCs beat feet.  A few rounds later...Ornibus had the head of a platypus. 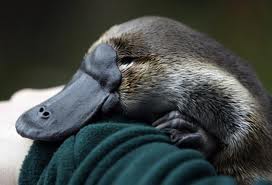 Now, some players would have gotten upset about this.  Maybe not most FLAILSNAILS folks, as they're pretty gung-ho by definition, but some whining was definitely in the realm of (historic) possibility.  Thankfully, my Wampus Country players are awesome, and everybody rolled with it.  If a silly curse is a feature and not a bug, something's going right.  I hereby dub the ability of a gaming-group to roll with the punches in good spirits to be known as 'the Platypus factor'.  Either a player has it or they don't.

The player of Ornibus even went so far as to figure out how to superimpose a platypus-face over his own in the Hangout app - for which he duly received xp, of course.

The next session, the PCs decided to put a return to the Charnel Caves on hold in order to get their poor, unhygenic madman of a cleric un-cursed, which, sad to say, required a trip to see the Stump-Witch and frightening some meandering pink elephants.  Ornibus seemed relieved to have his 'real' face back after a witchy session of flesh-cutting with pinking-shears...but now the Stump-Witch has a nice sample of Ornibus' blood.  Wonder if that might come up later.

Returning to the sleepy frontier town of Thistlemarch, the party assisted some tailors with a rat problem - well, more accurately, a "bunch of rats in a man-suit" problem, and managed to slickly talk said businessmen into sponsoring Horvendile Early for an upcoming gambling tournament.  I'm desperately trying to figure out how I want to run that gambling tournament, but really looking forward to it.

More importantly, perhaps, the PCs now have a house that's ostensibly theirs, the former owner being either missing or eaten by rats (we're not quite sure which just yet).  Nothing wrong with a home base for low-level PCs, even if it stinks of torched rats.

What's next?  Presumably a geared-up return to the catacombs to kill the ghost of Phineas Gristle!  And at some point after that, collegiate wizard Chauncey Woolstrike needs to do a favor for a completely different witch...so it'll either be a trip to Saltvale or tangling with nasty little devil-fairies.  Something to look forward to, indeed. 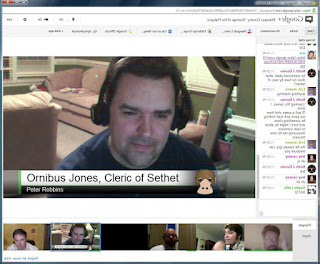