Mascot Monday: The Curse of Al-Fulaq

The lengthy battles at Cadaver Canyon have shaped the lives of many in Wampus Country, directly or otherwise, and often for the worse. One such victim is the creature formerly known as Skadmanzell the Slayer, a wizard-hunter of some repute, who came to the Wampus Country to serve alongside the forces of Law and civilization in the war against the Great Desert Lich.


One of the Lich's sorcerous lieutenants - plied by the secrets of lichdom no doubt - was the dark wizard Al-Fulaq, a reaver and torturer capable of inflicting great magical pain upon his foes. During the conflict, Skadmanzell earned a reputation as a callous commander, suggesting that the wounded and dead could easily be replaced with cash. On the third day of the second battle of Cadaver Canyon (also known as the Font of Blood), Skadmanzell the Slayer waded through scores of undead warriors to strike at his target Al-Fulaq, and the battle between the two was joined on a rocky promontory. Skadmanzell's blade [1] took Al-Fulaq's life - but not before the wizard uttered his death-curse.


The wizard-hunter was transformed into a simple white duck, his memories scrambled. In the aftermath of the battle, Skadmanzell was lucky not to be cooked and eaten. In the years to follow, the strangely long-lived duck has wandered about Wampus Country, seeking a cure to its curse, to no avail. Recently Skadmanzell has hear rumors that Al-Fulaq lives on in some sort of undead form [2], and the duck hopes to make himself a familar to an up-and-coming wizard in order to steer destiny and find Al-Fulaq.


Unfathomable - The duck's mind cannot be read by any means, magical or psionic. Nor can the duck speak (even with magical aid), other than to accusingly quack the name of the dread sorceror who cursed him. Skadmanzell has only fleeting memories of his former life, including his origins, family, and one-time musical talent (although if presented with a toy piano it can peck out the melody to 'Little Wing' pretty well).

Sympathetic Compensation - As some strange side-effect of the curse, when friendly characters within 10 feet of the white duck are injured, the waterfowl coughs up copper pieces equal to the hit points lost. If bonded as a familiar, the white duck will compensate regardless of the distance between the wizard and itself.


[1] Skadmanzell's blade is now lost somewhere in Wampus Country; it is a shortsword +2, +3 versus spellcasters.

[2] Al-Fulaq is now an Eye of Fear and Flame with additional wizardy powers. He was last seen disappearing into the City of Mazes beneath Big Eagle Mountain. 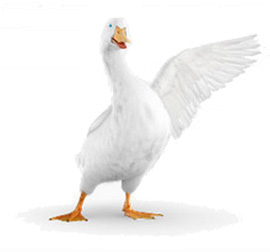