Running a D&D-like game with firearms invites an obvious question: what about enchanted firearms and ammunition? We have enchanted swords, why not magic revolvers? I can hardly blame my players for asking - and perhaps they're also understanding of why I've been avoiding the question. 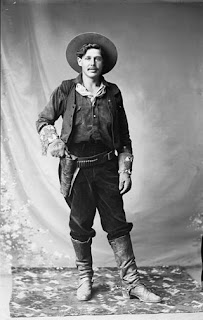 To me it's a bit of a sticky wicket.  Given that in Wampus Country pistols and rifles are essentially reskinned bows, there probably ought to be enchanted firearms or bullets.  But at the same time, I don't want  things to turn into "who has the biggest plus on their revolver", either.

The compromise seems to be to allow for enchanted ammunition that is situational in nature, or difficult to acquire.  The sort of thing a character may wish to acquire when the opportunity presents, but won't want to waste by loading every day.  More like magic arrows, some with different effects.  And none of this stuff should be available in a store, of course - you should be getting it from fallen enemies, making it yourself, or something like that.

That's the vibe I want to impress into the game; bullets (and other things) are not necessarily magical because some bearded git threw a spell over them to that end; they're magical because of their origin and the care with which they were re-crafted into weapons.  So, to that end, here's a list of things a Wampus native might collect to get made into magic bullets, conveniently (and habitually) organized into a random table.

1 the gemstone eyes of an earth elemental, carved & filed
2 the strange silver nail-file you stole from that fairy-queen, melted down
3 the thighbone of an ancient undead creature, carved & filed
4 wooden bullets made from an old gallows which hanged a hundred innocent men
5 confectionary bullets made of peppermint, with a liquid core of the tears of a newborn baby
6 ancient brick from a fallen temple's altar, carved & filed
7 made from a shard of the shattered sword of a legendary hero
8 a round forged of cloud-stuff
9 bullets made from the housing of that strange metal spaceman who just tried to kill you
10  metal is mundane, but has been melted and re-formed in the fiery heart of a fire elemental several times
11 carved from the chitin of an ancient giant crab
12 a chunk of devil-horn, shaped and polished
13 mud from a magic mud-man pit, placed in a mold and dried at high noon
14 the tiny conical skull of a micro-fairy that just so happens to fit nicely in your rifle...
15 forget buckshot, this shell is full of a witch's fingernail clippings
16 the tooth of the oldest razor-maw in Snollygoster Swamp, stolen while it slept!
17 the promise-locket of a lost love, melted and shaped into a bullet
18 oddly-shaped thorns from the singing rose-bush in the mountain fairy's garden
19 chunk of a captured rainbow
20 bullets of blown glass, filled with the last breath of a dying man

When running a campaign, if we want magic to feel...well, "magical", the onus is on us to maintain that feel.  The tables in the books aren't going to do that for us - in fact, those listings rather work against the magical nature of the items they enumerate. 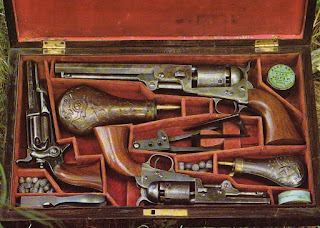