GASTROGNOMES
Small humanoids living in family groups inside hollow trees, the gastrognomes are masters at cooking and baking.  When a group of gastrognomes has nested nearby, the smell of fresh baked goods wafts throughout a large swath of the forest.  While the gastrognomes often trade their creations to other inhabitants of the forest - talking animals, fairies, and the like - they do not customarily supply humans, and in fact will jealously guard their food and recipes from interlopers.  The cookies and cupcakes created by the gastrognomes are uniformly delicious, and some have potion-like effects if consumed with milk.  On occasion, rogue gastrognomes will abandon their families and travel extensively in search of new ingredients and recipes; some of these roamers have served as cooks with mercenary companies or bandit gangs for a short time.

The appearance of individual gastrognomes can vary wildly, but they tend to range between six and eight inches in height.  There are dark rumors that a nefarious sorceror has forcibly crossbred gastrognomes with halflings and uses the results as slave labor within his hidden chocolate factory, where he plots to overthrow the Witch-Queen of Sugarplum Castle.

Gastrognome families operating in the same area tend to be friendly rivals, attempting to one-up their neighbors with more delicious recipes and elaborate decorations.  Most gastrognomes have good relations with the dough-folk and maple-spirits; however they hate spoiler-pixies and will quickly band together to drive one out of their territory. 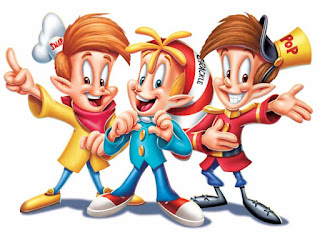 WHAT'S COOKING?
Random gastrognome creations for use in generating smells or treasure when you cut that damn tree down. 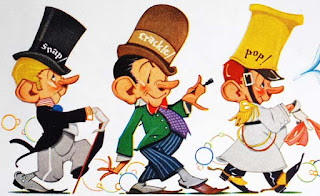 A few well-respected gastrognome families have mastered a form of baked golem construction, whereby they craft a fairly large (near human-sized) golem out of baked goods in the shape of a humanoid cupcake or the like.  These creatures are then either piloted from within by a team of specially-trained gastrognomes, or, on occasion, given real life and intelligence through hidden rituals.  Usually these living baked goods strike out on their own in the world, seeking to make their fortune, but it can be difficult to achieve success in a world where everyone wants to eat you.

"Mascot Monday" is going to be a thing now.  You've been warned.
Posted by Erik Jensen at 10:26 AM