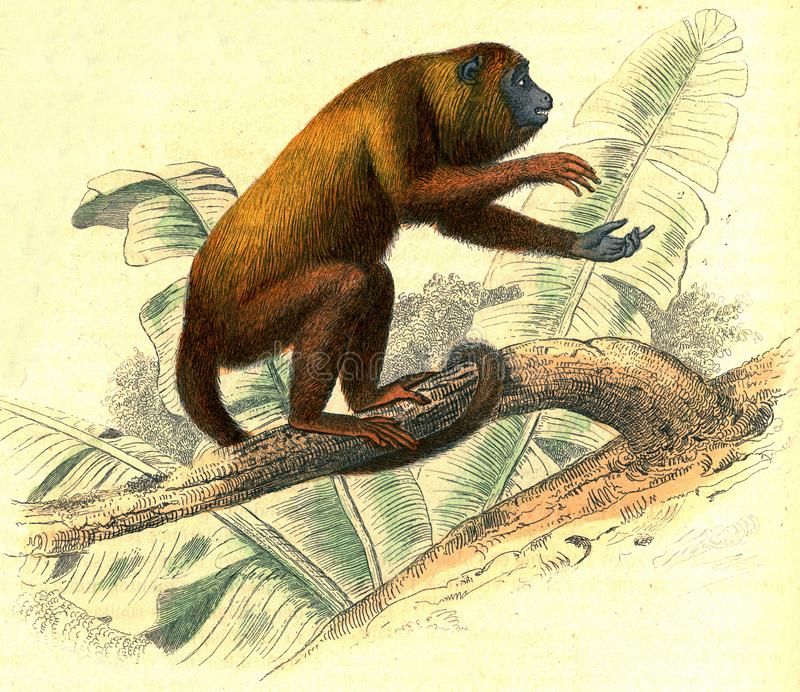 Of late, rumors of a fresh outbreak of monkeyplague up in the Freeholder lands has caused some small concern among savvy wizards of Wampus Country.  It is believed the monkeyplague is the remnant of a failed attempt by a magic-user from the Time of Apes to create a virulent disease which would turn other humanoids into simians, in a bizarre attempt to stave off the decline of that civilization.

Two things are certain about the monkeyplague: first, that it mutates the infected to a greater or lesser degree, and second, that those who are fearful are far more likely to become infected when exposed to a carrier.

A person who spends more than five minutes or so within fifteen feet of a monkeyplague carrier must make a saving throw against a fear-like effect (depending on your local metaphysics, this could involve resisting enchantment, magic in general, or something to do with your Wisdom).  Bonuses to save versus fear or charm effects apply.  Those who succeed on the saving throw will contract a Minor Monkey Mutation which appears within 1d6 rounds, and lasts for about twelve hours.  Those who fail on the throw will contract a Major Monkey Mutation which will last permanently, or until a combination of cure disease and remove curse is laid upon the victim.

Humans, dwarves, and halflings can definitely become infected, and will be communicable for around twelve hours.  Simians, orcs, goblins, and so on are immune to the disease.  Elves and gnomes cannot become infected by the monkeyplague due to their faerie ancestry, but can be communicable carriers for twelve to thirty-six hours.

1  MONKEYFACE.  Your head shapechanges into that of a small monkey (your choice; may I recommend one of the dapper marmosets?).  Yes, the whole head, so it’s tiny monkey head on your normal human shoulders.

2  MONKEYFEET.  Your feet painfully shapeshift so you have a thumb-toe.  These boots are ruined.  With practice you can do tricks with your feet (like throwing playing-cards into a hat), but you cannot wield weapons or use normal objects with them.

3 MONKEYTAIL.  You gain a semiprehensile tail.  It is insufficiently dextrous to use weapons or tools, but you have +3 on any checks to climb trees.

4 OOK.  Your ears enlarge slightly and grow fur, but you can now understand the tongue of the great apes.  You do not automatically speak it, but have the capacity to learn to speak it.

5 IMPROVISED WEAPONRY.   You instinctively know that you are now pretty ace at flinging poop (+5 to hit if it’s your own scat, only +2 if it’s somebody else’s).

6 HOWLER.  Your throat and lungs overdevelop, allowing you to bellow loudly and be clearly heard a mile away.

7 GIBBON IT ALL YOU GOT.  You gain the ridiculously-long arms of a gibbon, which drag on the ground.  Neither your strength nor dexterity improve.  With your arms and fingers all weird, and these janky elbows, you’re at -2 with all weapons for at least three days if you still have the arms.

8 BARREL OF MONKEYS.  Over the next 1d10 rounds, you vomit up 1d3 spider monkeys per round.  These are normal monkeys which will scurry off and do monkey things immediately.  If it happens to be a full moon, the monkeys are winged, and fly out of your butt instead.  Either way it’s painful and embarrassing, but you suffer no harm, other than perhaps missing those monkeys once they run off.

9 MONKEYBLINDNESS. Regrettably, all simians, apes, and monkeys are now invisible to you.

10 BANANA STENCH.  You smell strongly of bananas, out to twenty or thirty feet.  Many monsters and beasts will smell you coming, or be able to follow you by smell.

Victims of any full-shapechange result will thenceforth count as both simians and persons for the purposes of adjudicating magical effects.

1  MONKEYFORM.  You’re a small monkey now.  You can still talk, and use a dagger as a two-handed weapon.  Reduce STR, CON, and INT by 1d8 each.  You probably retain your class abilities, unless a stat drop screwed you over.

2  OLD MAN OF THE WOODS.  You are an orangutan now, with vibrant orange fur and a weird face. You gain a halfling’s ability to hide in the forest.  You may still talk and use weapons & tools normally.  If you happen to be a cleric, increase your WIS by 1 point, Doctor Zaius.

3  HUMANZEE.  You’re now mostly chimpanzee, but still a little human. Once per day you may boost your STR by 1 point for 1d4 rounds.  You can still talk and use weapons and tools normally.

4  HUMANDRILL. You are now a mandrill with a gigantic blue ass that glows faintly even in magical darkness.  You can still talk and use weapons and tools normally, but dating may be problematic outside of a major city.  With sufficient downtime and training, you can teach your gigantic ass to glow different colors in the presence of certain types of creatures (undead, orcs, lawyers, etc).

5 BOON OF THE BAB.  You are now a baboon.  You shed all your class levels and can only speak the tongue of the great apes; however, your Charisma is considered 1d6 points higher by baboons.  Soon you will gather about you a loyal troop of baboons to do with as you please.

6 AMATEUR SIMIAN.  You shapechange-regress into a lemur, bushbaby, or slow loris.  You are subject to the find familiar spell of any wizard within range, the effects of which will remain even if your monkeyplague shapeshift is cured.

7 MONKEY ON YOUR BACK.  You grow a conjoined chimp on your back; you share a spine, a nervous system, and your cardiopulmonary systems are linked.  You feel each other’s pain, and share a single pool of hit points (your current max, plus 2d8).  He is a normal chimp, and wants normal chimp things.  Your clothes and armor probably don’t fit anymore, but since you have a chimp looking behind you all the time, you’re impossible to surprise.

8 PITHEKOTOKOS.  Congratulations, you’re now pregnant with an ape baby.  No, I don’t care what your sex is.  In 1d6 weeks you will deliver a perfectly healthy su-monster which, while still considerate of its relationship with you, is irredeemably evil.

9 OOK-OOK. A slight change to your larynx and lungs, plus instantly-developed instinct, allow you to speak the language of either the great apes (70%) or the small monkeys (30%).  Once you know one, you can spend four weeks’ downtime with the appropriate critters to learn the other.

10  PRAISE HARAMBE.  You are now a noble gorilla, losing the power of speech but boosting your STR and CON by 1d4 points each.  You develop a fondness for kittens, and your alignment shifts one step toward Good or Law, as is appropriate to the campaign metaphysics.

Writes noted wizard The Magnificent Montranto in private correspondence, “It’s only a matter of time before some gang of brigands all infect each other and we have a roving gang of monkey mutants to deal with.”