Hand Over The Reins

The best gaming comes from high-trust setups.  If you and your players trust each other, you can do seemingly crazy things like assign Patrons to real people, or let someone else DM your campaign for a bit.  It certainly seems like many of the "improvements" people try to build into rpgs or rpg culture are designed to compensate for a low-trust situation.  That's a shame.

I strongly encourage you to let someone else DM your game, if only for a session.  Once you do it, and see that your world has not crashed and burned, you'll be more open to doing it again, or empowering players to take on more responsibility in the campaign.

Some years ago, in a BESM game, I had each of the players take a turn running a session, and that paid off handsomely.  They did things I wouldn't have thought of doing - and that's the point.

In the Wampus Country campaign, I've handed over the reins twice that I can recall...

Drawing from the Deck of Many Things had been eventful for all of the Rat-House Bastards, but most of all for Chauncy.  He had pulled the Gaol card and gotten himself imprisoned on another plane.  Whoops.  After several months trying to figure out where he'd gone - with the player using a different PC - they learned he was trapped in a place called Carcosa, and went to get him.  You can read about it from the player's point of view.  If you're not familiar with the Carcosa setting, there are plentiful reviews which might demonstrate it's pretty different from Wampus Country.

The interesting thing here was that one of the other players volunteered to run a session (or sessions) that constituted the rescue attempt.  I acquiesced immediately, trusting that Brendan would do a great job with it.  It was understood that he would have the choice of interplanar destination in which to set the whole thing, and that it would not necessarily comport to Wampus Country physics (and expectations of lethality).  This was borne out when the amazon warrior I was playing for the session got messily killed!

The session had some permanent effects on the campaign.  First, the wizard Chauncy returned changed - physically, and mentally.  His roleplay was different from this point, and that seems only fair given the torture he had endured.  Second, one of the Carcosan natives came back with the gang to Wampus Country.  Though he took the name 'Miguel' eventually, this was the Speaker-of-All-Graces, a savage bone man warrior who later participated in the Coalpepper Expedition.

I admit I balked at the idea of the PCs bringing the He-Man tank back through the portal.  I think if I were doing it today I would've let the chips fall where they may.  Trust takes practice. 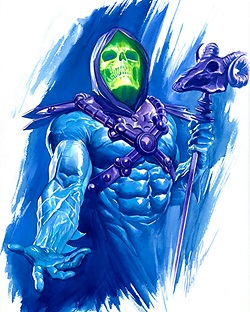 Some time later, the player of scheming wizard Valentine McGee asked if he could run a couple sessions taking place in Wampus Country, for the benefit of the (sizeable) player pool.  He wanted to run The Mad Chefs of Lac Anchois from Dungeon #64.  I took a quick look at the adventure, a comedy setup about rescuing frog-people from giant chefs (which was what made him think it Wampus-appropriate) and said "yeah, go for it".  I couldn't make it for the sessions he scheduled, and that was fine.

Later on I got a readout from the Guest DM - no PC deaths, although I think there were a couple close calls, and no bizarre magic items that I recall.  By all accounts it was a fun pair of sessions.  I have no idea what happened at them.  That's okay.  I'm the head referee, not the all-seeing eye. 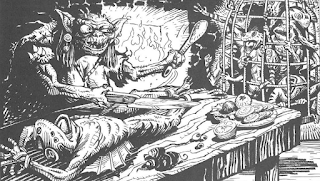 You can, and should, do this too.  Hand the reins over to someone else for a session or two.  Take a break.  Play alongside your players and see your campaign from their vantage point.

Thematically related, check out this video in which Mr. Wargaming farms out the results of a battle to people not involved in the campaign: