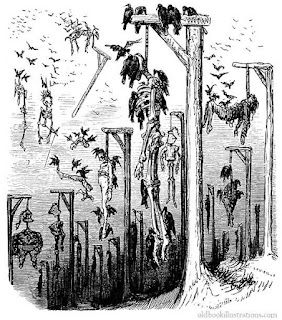 A recurring issue throughout Wampus Country is that unliving scourge known as the gravekinder - ambulatory, sentient corpses who feast on the flesh of the living, despoil cemeteries, and work in small groups here and there throughout the countryside.  Sometimes called ghouls or chompers, they may be found at the edge of towns or lurking in ancient necropoli; the gravekinder also haunt the darkened woods and swamps.  Wherever there is meat to be had, human or otherwise, the gravekinder can survive.

Gravekinder are quite obviously dead when seen in even a modicum of light: sallow skin stretched taut over prominent, sharp bones; predatory eyes which reflect a haunting pale yellow color.  Some gravekinder, perhaps the older ones, sport visible fangs or tusks.  In most specimens, hair on the head and body has fallen out completely, and the finger- and toe-nails have grown into wicked, dirty claws.  Their clothing is often in tatters - what use has a corpse for modesty? - but some woodsmen claim to have seen gravekinder attacking a coach and stripping their victims for their clothing - no doubt to some nefarious, obscure end.

Although they prefer the taste of mankind, gravekinder can and do subsist on animals with little difficulty.  While wolves or other natural predators might target the weak and the old amongst a herd of deer or elk, the gravekinder need no such crutches, pulling down the largest and meatiest animals with aplomb.  It is said the claws of the gravekinder bear a paralytic poison which affects bears and moose as easily as it does man, woman, and child.  Many gravekinder live and hunt in packs, and seem to have an uncanny awareness of where their packmates may be - and whether they have been destroyed.

Although they display great cunning and intelligence - as compared to the shuffling dead raised by sorcery - the gravekinder must be some sort of similar creature, as they too can be temporarily banished by the proper holy words.  Those slain by gravekinder sometimes rise the following night as new gravekinder; it is not uncommon for the mouths of the dead to be stuffed with holy scripture in an attempt to prevent this kind of dark resurrection.  And yet, some say that the dead may rise for no discernable reason - perhaps motivated by some lingering darkness within, a hatred or longing which transforms them post-mortem into gravekinder.  Of particular note is the tale of No-Nose Wilkins, who was hanged alongside several of his conspirators for banditry.  The corpses were left to hang overnight, and in the morning, No-Nose and two of his friends were gone, the gallows-ropes snapped cleanly.  A week later, the village was raided by a pack of a dozen gravekinder - including one with a noose around its neck, and lacking a proboscis.

TERRIBLE TRUTHS
There is a simple reason the gravekinder (ghouls) seem so different from other lesser undead (zombies, skeletons) - they are not the reanimated dead in any traditional sense.  They are, instead, fleshy suits piloted by the tiny necromantic spiders nesting in their brains.

The ghost spider is very small - four or five could sit comfortably on a dime - and nearly translucent when seen in the light; in twilight, it is near-invisible.  The ghost spiders are an ancient and malevolent intelligent species, merely a single caste - the scouts and hunters - of a larger, sinister society of spiders which forms the body of the Web of Darkness.  Thus are gravekinder found in the service of all manner of evils in Wampus Country.  Ghost spiders enter a humanoid corpse - either through ear or nose, or by burrowing through the flesh itself - and make their way to the remnants of the corpse's brain.  Once settled in, they plug themselves into the vast neural network of the body, and reactivate it - this is their natural skill, and they are bred for it.  Now recharged with necromantic or 'negative' energy, the corpse is animate as a gravekinder, and the ghost spider may 'drive' it.  It takes only minutes for the ghost spider to become accustomed to the neurology of a particular corpse, and bring to bear its former agility and strength.  Older, more skilled ghost spiders can access the muscle-memory of the corpse, and thus its fighting instincts; in some rare cases the spiders are able to pluck actual memories from the brain-tissue, and use this to their advantage, learning about entire families or business enterprises from the corpse's knowledge.

When a gravekinder consumes the flesh of the dead, a small portion of necromantic energy is generated which feeds the ghost spider; this process is inefficient, thus gravekinder always seem to be ravenous and willing to eat.  Given time and proper feeding, the ghost-spider can cause its mount to change shape in minor ways (growing claws or fighting-tusks; lengthening arms and legs; reinforcing the ribcage and skull; developing musk sacs) by the exertion of will.  At egg-laying time, the ghost-spider will exit the brainpan and lay its eggs in a sticky, milky-white paste under the nails and behind the teeth of its mount, to better implant them in a victim.

The ghost-spiders themselves are devilishly difficult to kill; when the gravekinder sustains sufficient damage to shut down, the ghost-spider will either flee immediately through a tear duct or nasal passage (or previously-burrowed sally port in the back of the skull) or, if reasonable, wait until the aggressors have departed, then casually find a new mount nearby.  Despite every other explorer or woodsman having destroyed handfuls of gravekinder, their numbers never really seem to dwindle - and this is the reason.  Ghost-spiders communicate with one another verbally, through their mounts; hatchlings from the same brood also possess a limited form of empathy amongst themselves, and will often join together in a pack.
Posted by Erik Jensen at 9:59 PM