I forgot I had a half-finished random table of mounts sitting around; so I took a couple minutes and finished it up.

The 'mundane' column tells us something about common mounts and pack-animals in the Wampus Country - horses, donkeys, some alpaca.  'Wealthy' includes warhorses and such, as well as moderately-unusual mounts that eccentric folks might keep.  'Unusual' is weird but nonmagical, and 'Magical' is...well, you get the idea.

You could use a table like this when someone casts mount and randomize the outcome (I'd say roll a d6 and add the wizard's level, 2 mundane, 3-6 wealthy, 7-12 unusual, 13+ magical or something like that).

Some definitions for Wampus Country purposes:

horse - a pony, palfrey, or work-horse, pretty average and not trained for combat.

courser - a horse bred for speed.

riding-snollygoster - any of a number of bipedal or semi-bipedal saurians suitable for taming and riding (like a duckbilled dinosaur, for example).

ponderous snollygoster - any of several huge (between rhino and elephant), quadripedal snollygosters (like a triceratops or styracosaur).

double-gator - a monster the Boy came up with, like a Pushme-Pullyu (a head at each end), but it's a giant alligator.  I seem to recall one head breathed fire and the other ice or something; I need to stat this up.

lil' twister - bigger than a dust devil, smaller than a full-grown air elemental, these adolescent sentient cyclones roam the prairie and are occasionally tamed as riding animals (a la Pecos Bill, but smaller).

chrome mustang - a shining silver-and-red (or silver-and-whatever) magical horse, apparently composed of metal and quite fast.  The creature is exceedingly rare, and said to be blessed by the Lost Gods of the Sixty-Sixth Path, who watch over travelers. 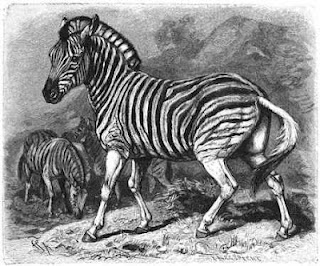