Carrying the Eye of the Leviathan with them, the Company of the Black Pearl (now joined by ranger Little Crow) set out into the wilderness to seek fortune and glory.  I'd thought the campaign might have a more maritime bent, but these cats were determined to avoid even the beach.

The four companions find their way to a ruined keep, and quickly deduce that it is held by some of the rapacious goat-men that have been sighted in the region.  Welcome to Sailors on the Starless Sea, adventurers...   They scout the grounds, do the usual, and eventually end up in the subterranean chambers beneath the keep, where the chaotic goat-men are attempting - nay, succeeding - in raising a lesser daemon-type chaos champion-thing.  There's even a convenient ziggurat for a climactic battle, which the Company wins.  I think Sailors is well-enough known that I don't need to go into it too much - it's a fine adventure (a bit linear once you hit the underground, but so be it).

Of note, since I was running the adventure modified for these 5e characters - now 3rd level or something - there were some consequences of my choices in play.  First, for this run I kept the goat-folk's original hp, despite the PCs not being zero or first level.  I call this the "paper people" implementation, and it definitely lets PCs mow through minion-like baddies when it's appropriate.  I also use this gimmick pretty extensively in the duet campaign I run for my son.  On top of this, you have 5e spellcasters in the party, so by the time we were doing the ziggurat encounter, one of the casters - I presume Viktor - threw an enlarge on Big Derek so he could step easily up the step-pyramid and powerfully bat goatboys into the water.  Pretty neat scene that I wouldn't have predicted - and that's why we play, right?

At the end of that session, the Company is in a dragon-headed boat being pushed out into a subterranean lake - the eponymous sea.  I had them went their way through various tunnels on an underground river until they could sail no more in a ship of that size.  The PCs were beached, with two obvious choices (besides try to head back, of course): on the left, a boarded-up tunnel with warning signs about danger and certain death.  On the right, what looked to be the remains of the entrance to a probably-dwarven mining facility, long-abandoned.  Electing to explore the abandoned mining facility, the Company of the Black Pearl walked into Glitterdoom, albeit on a lower level instead of at the surface, and they proceed to explore that location sort-of backward.

Glitterdoom is a Goodman Games 5e adventure by Michael Curtis that involves ghost-dwarves and greed.  It's straightforward in setup but there are definitely options to explore in playing it.  It's the only one of the Goodman 5e modules I've run, so I can't much compare it to the others, but I think it's a good 5e adventure overall.

By they time they escape the haunted mine, they're a little roughed up and have actually missed the Medium Bad in the adventure...although they do come back later.  And they return to that keep again later, as well, since they deliberately skipped the Scary Devil Church upon the surface.  This is an aspect of the player-driven campaign that perhaps we don't see much in a forced narrative game - the players have the ability to return to previously-explored places at any time.  And when the Company of the Black Pearl returns to the keep, they make it their own... but that's a tale for another time. 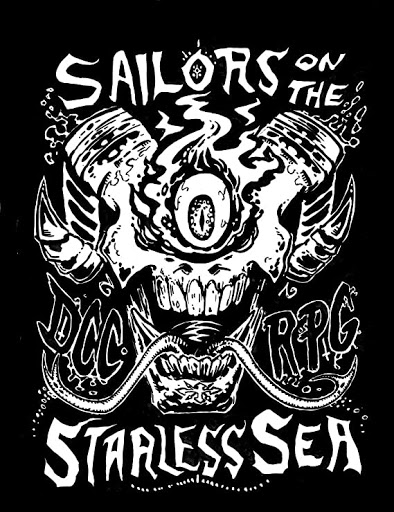 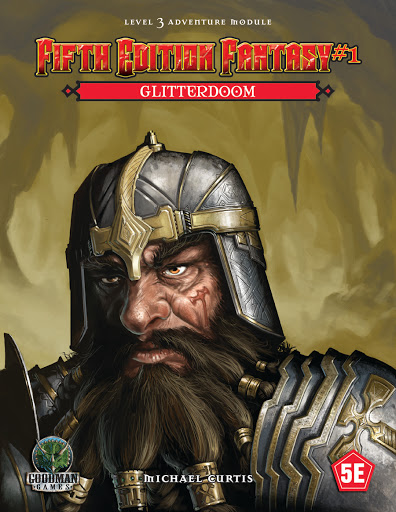 Can I take a moment to whine about the Goodman 5e adventure covers?  I hate them.  It's not a technical thing, it's the fact that someone chose to make them all NPC (or PC) headshots instead of action shots.  The first handful of covers don't necessarily have much to do with the adventure within, so I was definitely convinced that Goodman was using up headshot paintings to which he already had the rights.  Later covers are obviously painted based on the content of the module, but they're still...headshots.  I just don't get it.  Why doesn't Glitterdoom have a badass ghost dwarf on the cover?
Posted by Erik Jensen at 3:00 AM