In the Long Ago, when the tumbleweed deserts of Wampus Country were known as the Painlands, and iron-thewed warriors crushed the skulls of rival city-states under their sandalled feet, True Love seemed but a myth.  The world was primarily composed of the base elements of misery and suffering, even after civilizing forces like the Empire of Koz ruled from horizon to horizon -- what time was there for even the most pedestrian love, let alone something mythic and compelling?  Into such an existence came the experimental art of love sorcery!  Dangerous, volatile, difficult to harness - but impressively powerful when carefully cultivated and aimed, love sorcery was popular as a fad among the wizards of the Painlands for nearly a generation before fading into obscurity.

The basic art required as a focus a token of love.  This object could be a piece of jewelry, a perfumed scarf, lock of hair, a cameo, or even a morbid relic of a lover; whatever its material form, the token of love had to be invested over weeks with the emotional charge of a properly-inspired lover (not necessarily the caster creating the talisman).  Soaking in tears, direct exposure to erotic moments, sitting in a brazier which burns a stack of love letters - all possible methods of infusing energy into the token via sympathetic magic.  What few records we have from that time period suggest that while most tokens of love were charged up with ongoing, romantic love between two partners, there is passing mention of tokens based on unrequited love and even filial love.  A token of love does not last forever, for it is but a representation of the love; the token must be recharged every 90 days to retain its functionality.

Once the talisman is suitably invested, and the spellcaster has attuned himself to it for several days' time, then the token of love has three powers:

Cupid Speech - While holding or wearing the token of love, the bearer (who need not be a spellcaster) can speak to spirits of love and similar supernatural creatures associated with romantic love.

Love's True Face - While holding or wearing the token of love, the bearer will always recognize their love and cannot be deceived in this way by disguise or illusion - they will always see their love, even if shapeshifted, etc.

Sorceries of Love -  The token of love can be used to learn (via ecstasy), memorize, and cast certain spells of love sorcery, learned no doubt from love spirits (cupids and so forth).  Despite the name 'love sorcery', typically these spells do not create or catalyze romantic love - instead the love in the token is used to fuel completely different, often defensive, spell effects.  Examples of love sorcery spells alluded to in the recently-unearthed Codex of the Broken Heart follow; different versions of them may have borne different names in antiquity.

The caster makes the traditional wizard's 'gun fingers' gesture with the token of love clasped in one hand, and aims at a target capable of love within sixty feet, then triggers the evocation with one or more pelvic thrusts.  A blast of pink or reddish eldritch energy flies forth from the casters' fingers and inflicts 2d4+caster level psychic damage to the target, no to-hit roll necessary.  If the target's lover is within one mile, they, too, will suffer 1d4+caster level points of psychic damage.  Be careful you don't assault a town guard and accidentally murder his wife four streets over.

Hit Me With Your Best Shot (level 1)

Holding the token of love against their heart (even if it's already hanging there on a chain; you need to use one hand to keep this spell going), the caster calls upon the powers of love to preserve them from harm.  So long as the caster is holding the token thusly and concentrating, his armor class against ranged attacks (including magical attacks which require a to-hit roll) is improved by 4.  A level 4 version of this spell, supposedly called Love Is A Battlefield, extends the protective effect to four willing creatures who remain within five feet of the caster.

I Want to Know What Love Is (level 2)

The caster holds the token of love between both palms as if in prayer and concentrates on a sentient creature within 120 feet.  After several rounds of concentration, aligning their love chakra with those of the target, the caster may then use the token of love to "dowse" for the target's actual lover, true love, or unrequited love (the caster does not choose; the spirits of love will lead you).  This spell acts otherwise as a Locate Object spell, with similar duration.

Love Will Tear Us Apart (level 2)

Presenting the token of love with a forceful thrusting motion, the caster telekinetically shoves one target (typically an ally) up to (caster level x 5 feet) away.  Said target receives a save vs spell to resist, but if the target is an ally and the caster is acting to protect the target (ie to push it out of range of an incoming fireball or similar), the save is at -4.  The spell will not function on targets that weigh more than twice as much as the caster (no shoving iron golems).  Rumors suggest this spell has a reversed version that will, in fact, Keep Us Together.

Another defensive sorcery, this incantation requires that the caster place the token of love in their trousers or skirts, and rhythmically bob their head with a force sufficient to addle the brain.  For a number of rounds equal to the caster's level, they are immune to pain (but still take damage) and resist all fear and charm effects (including the pain of romantic rejection) - continual movement of the body and head are required to keep up the spell.  The caster may extend the protective aura to one willing companion within five feet if the target also performs the necessary ritual movements. 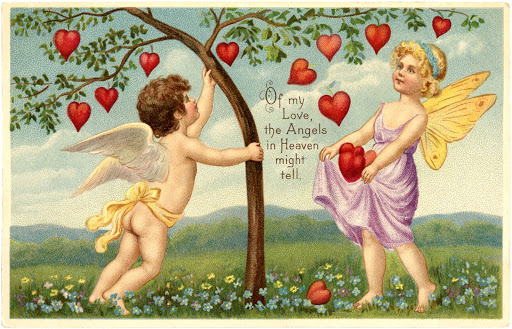