Pips, Hulk, Go-Boom, and Josshua, after working together to build/install the wrestling ring Hulk wanted in their new subterranean digs, realize there are some loose ends down there.  It's Go-Boom and Josshua's first time in the chambers beneath the tower, and they are very quickly appalled at the fact that the Gitters left the place insecure.

First, the quartet investigates the rat tunnels, encountering some giant ("Baltimore-sized") rats which are quickly dispatched.  The tunnels seem to go on a long way, it's quite a maze and probably a significant nest, so rather than try to fit further into rapidly-shrinking rat tunnels, Josshua uses magic to collapse the tunnels.  The group spends a day cleaning up some of the major rooms to prep them for regular habitation.  There's a lot of talk about using the immense room as a wrestling arena (with an audience), and the adjacent room as a bar.  Go-Boom suggests pushing together all the sarcophagi to use as a fashionable bartop.  Note that the Gitters are wary about opening the sarcophagi, and have yet to do so.  The last time I used this module, that group was afraid to open them as well.  What gives, modern player?

Next they investigate the underground lake.  I'm using The Ruined Tower of Zenopus here, but rather than have the edge of the map poke out into a sea cave, since we're definitely inland it is instead a large cavern with an subterranean lake, leading to a system of underground rivers.  Plenty of opportunity for spelunking, and they have the map in Lord Halitosis' spellbook to intrigue them...

They lack a boat, so rather than getting a boat before investigating, Josshua uses shape water to make an ice bridge so they can walk out a good ways into the dark lake and see what's what.  Doing so, they learn of the underground river, then return to the beach.  A mystery for another time, perhaps, but they aren't 100% certain where they are on the map as a starting point.  The original Critter Gitters have forgotten that they were told the old tower was the 'Tower of Zenopus'... 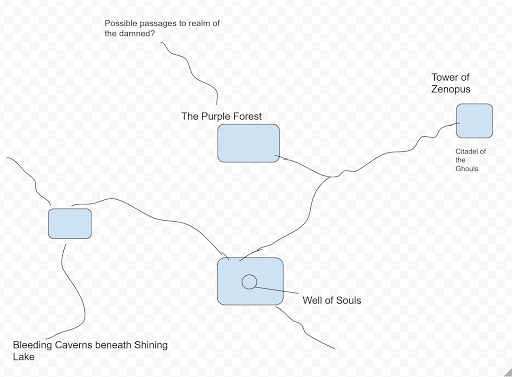 They resolve to ask the enchanted Brazen Head in the dungeon, and the Head confirms that this, indeed, is what remains of the Tower of Zenopus.  So now they know generally where they are on the map, and they resolve to get a boat in time, but they start to get worried about that 'Citadel of the Ghouls' entry so close to their current position.

It dawns on them that on the original sortie into the dungeon, they did engage some ghouls in one room, and heading over there they are reminded of the door that led to an earthen tunnel (which they had noped out of previously).  Probable ghouls?  They gird their loins and head in, and almost immediately they are hit with the scent of rotting meat.

The tunnel descends and they find themselves in a new part of the complex (I scrambled to grab a Dyson Logos map!), where they can hear ritual chanting up ahead.  Comprehend languages tells them the chant has something to do with 'rising' and 'conquest' - always good to know. The prospect of a dozen voices did not frighten them, but they did jaunt down a side passage first, encountering a lone ghoul who was wearing some mismatched armor and carrying weapons.  He was easily dealt with but they knew now these were no ordinary ghouls, perhaps.

In an instant they can hear the chanting has stopped, and realize that the reports from Pips' pistols has alerted the complex to their presence.  The Gitters move to the next room, trying to throw a magic earthen barricade behind them.  In a moment, they have a pack of ghouls charging at them from around one tunnel-corner, and another group trying to claw through their earthworks behind them.

Comment: ghouls in 5e are either really scary (ie you have a low-level, crap-AC party) or not scary at all (you have a low-to-mid-level, high-AC party).  We have the latter.  Go-Boom and Hulk stand shoulder-to-shoulder as a bulwark against the eight ghouls at the south end, take almost no damage, and supported by Josshua's magic, destroy those ghouls.  The remaining ghouls at the north end retreat, scurrying into the darkness. At the south door, something heavy is dragged to block it from the other side as the ghouls pull back, but Go-Boom isn't having it - he uses his considerable strength to force that door open, and three more ghouls are destroyed as the combat continues.

A voice rasps out from the shadows, offering a chest (really a foot locker) the ghouls have left over by the stairs in exchange for the interlopers' departure.  The Critter Gitters aren't buying it, and resolve to push onward into the Citadel of the Ghouls...meanwhile the voice that was leading the ritual chant previously maneuvers around to a different room to fetch the [REDACTED] for the coming violence...