Hat-tip to Jack of TotGaD for sending this pic my way.  This first bit is yanked from a G+ convo the other day.  Ladies and gentlefish, the Moosocampus. 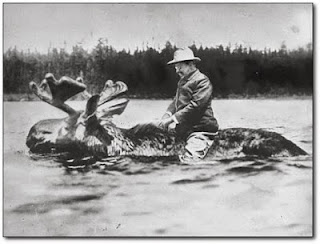 Tis a lucky adventurer indeed who manages to tame a moosocampus, whose strong back and finned limbs can carry a seeker-of-gold quickly across the water, or even underneath it; for he who licks the magic antlers of the moosocampus can breathe water for a turn. Constant antler-licking may be required for deepwater exploration.

The nongendered moosocampus reproduces by capturing genetic material from the fish it eats and combining it with his own, laying eggs quite sensibly once a year in a submerged nest which it defends vigorously, sometimes going so far as to hire mercenaries to patrol the area during the crucial last week of incubation. Although they are quite intelligent and speak fluently, moosocampi are burderend by a congential curse; each moosocampus must deliver its speech in the cadence of a popular song, which becomes its name amongst both moosocampi and men.

The pictured specimen, Won't You Come Home, Bill Bailey, spent some time as the willing steed of the adventurer Arthur 'Scissor-Face' O'Gowan, also pictured; their association came to an end when O'Gowan was callously shredded to pieces by razor-eels after a night of careless drinking. Such is the tale the moosocampus told local authorities, and one presumes he meant that O'Gowan was the one doing the reckless drinking, but one should never discount the possibility that it was the razor-eels who had been raucously tippling. In any case, the outcome was the same.

Shavings from moosocampus antler can be used as a major component in crafting potions of water breathing, as one might expect.﻿

The takeaway lesson is that I write silly stuff very quickly at 9am, especially if it's got a moose in it.  Which of course brought up Teddy Roosevelt, which led to the resurrection of this old thing, from a "Stat Teddy Roosevelt for your game" thread on the RPGSite...

Special ability: Legendary moustache. Over a decade ago, Teodor was rewarded by a fae countess with a strange blessing - so long as his moustache is of a certain length, Teodor receives +2 to all his saving throws.

Standard gear: Lord Teodor has at his disposal some very fine arms and armor, but unless clad for battle, he tends to wear garish, patchwork hide-and-leather armor constructed from the pelts of beasts he has killed himself. Complimenting this ensemble is a cloak of displacement enchanted from the skin of a displacer beast Teodor killed - reportedly - with his bare hands. He is skilled with bows and crossbows, and usually bears a battleaxe. Teodor also often wears a pair of enchanted spectacles which heighten his senses and increase his ability to detect secret doors or track animals.

After spending the bulk of his life as an adventurer and explorer, Teodor became embroiled in local politics at the ducal level for several years. Now, following the assassination of Wilhelm of Kinlay, Teodor has taken over lordship of the area, equivalent to a Marquess. Although he offers fealty to the King and is generally loyal, Lord Teodor has quite an independent streak, and has acted against the merchant guilds on more than one occasion. He is sympathetic to young adventuring-types, and might make a suitable patron, especially for a brash warrior or outdoorsy type.﻿

Obviously this Teddy was written up during the "proto-Wampus" phase of the campaign several years back, when there was a lot more medieval stuff going on.  Now here's something a little different...

FURY OF THE VINCAL
In the time of Grandpa's War, the general desire to experiment magically was quite low, especially as regards sorcerous transformation of people.  The previous generations' failures with gigantism were fresh in memory, and no state or association of consequence would fund such experimentation.  Independent wizards, however, continued their research unhindered, certainly if they had access to ill-gotten gold or strong revenue streams obtained via investment.  One such sorceror was Vincal, who had certain theories regarding lycanthropy and sought to put them to the test.

Vincal's chief idea, to truncate a lengthy magical paper he published, was that the issue with lycanthropy lay in the nature of the beasts wedded to the curse.  Wolves, bears, tigers - all predatory species which, according to Vincal's manuscripts, were ill-suited to human adaptation (note that wereboars were relatively unknown at this time, and werebats unheard of).  The wizard sought to create a strain of lycanthropy using a powerful herbivore - in this case, the moose - which could be injected into volunteers.

This feat was managed on a small scale, and Vincal successfully transformed about a dozen men and women into moose-kin, both bull and cow.  The serum did exactly what the wizard wanted it to do - transform normal humans into towering half-moose warriors.  These semi-lycanthropes, which bred true, did not fully shapechange into moose, but instead took onto themselves characteristics of the beast - size, strength, powerful antlers.

Unfortunately, certain then-potent authorities caught wind of Vincal's experiments, and ran him and his moosekin out of town.  Pamphlets were circulated condemning the "Vincal Heresy", and soon all the mooselings bore the wizard's name.  As Grandpa's War came to a head, the predictable occurred - the Vincal came out of hiding in the piney woods and struck at the forces of Law in a series of brutal raids.  There could be no turning back - the Vincal were now not just politically condemned, but murderers in the eyes of most people.  Special agents were recruited to track down the wizard who started the mess, the lead bull, Vincal himself.  The wizard snatched up his familar and headed for the hills, leaving his moose-kin "offspring" leaderless and trapped in the midst of a nasty war.

Today, the moosekin dwell in small bands, here and there in the mountain-woods, biding their time.  When Chaos surges once again, the children of Vincal will be ready to strike at civilization once more.