Faking a Hexcrawl: Part One, The Coalpepper Expedition

Recently I ran a Wampus Country play-by-post over on G+, and it was quite an experience.  I'm going to use a couple blogposts to reflect on the whole shebang and see if I learned anything that can be passed on.

Rather than do a "delve" type scenario, I wanted to get back to one of the original concepts for the setting, which was the Oregon Trail.  Why not do a play-by-post that followed a wagon train, rather than a small party of adventurers?  The question was...how to do it "right"?

THE COALPEPPER EXPEDITION: The Play-by-Post Aspects

I had previously run a small-party PbP that didn't quite work, for all the usual PbP reasons - inconsistent timing of posts (mine and theirs), players dropping/disappearing, etc.  So I set about formulating this "expedition PbP" to cope with, or even use, those usual troubles.

Since we were talking about a big cross-country expedition, we could have a ton of players.  It made sense in-character, and if folks disappeared or couldn't participate at some points, it wouldn't be a big deal.  Those PCs would be back with the wagon train rather than out exploring for that period of time.  We ended up with twenty-five player characters involved in the PbP, most of whom posted every turn.

Which brings us to the turn sequence!  Rather than run most of the PbP as a constant flow of time (as you might with a dungeon-delve), I decided early on that we'd be better off with more of a wargaming campaign structure.  There would be "Expedition Turns" wherein I would do some description, and then PCs would give general reactions or peel off into groups to explore particular features or address problems.  Very rapidly it became habit to post an Expedition Turn with a few "things to address, or not" listed in them, and players would assign their PCs to one of those issues or missions.  Then another thread would be started for each mission.  Expedition Turns took place an arbitrary amount of time apart from one another - sometimes it would be several days later, sometimes the next day, whatever made sense to the narrative.

So here we see the main issue in comparing the Coalpepper Expedition to a "proper" hexcrawl: I drastically limited player choice throughout.  Players knew they could come up with stuff and set their own goals, but most didn't - they waited for some options, and then applied their creativity to dealing with those options (rather than coming up with new options most of the time).  Call it "impure" from a hexcrawl standpoint, but I think it was necessary to keep the PbP flowing - after all, we had 25 characters!

Yes, there were "railroad" aspects to the "wagon train", but I think it worked, and it wasn't exactly a bait-and-switch on the players - they understood the format of the PbP before signing up.  The up-side to the heavy filtering was that, for the most part, we didn't "waste" much time describing or playing out the less-exciting parts of a wagon-train across the vast plain.  Those bits could be narrated, hand-waved, alluded to, or whatever else seemed appropriate at the time.  We only played out the "interesting" bits.

As the game continued, we had a few players drop out - either they got too busy to check in regularly, or the format of the PbP just wasn't their bag - and it was no big deal, as we still had over twenty characters manning the expedition.  And while there were times when it seemed that certain PCs were becoming friends or allies, generally speaking everybody mixed it up.  Nobody was forming (ic/ooc) cliques and only playing with one group of people, and from my POV it looked like players were deliberately sending their characters on different missions in order to get play-time with as many other characters as possible; that was great to see.

Next time we'll talk about how I populated the hexes on-the-fly.  Sort of.  It does say "Faking a Hexcrawl", after all. 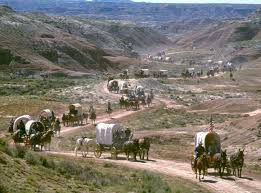