Swords and Wizardry of Wampus Country 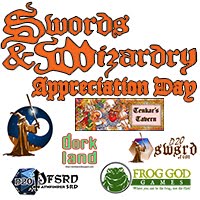 Seeing that it's Swords & Wizardry Appreciation Day, let's talk about swords.  And wizardry.  Rather than spend a bunch of time going over what I like about S&W (short version: it's free and everybody puts out stuff for it which I can use in my LL game), today's post is going to be a big ol' mess of stuff along those two themes.  Swords!  Wizardry!  I promise not to keep you long, as I know you have over a hundred other blogs to check out today.

As it's been a while since I posted a multi-column d100 wondertable, here's one about swords.  You know, magic swords of the sword & sorcery variety.  This table doesn't cover the 'plus' of a sword or anything like that - it generates other details, like so:

The BLADE column gives a description of what the blade is made of, or something unusual about the blade itself.
The DECORATION column contains a seed-of-inspiration to assist in describing the sword's decoration on-the-fly.  Some entries are specific about pommel, quillions, etc - others are just a decorative theme, like an animal.
The FEATURE column contains either a minor curse, minor power, or other side-effect of the magic blade.
The two KENNING columns can aid in generating a legendary name for the blade; I suggest either AB ("Kin-Slayer") or B of A ("Butcher of Traitors").

As with any Wampus Country multicolumn goodness, the entries are meant to spark inspiration or push you in new and unexpected directions.   Secret hint: most of the stuff in that table would work for magic weapons other than swords.

If you're new to Wampus Country (and that's what Appreciation Days and blog carnivals are for, right?), there are a couple of wizardly things at hand in which you might be interested.  Playing a wizard?  Running a game containing one or more wizards?  Wampus has you covered.

The Wampus Country Arcane Abecediary contains 78 wizard spells suitable for use with pretty much any of the old-school cousins; the spells in the document, much like everything on this blog, lean toward the whimsical.

d100 Magic-Users is a multicolumn table which generates wizard nicknames, quirky goals and hobbies, appearances, and familiars.  Perfect for fleshing out an NPC (or a PC, if you're bold).

d100 Arcane Books will give you a title and non-spell contents for a tome which might interest a wizard.

The Big Elixir Table is, sadly, not a d100, it's just a d20 - but it does have ten columns which, combined, can generate a cool-sounding recipe (components and method of mixture) for a potion or panacea.  Follow that up with d100 Potions, which is exactly what it sounds like.

And, since I'm apparently spamming every tangentially-related table, check out d100 demonichaos to help with generating chaotic names, and d100 Fairyland Weirdness should you require...well, fairyland weirdness.  Further, if you're the sort of wizard who likes to breed bizarre hybrid monsters (or a DM who's interested in reskinning monsters), I contributed a short table-filled article on just that topic to the Game Master Annual.

Hey!  You there, complaining about these tables not being in pdf!  You can save them off as pdfs from the google-doc.  You can also make a copy and customize the table yourself so it better fits your campaign that way.