The Great Khan put out a call for viking-themed one-page dungeons over here.  The contest is ongoing, and runs through October 1st.

You can take a look at my submission right here.

It's called The Kvasisgaldr Road, and involves sword-brothers walking the 'road' of an ancient runic petroglyph in order to experience an ecstatic journey which will create a deep bond prior to undertaking something big - a quest, a war, whatever.  It's short - I think it's a single session, or maybe less, depending on how things are run.

I was having a difficult time trying to figure out what I wanted to do with this submission.  I'd never done a one-page dungeon before, and I was bothered by my lack of artistic ability.  Worried that any map I did would turn out like crap anyway, I finally struck up on the idea of doing a map shaped like a rune, since it was viking-y and would allow me to use a simple shape for the map.  Rune, map - petroglyph!  The rest of the thing wrote itself pretty quickly, although I'm second-guessing myself now about whether I got the point across despite the brevity.  I wanted to give it a shot, but I didn't spend much time on it, as I've been mostly working on my dungeon for the Secret DM's contest, which is much longer and more involved.  Of course, shorter formats are sometimes more demanding in their own way!  Since the dungeon I'm writing up for the other contest is tundra-based, I could plop this one-pager down nearby pretty easily.

Who knows what I'll think of this one-pager when I look back on it in a few months.  I like the general conceit of vikings eating magic mushrooms and walking a rune-shaped petroglyph "road" in order to have a shared ecstatic experience.  The actual encounters on that road?  Meh, they're vikingish and related to the theme of the setup, but I don't think there's much there compared to some of these one-page dungeons we see with twenty rooms jammed in there.  But if the only takeaway is the gimmick - which I think is potentially worth stealing, even if you used a different sort of sigil or something - I'm okay with that.  It was fun to have the idea hit and then try to power through the writing; the point of the exercise, as always, is to attempt to produce something decent quickly and just go where the ideas lead. 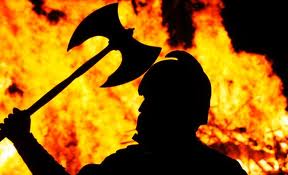