A handful of dungeon-writing contests of which you should be aware...

http://sorcerersskull.blogspot.com/2012/08/gimme-your-weird-adventures-contest.html  Call for adventure seeds for Weird Adventures.   Due Sept 17.

I love contests like this.  I haven't always entered, but I always think about entering, and I need to get better about actually following through when these crop up; even if I only hit 50% of the ones I spend think-time on, that's a good thing.  Setting parameters and deadlines forces you to squeeze your creativity (and writing-discipline) in new ways, and that's precisely what I want.

I've already submitted my Weird Adventures hook - that was "easiest" of the three in some ways because it didn't involve any mapping or stats or anything, just rumination on a pulp theme, add a dash of weird, and type up a short blurb.

The other two are going to take more elbow grease, I think, but I have a direction in mind for where I want to go with them.  I have to set some parameters for myself, though, namely that whenever possible stuff I do for contests like this has to also be somewhat applicable to my own campaign - trying to make good use of writing-time, after all.   Earlier this week I loosely sketched out some zones and ideas for an 'adventuring area' (which includes the dungeony bit as well as some wilderness) to meet the requirements of the Secret DM contest.  We're headed for the icy tundra!  The contest rules limit the amount of 'backstory' in the entry, but I suspect I'll generate some blogposts with the cutting-room scraps.  (What, the judges don't want bonus pages of rambling about the cultural mores of talking polar bears?  Shame on them, I say!)

Since I just learned about the Khan's contest (Khan-test?  seems like a missed opportunity there) today, I don't have anything concrete in mind yet.  My first thought, since the one-pager is supposed to be viking-themed, or at least viking-appropriate I guess, would be to do something that I can drop into or next to the polar-bear-tundra thing when I run it myself.  Two birds with one stone.  The "vikings" theme is fun, but I know it's going to give me heartburn - the pull between "let's use classic viking tropes" and "let's ignore those same tropes" is going to be rough on this one.  Time to find something obscure to riff off of! 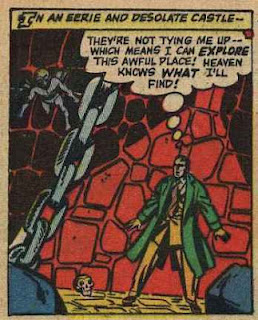