Tales occasionally reach civilization of a towering humanoid figure striding through the pine-deeps like a colossus, larger than any giant heretofore seen.  That creature is the Vegetitan, a massive colony of plants in the shape of a man, guided by some form of limited sentience.  It is unknown at this time whether the Vegetitan is a godling in plant form, a collective of treants, or something stranger; the sagacious Dr. Harcourt Runcible (late of River-Town) has written of his belief that the Vegetitan's origins like in some obscure vale, far beyond the territory thus-far explored. 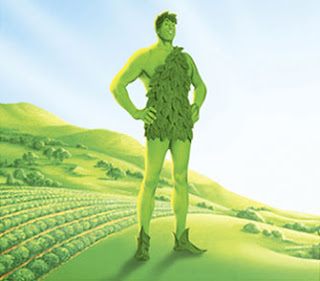 The Vegetitan walks like a man, yet has the ability to transform itself into a forest - this shapeshifting takes several minutes, and when complete, where once stood an enormous green man there is instead an expanse of trees, shrubs, and grasses. [1]

In either form, the Vegetitan maintains a symbiotic relationship with the sproutlings which bud off of its body in pods; these sproutlings - some call them vegepygmies - are smaller than man-sized and of average intelligence.  Typically a party of sproutlings is armed with wooden spears and short-bows, and they will fight to defend the Vegetitan, who is their parent and god.  When the titan is a forest, they live under the boughs of his trees; when he is a gargantua, they climb over his surface like so many lice and even prune the Vegetitan of dead or worm-nibbled leaves. [2] 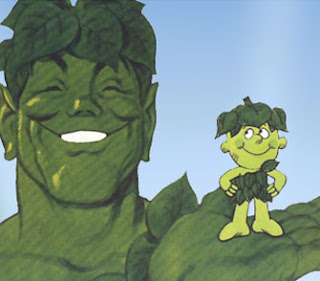 Although it is intelligent, the vegetitan rarely speaks, instead using its booming voice to intimidate enemies or warn animals away from a wildfire.  If forced to defend itself, the vegetitan wield both its obvious physical prowess and plant-related magic with aplomb. [3] 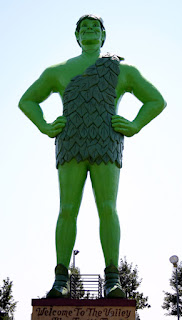 [1] The vegetitan's shapeshifting abilities conform automatically to the region in which it finds itself; deciduous trees, pines and evergreens, cactus, a field of wheat, magnolias and swamp-moss, etc.

[2] The gargantua is charged with life-magic, and eating a handful of his leaves or bark may (25% chance) act as a superior healing potion (1d12hp); there is also a chance (10%) that the leaves selected are poisonous.  The Vegetitan may spawn potion-fruit at will if it benefits him to do so, though he himself cannot partake of these potions.

[3] The Vegetitan has 25HD (30HD in Spring) and the magical ability of a ninth-level caster; all of its spells should be plant-focused or reskinned spells which then appear to be plant-focused (ie fireball is instead an exploding ball of rose-thorns, etc).  In times of absolute crisis, the Vegetitan may force himself to create a multitude of sproutlings; for each HD the Vegetitan sacrifices, 2d6 sproutlings are immediately spawned.