Sometimes when you're creating a dungeon, getting started is the hardest part.  If you need a 'seed' to get you rolling, try using an amusement-park map.  Any amusement-park map is going to have some shapes and pathways you can riff off of to create your dungeon map, as well as ride and attraction names which might inspire your monsters, traps, and treasures.  Having just returned from vacation in Hersheypark, PA, I'm going to use their map as inspiration to give this a shot (you may wish to open it in another tab and poke around).  Hersheypark was a good choice for me as a dungeon-inspiration map, as the chocolate theme suggests I drop this dungeon somewhere near the Candyland bit of Wampus Country...that's presuming, of course, that there's a chocolate thing going on by the time we're done mangling the map. 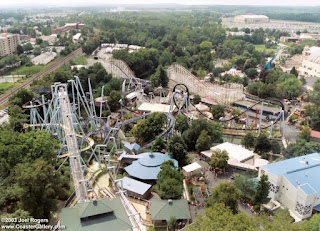 Let's look at the map as a whole, first.  Most amusement parks are broken up into areas or zones, each with a different theme.  Those are your dungeon sections and associated themes.  If you pull up the Hersheypark map in another window (it's pretty keen) you'll see that Hersheypark has the following zones:

1) Tudor Square - shopping village outside the main gate.  This is easily going to be the medieval village next to the dungeon entrance.
2) Founder's Circle - the hub.  Maybe this area is the zone once (or currently) controlled by the standard "mad" wizard, etc.
3) Music Box Way.  I want to throw some musical traps in this zone along with the ride-based monsters.
4) The Hollow.  Great name...could be anything.
5) Minetown.  It's a mine!  The dungeon writes itself!
6) Pioneer Frontier.  Perhaps rather than being a wild-west frontier, this is the dungeon's frontier with the Underdark or something.  Or a more-vanilla 'pioneer town' that sunk beneath the earth as part of a curse...cowboys versus drow, anyone?
7) The Boardwalk.  Mandatory underwater level?  Town on the shores of a subterranean lake?
8) Midway.  Could have game-related traps and tricks?  Or go metaphorical and be the portal between this reality and another?

Now obviously I'm not going to tackle a huge dungeon in a single blogpost, but this entry is meant to introduce the idea of using the theme-park map as inspiration.  At this point I'm not even worried about mapping - maybe sketch out the zones as boxes with some pathways connecting them; later we can write "secret tunnel" or "underground river" or whatever on some of those connections.  And we can tweak the relative sizes of the zones as well, as we go. 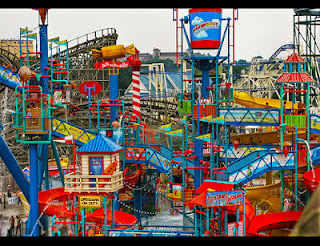 Take a look at the names of some of the major rides.  These could represent monster locations, a series of traps, or some kind of treasure, settlement, or rumor.  If you're the gonzo sort, some of these can be ported over without much change.  Starship America becomes a ghostly astronaut trapped in the dungeon in the wreckage of his ancient spacecraft, for example; Dinosaur-Go-Round (a kiddie ride) prompts some sort of prehistoric monster in that area.  Frankly, I like the idea of a creepy carousel in the middle of the wizard zone - especially if the beasts on the merry-go-round are alive, and "pinned" in place with metal poles like huge butterflies.  Imagine a carousel with an owlbear, some wolves, a peryton, a rust monster...  I'm imagining the Howler as a two-headed werewolf for some reason.  What's the Flying Falcon?  Freaking terrifying, that's what it is.  There's nothing more manly than holding onto a seven-year-old for dear life and muttering it's okay it's okay it's okay for the duration of a ride.  I'm...not into heights.

Larger rides, like roller coasters, might be bigger monsters or larger settlements.  That Fahrenheit coaster?  A clutch of fiery salamanders.  The Great Bear in Minetown?  Maybe a huge earth-elemental bear with diamond claws and flecks of gold and platinum in his stoney fur (now that's a pelt worth selling).  And you might go so far as to allow the form of a ride to shape what you do with it; how about a thrilling log-flume chase over some subterranean waterfalls as the PCs are pursued by their foes?

The point is that the theme-park map is chock-full of seemingly random crap that lends itself to a dungeonlike structure and can inspire monster placement and backstory.  I'm going to keep chugging along on converting Hersheypark into a dungeon, with periodic updates here.  In the meantime, throw "amusement park map" or "theme park map" into a Google image search and look at all the free inspiration lying around.