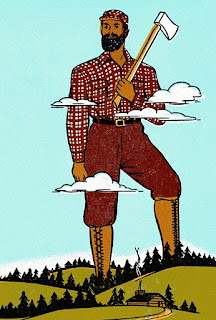 The gigantic lumberjack Paul Bunyan is well-known as an apparent staple of American tall tales...even if he's totally fake and was created for an advertising campaign.  The point is that the dude has some resonance, and there are potentially some cool things to be done with him in regards to Wampus Country.

Let's presume we're not - at the moment - interested in a giant so ridiculously big that his footprints become lakes after it rains.  Let's rein it in a tad and look at using Paul Bunyan as inspiration for some of the setting's giants.

Any time you're adapting (or stealing!) something for 'monster use', you eventually have to make the call as to whether the thing is a unique one-off (Medusa THE Gorgon) or whether you're going to rip it off into an entire species (medusas).  For our lumberjack friend, I'm going species.  In an earlier post, I tossed out the idea of using giants not as some sort of ancient legendary race, but as men magically transformed into giants, 'leftovers' from a previous war or something.  How long ago was this war?  In my mind, we're talking about two generations back, or "Grandpa Time" as I like to call it.  The sort of setting tidbit that can influence a backstory on a character or location but isn't so close in timeframe as to dominate things; and far enough back that we can mess around with two generations' worth of independent development.

Basically the vibe I'm riding right now is that the giants, after the war, were driven further into the wilderness, never accepted back in civilization after their usefulness as siege engines (or whatever) had ended.  So we have giants out in the hills, forests, and mountains, and a number of them take to doing what unemployed soldiers often did, which is brigandry.  However, some of them find other, more legitmate niches by which they can earn coin.  For example, working as lumberjacks.

If we go with the assumption that giants aren't welcome back in town, then perhaps we have giants working out in the woods, either independently or in small groups, felling timber.  They then carve their personal mark into one end of the log and chuck it in the river.  The logs float downriver back to River-Town where they are 'harvested' and tallied by the lumber company (who then does with them what lumber companies do).  Company agents use the giants' marks to keep a tally of who gets paid what - and occasionally the company sends riders out to set rendezvous points to pay the giants.  Obviously, travelling merchants want in on that recently-earned cash, so they'd roll in to the rendezvous points as well.  Quarterly, maybe?  Something like that.  That's a pretty cool potential encounter location right there, a Giant Rendezvous.

Anyway, when I gin up some encounter tables, we're going to need more than one 'giant' entry - one for the wandering raider type, and one for the entrepreneurial Lumberjack Giant. (05% chance big blue ox present)

Oh, and maybe an entry for this sort of giant as well:

Email ThisBlogThis!Share to TwitterShare to FacebookShare to Pinterest
Labels: giants